Article
Rabbit Enteropathies on Commercial Farms in the Iberian Peninsula: Etiological Agents Identified in 2018–2019
by

Digestive disorders are the main cause of economic damage in rabbit farms and, usually, antibiotic treatment is the first choice to control them. Nevertheless, a broad range of infectious agents can be involved in such disorders, as we have observed in our diagnosis work as a veterinary diagnostic laboratory. In this study, a global and updated overview of the frequency of detection of those etiological agents is provided. We have seen differences depending on the age of the affected rabbits, with young rabbits (<15 days old) being the most affected by enteropathogenic Escherichia coli strains, while in preweaning and growing rabbits, a coinfection of two or three pathogens is the most prevalent situation. Clostridium spiroforme and E. coli are the main bacterial agents detected in preweaning rabbits, but enterotoxigenic Bacteroides fragilis has just appeared as a new possible emergent pathogen. Coinfections between bacteria (C. spiroforme and E. coli), parasites (Eimeria spp.), and viruses (rotavirus) are much more frequent than simple infections in growing rabbits; for this reason, complete laboratory studies are required to establish on-farm disease control measures.

Digestive disorders are the main cause of economic damage to rabbit farms. This article provides a global and updated overview of the diverse etiological agents causing them, since 757 clinical cases were analyzed during 2018 and 2019—Ninety-five from young rabbits (<15 days old), 117 from preweaning rabbits (15–35 days old), and 545 from growing rabbits. Etiological diagnosis was carried out by bacteriological culture and a set of real time polymerase chain reaction (qPCR) tests for the detection of enteropathogenic Escherichia coli (EPEC), Clostridium spiroforme, C. perfringens, rotavirus A, Bacteroides fragilis, and Eimeria spp. Also, 40 EPEC and 38 non EPEC isolates were investigated for the presence of other colonization factors (afr2, ral, liftA, and paa) by qPCR. EPEC is the most prevalent agent in young rabbits, and although different virulence profiles have been found among EPEC isolates, the liftA+, ral+, and paa+ profile is the most prevalent. C. spiroforme and EPEC are the more frequently detected pathogens in preweaning rabbits, but B. fragilis appears to be a new possible emergent pathogen. In growing rabbits, diverse co-infections between C. spiroforme, Eimeria spp., EPEC, and rotavirus are much more frequent than infections due to only one of them. Other pathogens detected in very few cases are Salmonella spp. and Enterococcus hirae.
Keywords:
rabbit; digestive; Escherichia coli; EPEC; Clostridium spiroforme; rotavirus; Bacteriodes fragilis; Eimeria

Spain is the largest rabbit (Oryctolagus cuniculus) producer of the European Union [1], producing more than 53,000 tons of rabbit meat in 2018, with more than 3800 farms distributed across the entire country [2]. Among the challenges that the rabbit meat industry faces, the most important cause of monetary losses is related to digestive problems; these enteric problems mostly affect young animals, both suckling and growing rabbits, and they are responsible for high morbidity and mortality rates in affected rabbitries, as has been shown in other European countries [3,4]. At Exopol, a Spanish veterinary diagnosis laboratory, 58% of the clinical cases received from rabbit farms throughout 2018 were related to digestive problems. This percentage increased to 79.6% when analyzing growing animals.
Several pathogens have been described as causative agents of enteric disease in rabbits. Enteropathogenic Escherichia coli (EPEC) strains are one of the main etiological agents causing these disorders. These EPEC strains can be any serotype or biotype and, moreover, they do not produce known enterotoxins or Shiga toxins; their virulence is associated with intestinal epithelial cell damage by effacing the microvilli and attaching intimately to the cell membrane, producing “attaching and effacing” lesion and diarrhea [5,6,7,8]. Such lesions are due to the locus of enterocyte effacement (LEE) pathogenicity island that codes for the outer membrane protein called intimin (eae) among other virulence-associated genes related to the type III secretion system [9]. In addition to the LEE, several colonization factors, encoded by the afr2, ral, lifA, and paa genes, have also been found in rabbit EPEC isolates, but their roles remain unclear since there have been EPEC strain isolates lacking these rabbit-specific fimbrial adhesins, suggesting the presence of further potential adhesins that are not yet known [10].
In addition to EPEC, some other bacterial species have been defined as pathogenic to rabbits; one of the most important is Clostridium spiroforme. This Clostridium produces a binary toxin, similar to the iota toxin from Clostridium perfringens, which is considered as the principal virulence factor that causes enterotoxemia in rabbits [11]. It can be found at the late stages of digestive disorders and sometimes has been associated with antibiotic-treatment-related dysbiosis [8]. Another important bacteria-caused disease in rabbits is salmonellosis, which is characterized by metritis in does and septicemia in young rabbits but also causes digestive clinical signs in growing animals [12]. Besides bacteria, parasites also play a pivotal role in enteric disease, with coccidian protozoa being the most important parasites implicated in enteric rabbit diseases, causing considerable economic damage to rabbit farms. Among the rabbit-infecting coccidian protozoa, at least 11 different species of Eimeria spp. Have been described, and the severity of the process has been related to the Eimeria species implicated and the infection degree [8].
Other etiological agents that have been accepted as potential pathogens, whose presence has been related to several risk factors (such as treatments, inappropriate feeding, or climatic aggressions, among others) and can induce enteric problems, are group A rotavirus [13], C. perfringens [14], and Enterococcus hirae [15]. More recently, enterotoxigenic Bacteroides fragilis has been pointed out as an enteric pathogen that causes severe disorders around the weaning period [16]. Therefore, it is necessary to take into account the possibility of intercurrent agents in an observed disease.
The objective of the present study was to describe the etiological agents identified in samples of the digestive processes of young rabbits (<15 days old), in pre-weaning rabbits (15–35 days old), and in growing-finishing rabbits, sent by veterinarians to our laboratory during 2018 and 2019.

A total number of 757 clinical cases (samples received from an affected farm at an outbreak) coming from 363 different commercial rabbitries were analyzed in this work. We received samples in the laboratory from January 2018 to June 2019 coming from elsewhere in the Iberian Peninsula (Portugal and continental Spain). Received samples were consistent with digestive organs or caecal swabs collected by practitioners from clinically affected growing rabbits. In each clinical case, samples from 3 to 5 animals were analyzed. Of the 757 clinical cases, 95 were due to gastrointestinal disorders in young rabbits (<15 days old), 117 cases were from 15–35 day-old rabbits before weaning, and 545 affected growing rabbits.
Bacteriological cultures and a set of real-time Polymerase Chain Reaction (qPCR) assays for the detection of EPEC, C. spiroforme, C. perfringens, and Group A rotavirus were carried out in 100% of clinical cases (n = 757), whereas Eimeria spp. and enterotoxigenic B. fragilis were only studied by qPCR in 542 and 349 out of 757 total clinical cases, respectively, as those two latter qPCR tests were included in September 2018 for Eimeria spp. and January 2019 for B. fragilis in our routine diagnosis service.
The number of clinical cases in which pathogens were analyzed are presented in an age distributed format in Table 1.
On the other hand 78 EPEC (n = 40) and non-EPEC (n = 38) E. coli isolates obtained by bacteriological culture in this study were selected for the investigation of other colonization factors such as adhesive factor/rabbit 2 (afr2), rabbit EPEC adherence locus (ral), linfocite inhibitory factor (liftA), and the porcine attaching and effacing-associated (paa) gene.

Bacteriological culture was carried out individually for each sample. Mucosal digestive samples were obtained by scrapping with cotton swabs, and these were streaked on Columbia blood, McConckey, XLD, and Slanetz and Bartley agar plates (OXOID) and grown at 37 °C under aerobic conditions for 24–48 h. MALDI Biotyper (Bruker Daltonics GmbH, Bremen, Germany) was used to identify bacterial isolates.

For every single case, up to 5 samples were pooled for acid nucleic acid extraction to make only one determination per case and pathogen. The content of swabs used for bacteriological culture was afterwards removed in 700 µL of PBS solution through rotation movement and vortex usage. After that, total nucleic acids were extracted from 200 µL of that suspension using an automatic device (KingFisher Flex System, Thermo Fisher Scientific, Waltham, MA, USA) and the respective commercial kit (MagMAX™ CORE Nucleic Acid Purification Kit, Thermo Fisher Scientific Waltham, MA, USA), following the manufacturer’s instructions.

The DNA from E. coli colonies were extracted with a simple thermal shock. The colonies were put in 1 mL of distilled water and boiled for 10 min in a water bath. After that, the tube was centrifuged for 5 min at 15,600× g, and the eluted DNA was transferred to a new tube.

Results obtained by qPCR for each of the studied pathogens (C. perfringens, C. spiroforme, EPEC, rotavirus A, Eimeria spp., and enterotoxigenic B. fragilis) distributed by age groups are shown in Figure 1.
Regarding microbiological cultures (data not shown), E. coli was the most frequently isolated bacteria, but as EPEC positive cases were identified by the eae gene-specific qPCR test directly performed on mucosal samples, results of E. coli isolation by culture were not taken into account. Only cases with other bacterial species considered to be isolated rabbit pathogens were recorded. Salmonella spp. and E. hirae were the only pathogens detected by aerobic culture (Table 3). Other bacterial species isolated during this study were Bacillus spp., Proteus spp., Staphylococcus spp., Enterobacter spp., Enterococcus faecalis, E. faecium, Pseudomonas spp. Acinetobacter spp., and Alcaligenes spp., but all of them are considered commensal microorganisms of the digestive tract of rabbits.
Figure 2 shows the Venn diagrams representing the principal coinfections found between the cases analyzed by qPCR. Figure 3 shows the proportions of positive and negative cases compared to the total cases analyzed for each of the eight pathogens identified in this study.
The virulence attributes of the 78 E. coli isolates studied in this work are listed in Table 4. Non-EPEC isolates (n = 38) were also negative for the other colonization factors investigated, whereas all of the EPEC isolates (n = 40) were also positive at least to one other colonization factor. Different virulence profiles have been found among EPEC isolates, but the more common one was that positive to liftA, ral, and paa (n = 28), while isolates positive for afr2 were scarce (n = 6).

Our study provides an overview of the etiological agents present in rabbit enteric diseases in the Iberian Peninsula during 2018–2019. From the high number of samples included in the study, we conclude that colibacillosis by EPEC is very important in young rabbits (<15 days old) as a single infectious disease; meanwhile, the older the rabbits are, the more complex the digestive diseases become. In preweaning animals EPEC remains as an important pathogen, but other pathogens grow in importance, for example, C. spiroforme and enterotoxigenic B. fragilis are usual co-infections with EPEC and C. spiroforme and, less frequently, with Eimeria spp. Concerning growing rabbits, we cannot find any preeminent pathogen over the rest, finding a large variety of coinfections among C. spiroforme, Eimeria spp., EPEC, and Rotavirus A and thus showing a much more complex scenario where a single cause for the disease cannot be attributed. 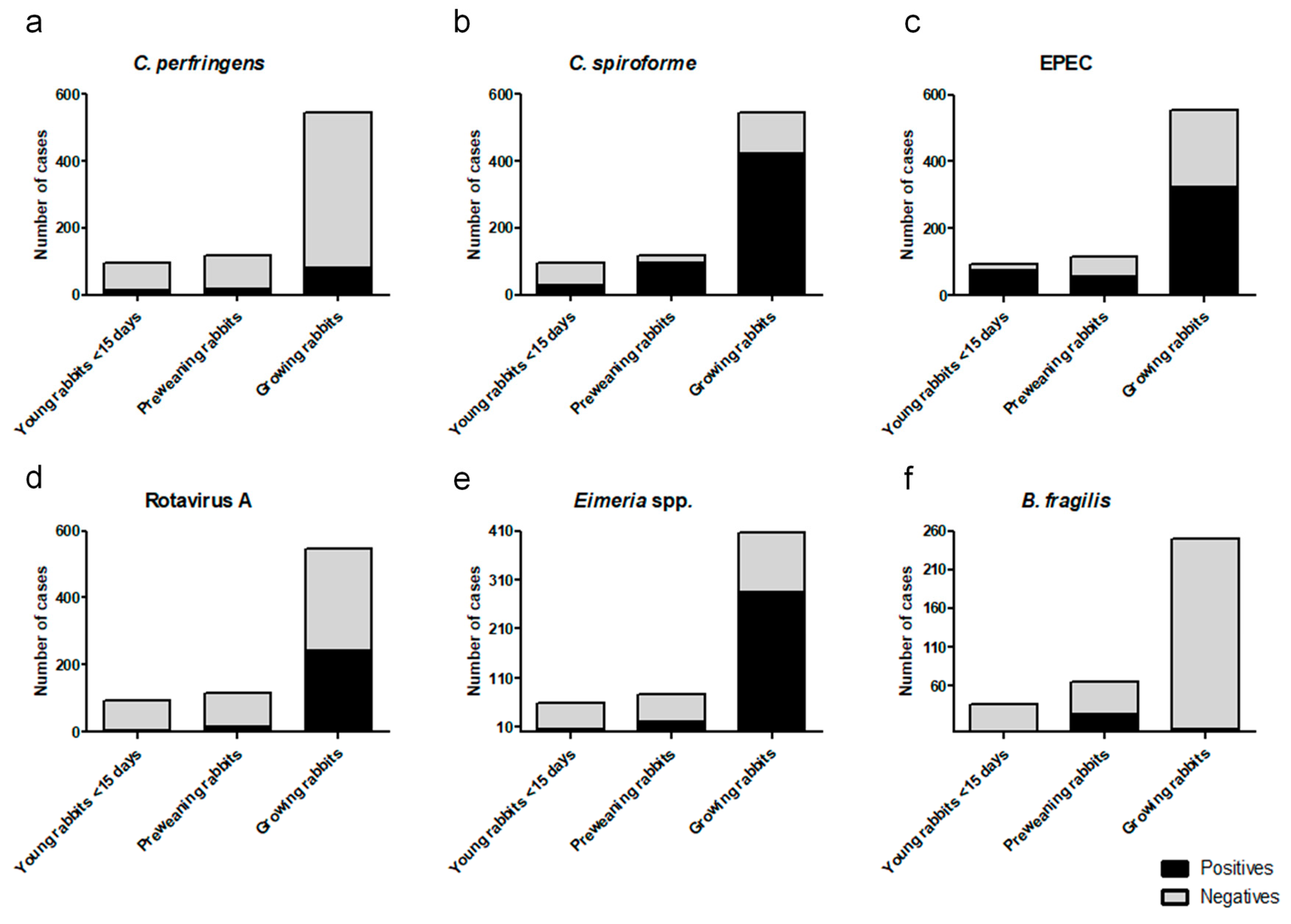 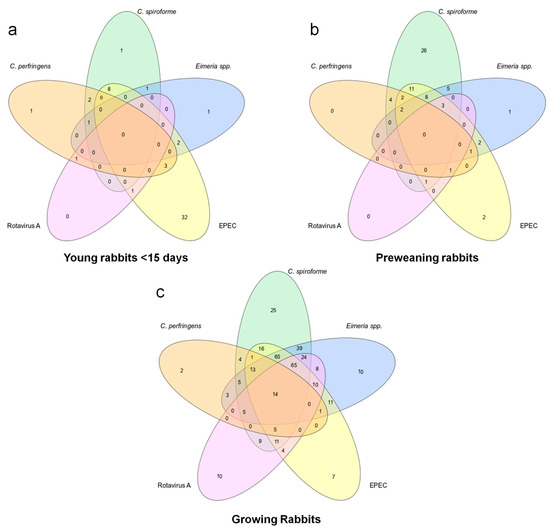 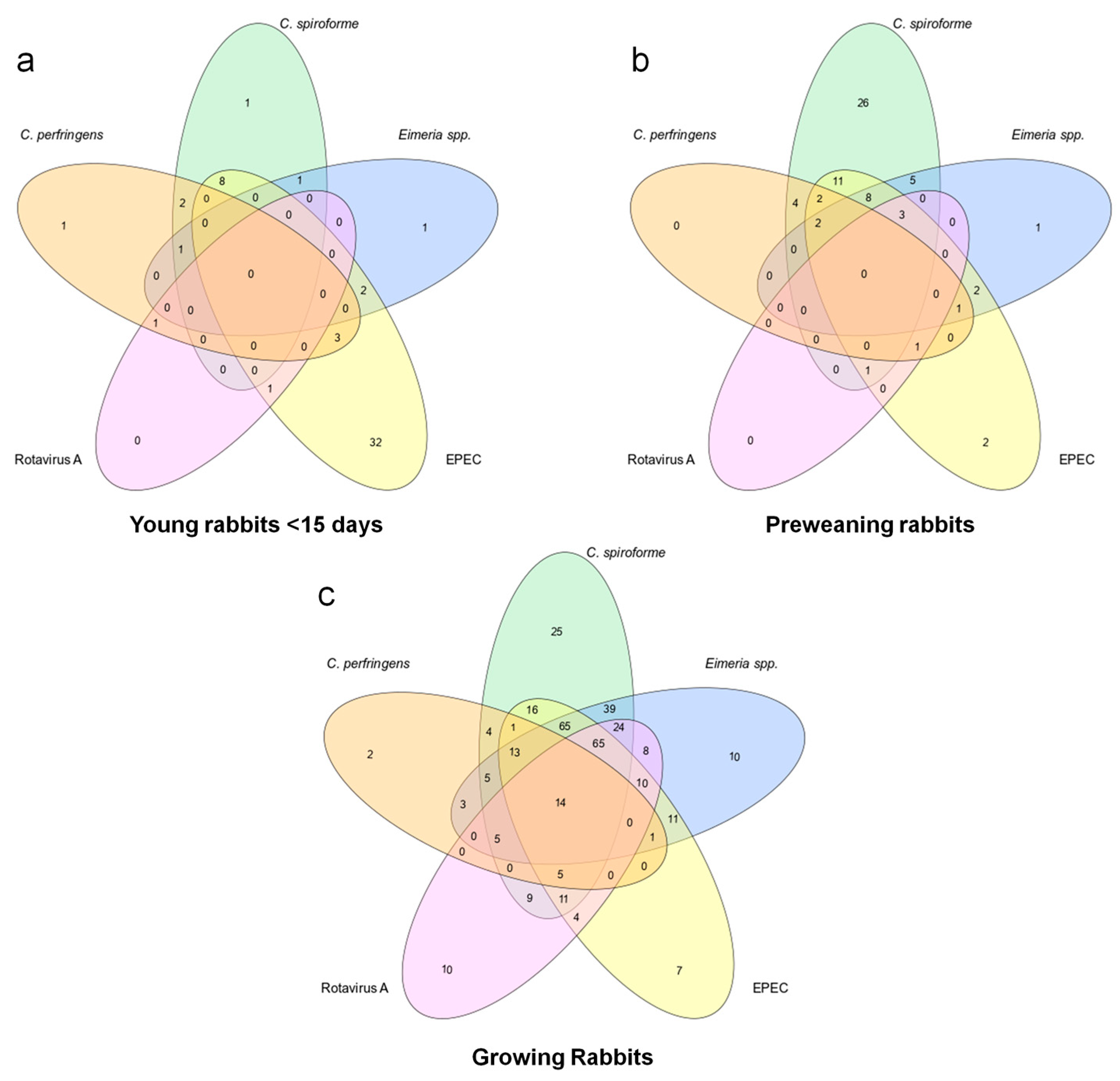 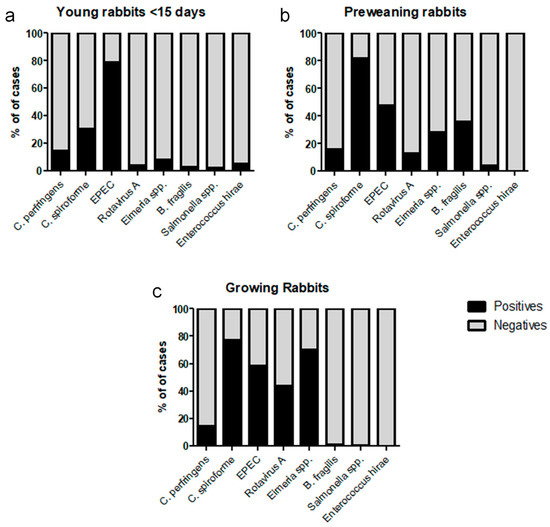 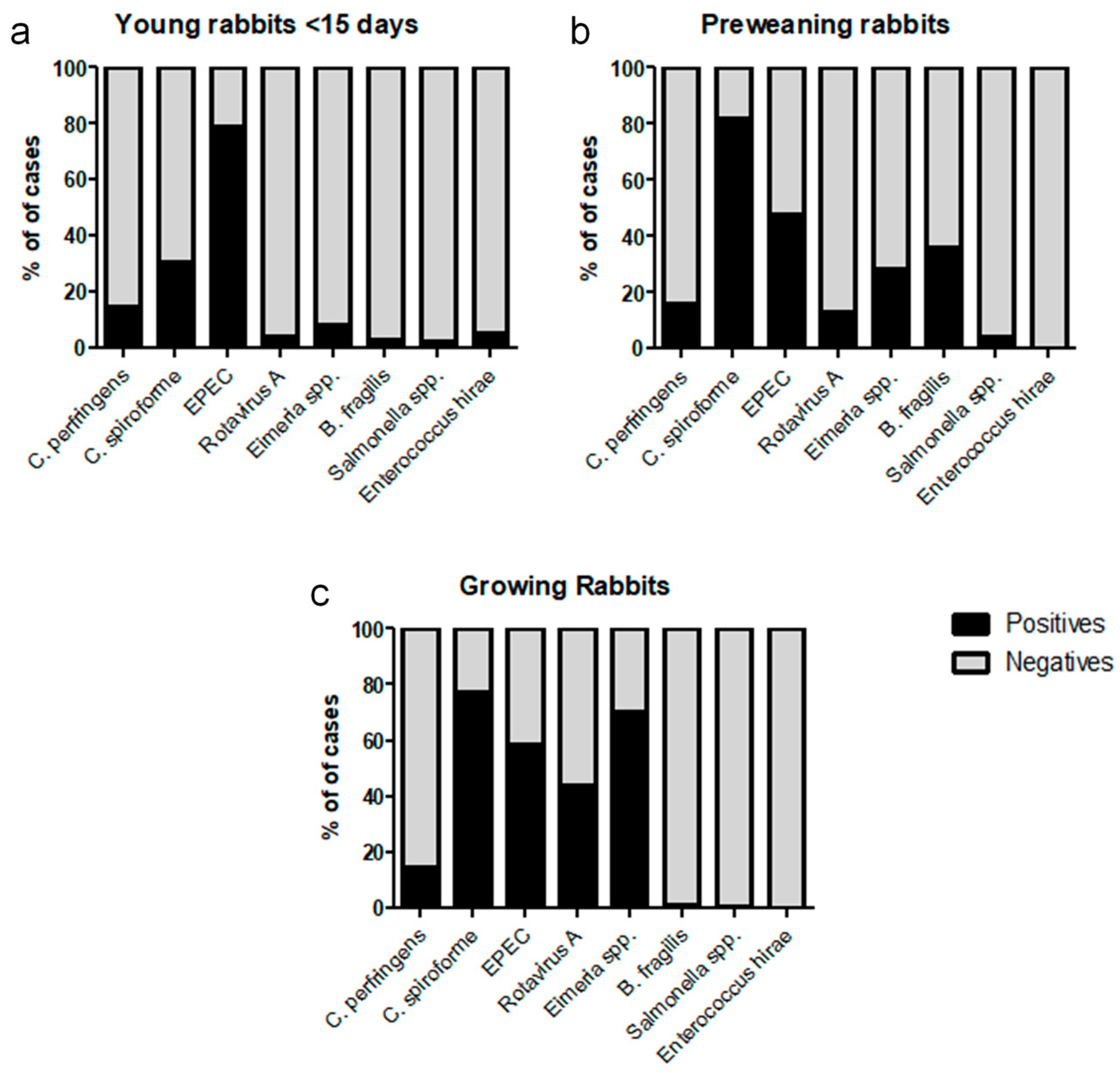