ClassifyMe: A Field-Scouting Software for the Identification of Wildlife in Camera Trap Images
Previous Article in Journal

How congeneric species with similar realized niches manage to coexist is a central question in the study of biodiversity. Here, we examined the daily activity rhythm of two coexisting serow species in a mid-mountain humid evergreen broadleaf forest. We used camera traps in a five-year survey at Mt. Gaoligong, western Yunnan, China. We compared the daily activity rhythm of the rare red serow (Capricornis rubidus), a medium-sized solitary ungulate, with the coexisting Chinese serow (C. milneedwardsii milneedwardsii). Although their overall daily activity rhythms were similar, the rare red serow tended to range, feed, and stay vigilant from afternoon through midnight throughout the year. By contrast, Chinese serows preferred to be active from sunrise to noon in the wet season, but shifted their activities and behaviors to afternoon and midnight in the dry season. Interestingly, we found red serows sometimes ranging together with Chinese serows. When they encountered each other, red serows altered their activity patterns more notably, while Chinese serows significantly increased their activity level. These findings are understandable given their similar resource requirements. Although exploitative competitors, red and Chinese serow coexist by avoiding interference competition by altering their respective activity patterns in time. 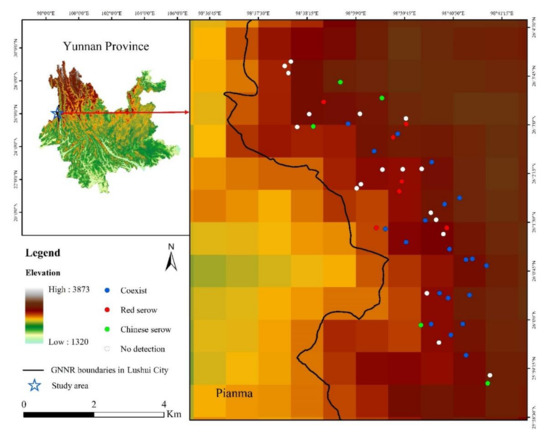