Sett Use, Density and Breeding Phenology of Badgers in Mediterranean Agro-Sylvo-Pastoral Systems
Previous Article in Journal

Figure 1 shows an example of a typical image of a canine nose pattern. The boxed middle area, called the Region of Interest (ROI), is enlarged and illustrated as an outline sketch. As can be seen here, the canine nose has a complex interlocking pattern of obtruded regions, called beads, and the sunken narrow ribbon-like regions between the beads, called grooves. This complex interlocking pattern of beads and grooves is a biometric marker that is unique to each individual animal.
The canine nose pattern is comparable to the human fingerprint in its biological origin. First, human fingerprints are essentially collections of connected friction ridges, which are raised portions of the epidermis on the digits, of ectodermal embryological origin. These epidermal friction ridges are the result of the interface between the cornified layer of the epidermis and the pattern of the underlying dermal papillae that project upwards into the epidermis. Although no exact mechanism of ridge formation has been proven to date, the general theory hypothesizes a connection between the basal layer of the epidermis and the dermis during early embryonic development. The basal layer of the epidermis, which is adjacent to the dermis, consists of columnar cells perpendicular to the skin surface. When the basal layer becomes undulated during the tenth to thirteenth week in embryonic development, so do the columnar cells, indenting folds into the dermis. These folds become the primary ridges and give way to the eventual irregular line of attachment between the dermis and epidermis at the basis of friction ridges throughout [29].
Similarly, the distinct nose patterns on certain mammals are of ectodermal embryological origin and determined by genetic and environmental factors in utero. The nasal plane (planum nasale) exhibits plaque-like patterns which, like the friction ridges on fingertips, are caused by the underlying interface between the dermal papillae and the interpapillary pegs of the epidermis. For example, the dermis of the canine planum nasale consists of a deeper reticular layer and a papillary layer, upon which rests the thin epidermis with a thin cornified layer (stratum corneum) at the most exterior, which presents a polygonal pattern that is characteristic of each individual [20]. While there are certain structural disparities in the nasal epidermis between different species—for instance, the bovine nose is glandular while the canine is not—the interdigitation of dermal papillae with epidermal projections is a consistent feature in those with visible surface patterning of the nose [30].

As explained in the Introduction, the two goals of this study are to examine: (1) if the canine nose pattern is fully formed at the second mensiversary; (2) if this nose pattern stays invariant throughout a dog’s life and could be used as a biometric marker. To achieve this goal, we have collected data by following the procedure below. This study was conducted at Konkuk University according to the guidelines of the Institutional Animal Care and Use Committee, and was approved by Konkuk University’s Animal Experiment Ethics Committee under the approval number KU 19203.
The choice of the second mensiversary as the start date was to examine Goal (1). This experiment ends at the eleventh mensiversary, because it is around that time a puppy enters into the adult stage of its life, from which point the stability of biological traits largely prevails for the remainder of its life, hence achieving Goal (2).
The nose images of each puppy taken at each mensiversary are shown in Figure A1 in Appendix A. Two images are missing because the new owners who adopted the two puppies around the third mensiversary could not bring them in for image-taking on the appointed day.

The formation of the nose pattern at the second mensiversary and its invariance in the subsequent months can be checked in two ways: by direct visual examination and by algorithmic verification.

In this paper, the nose images of ten beagle dogs were collected for the ten month period starting from the second mensiversary and ending at the eleventh mensiversary. Then the nose patterns of these images are examined visually and by a biometric algorithm. It is found that the canine nose patterns of these beagle dogs are fully formed at the second mensiversary and remains invariant until the eleventh mensiversary.
It should be noted that these puppies are siblings (six from one dam, the other four from another dam). Even so, our finding is that the nose patterns of genetically related dogs are clearly distinct, which is again a very strong evidence that the nose pattern is indeed unique to each individual dog. This result confirms and enhances the claims of earlier works by others [17,18,19,20] that the canine nose pattern is indeed unique to each animal. As a conclusion, our findings and those of others together imply that (1) the canine nose pattern is fully formed at the second mensiversary; and (2) this nose pattern stays invariant throughout a dog’s life to be used as a biometric marker.
Due to time limitations, we could not perform a longer-duration study. Therefore, the conclusion that the canine nose pattern remains invariant throughout a dog’s life is based on the understanding that biological traits remain stable from the early adult life until death. However, this is still a postulate which should be verified by a longer-duration study in the future.
The time period of this study starts at the second mensiversary for the specific purposes described in this paper. However, this is still a very interesting research topic to determine to the minute details, such as the earliest time at which the nose pattern is fully formed. We speculate that this timepoint is around the first mensiversary.
Finally, the primary concern of this paper is to study the intrinsic biological nature of nose pattern formation and invariance. When it comes to applying it for actual use in everyday life as a biometrical tool, there are many issues that have to be addressed separately. The most important is how to handle not-so-good images that occur in practice due to problems with camera focusing and the rapid movement tendencies of dogs. It is also important to make a nose-image-capturing device as user-friendly as possible. We hope to be able to return to these practical issues in our subsequent papers.

The data collection and the DNA testing were conducted at Konkuk University according to the guidelines of the Institutional Animal Care and Use Committee, and were approved by Konkuk University’s Animal Experiment Ethics Committee under the approval number KU 19203.

All data used in the paper are displayed as images in Figure A1 in Appendix A. Higher resolution images may be available for the purpose of academic study. Contact the corresponding author, Song-Hwa Kwon, at [email protected] for more details. 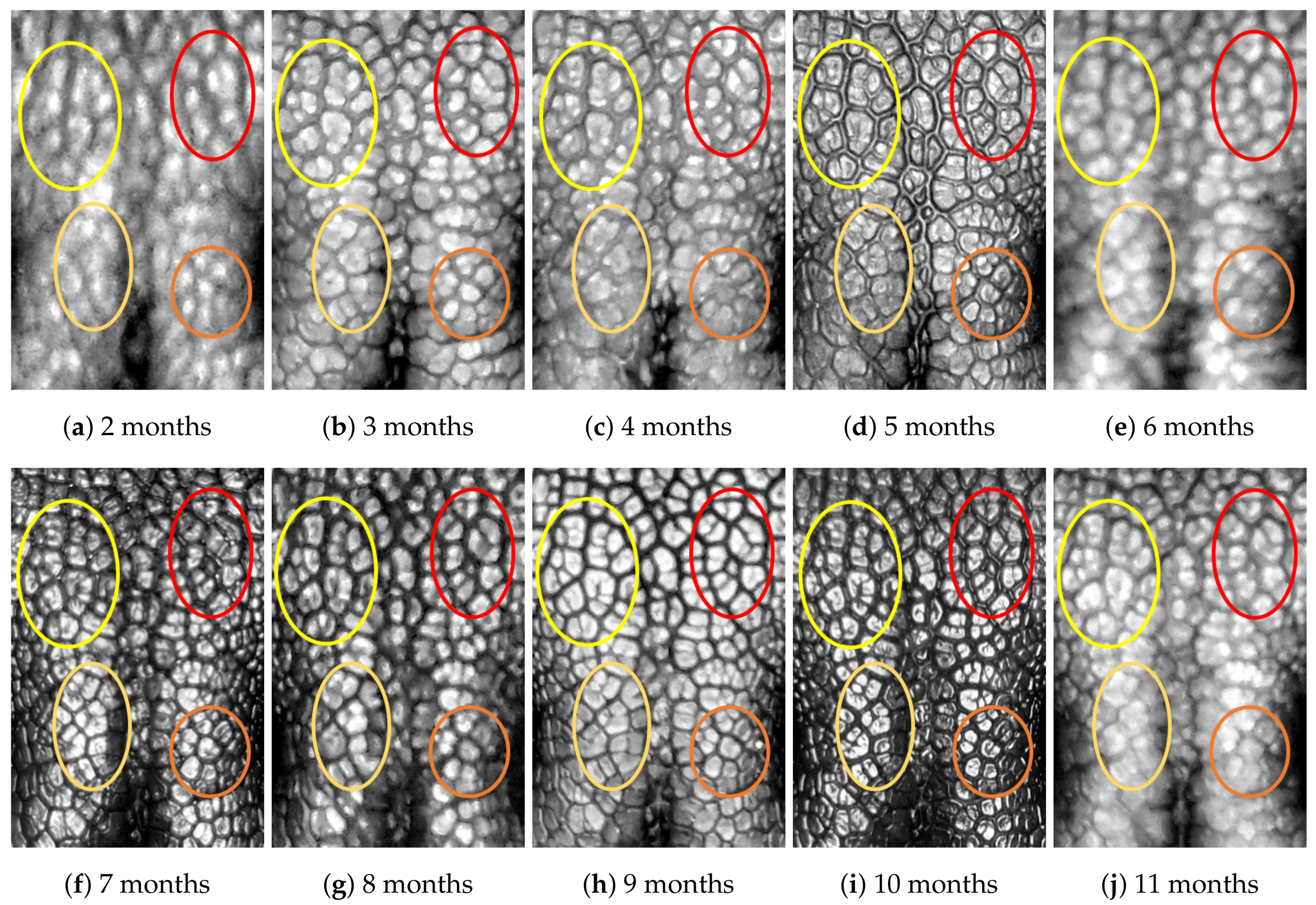 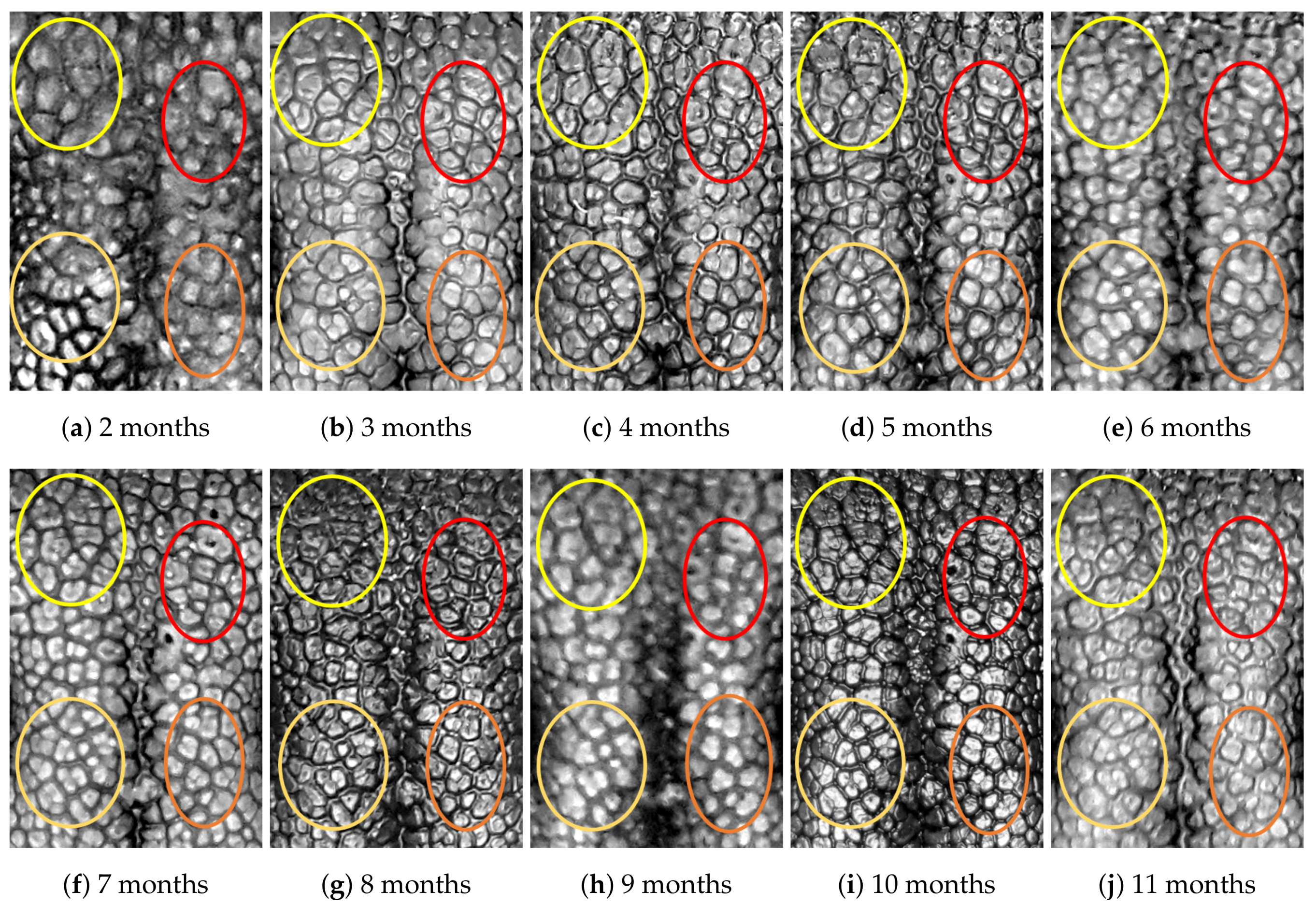 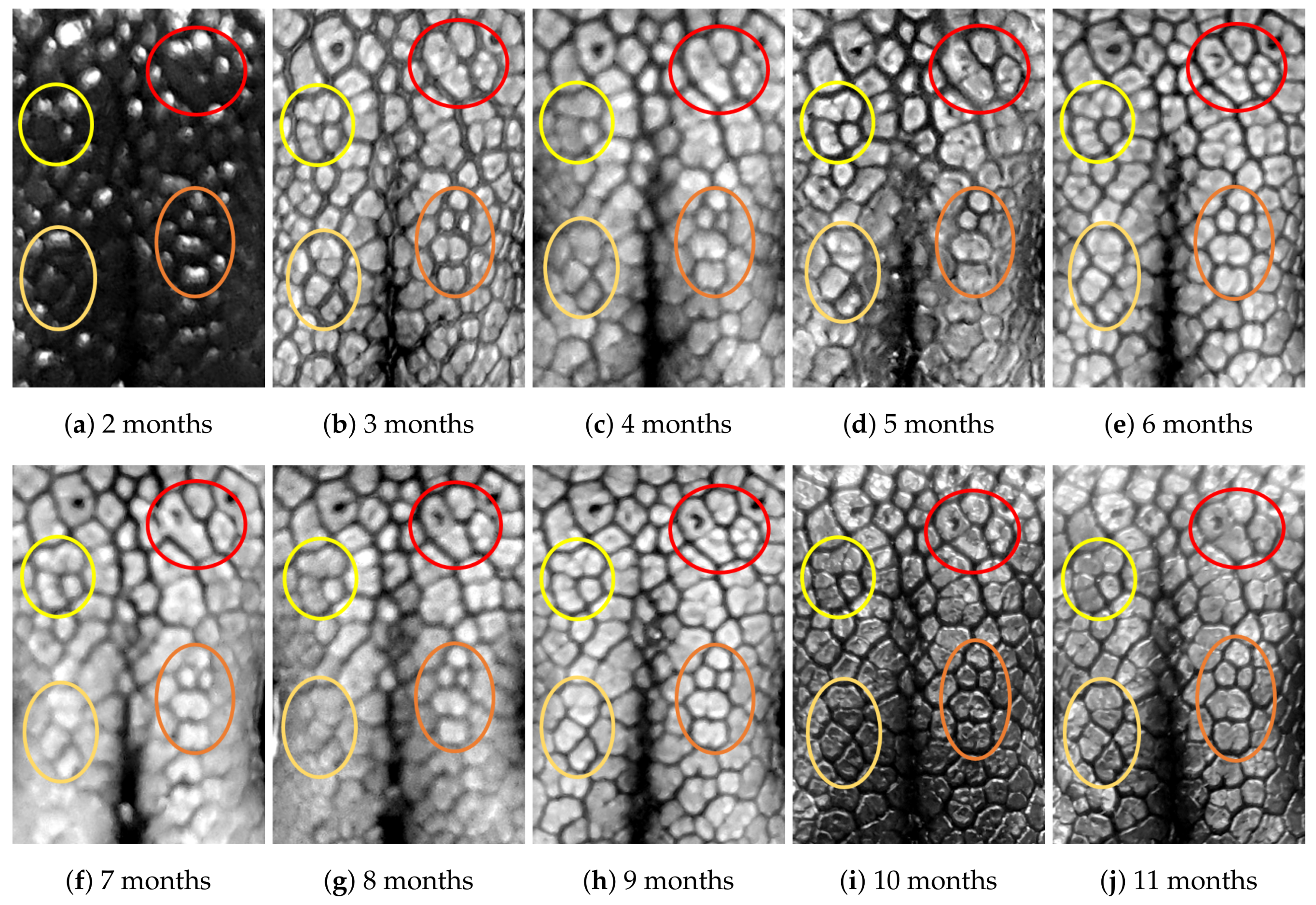 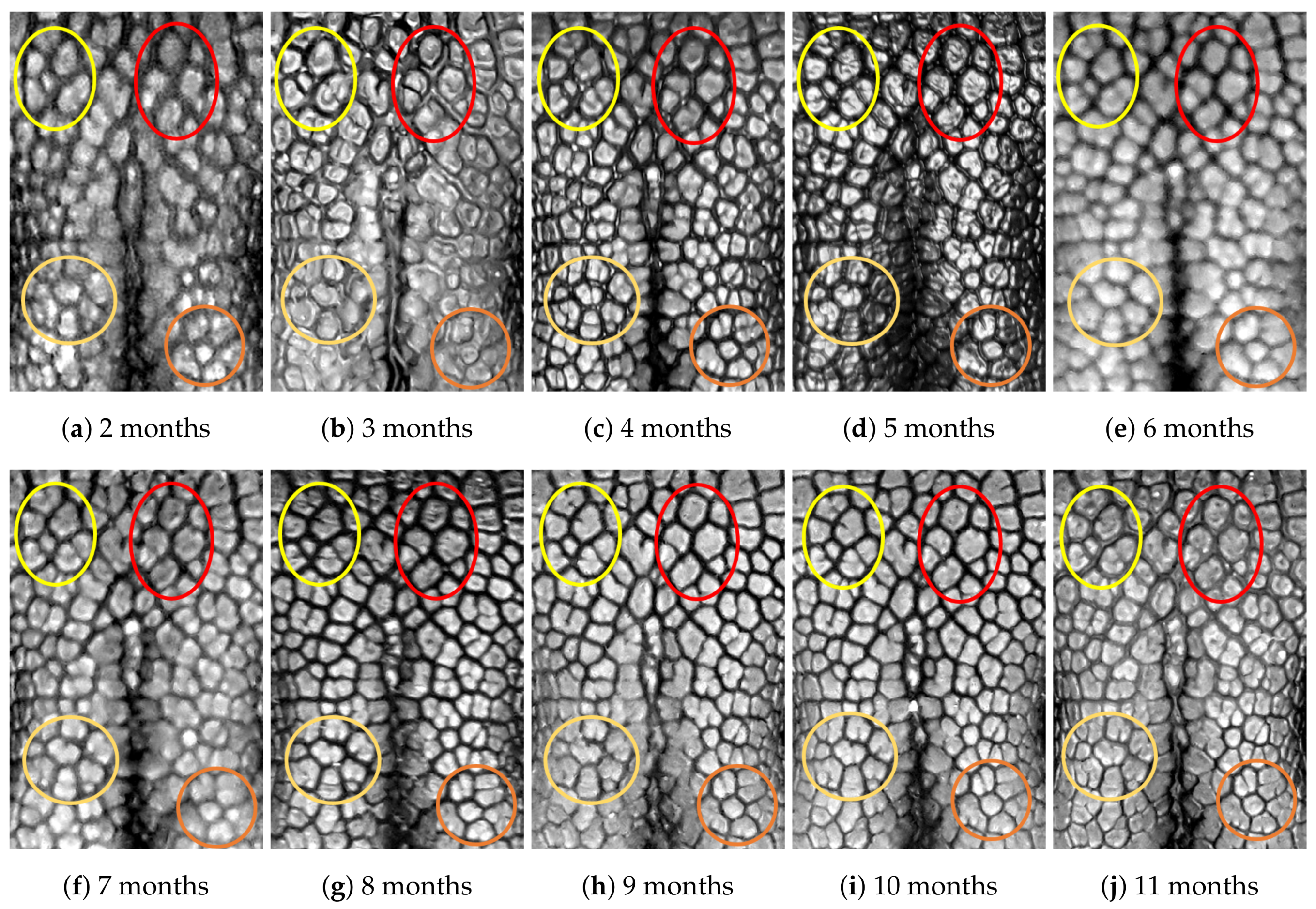 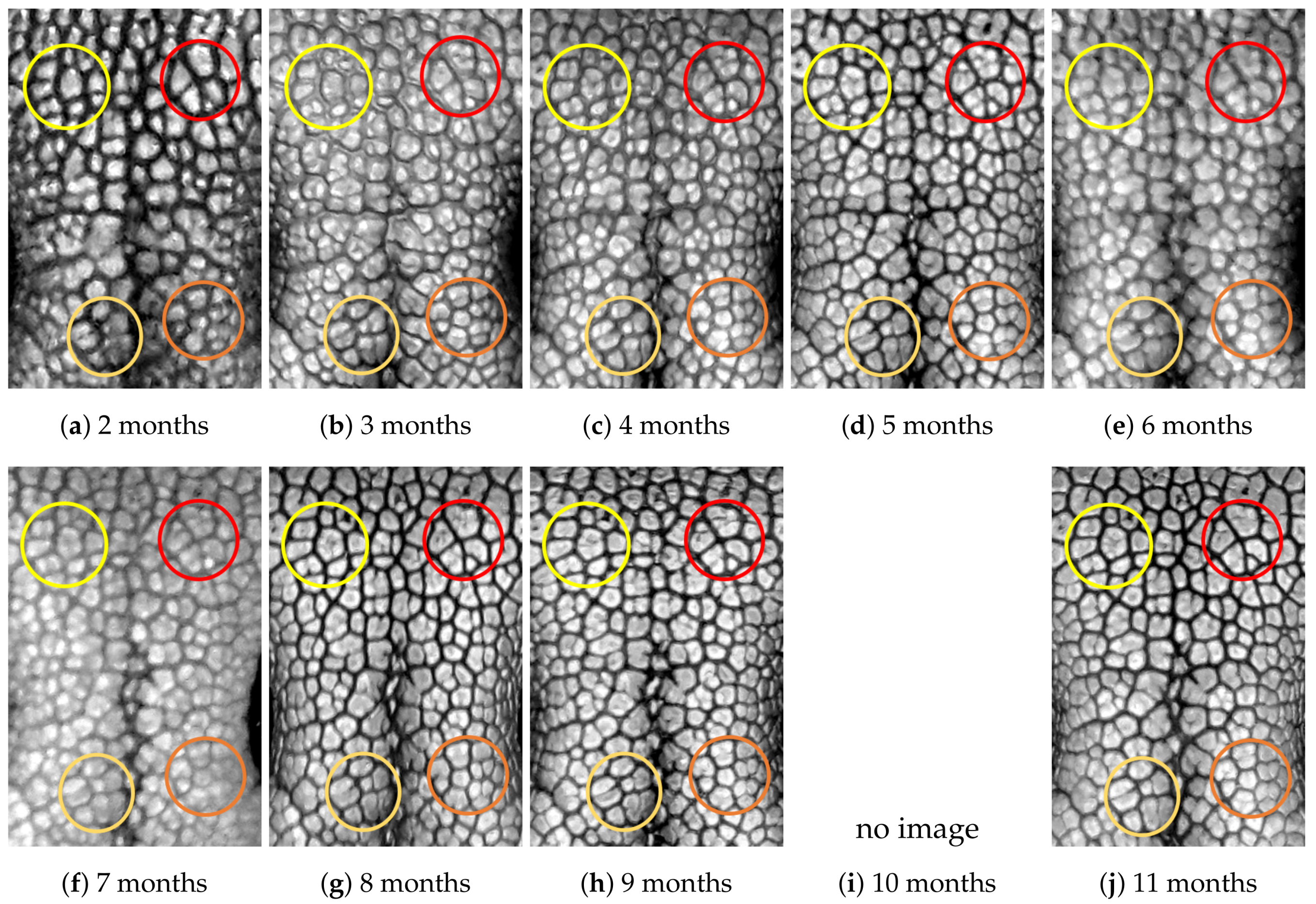 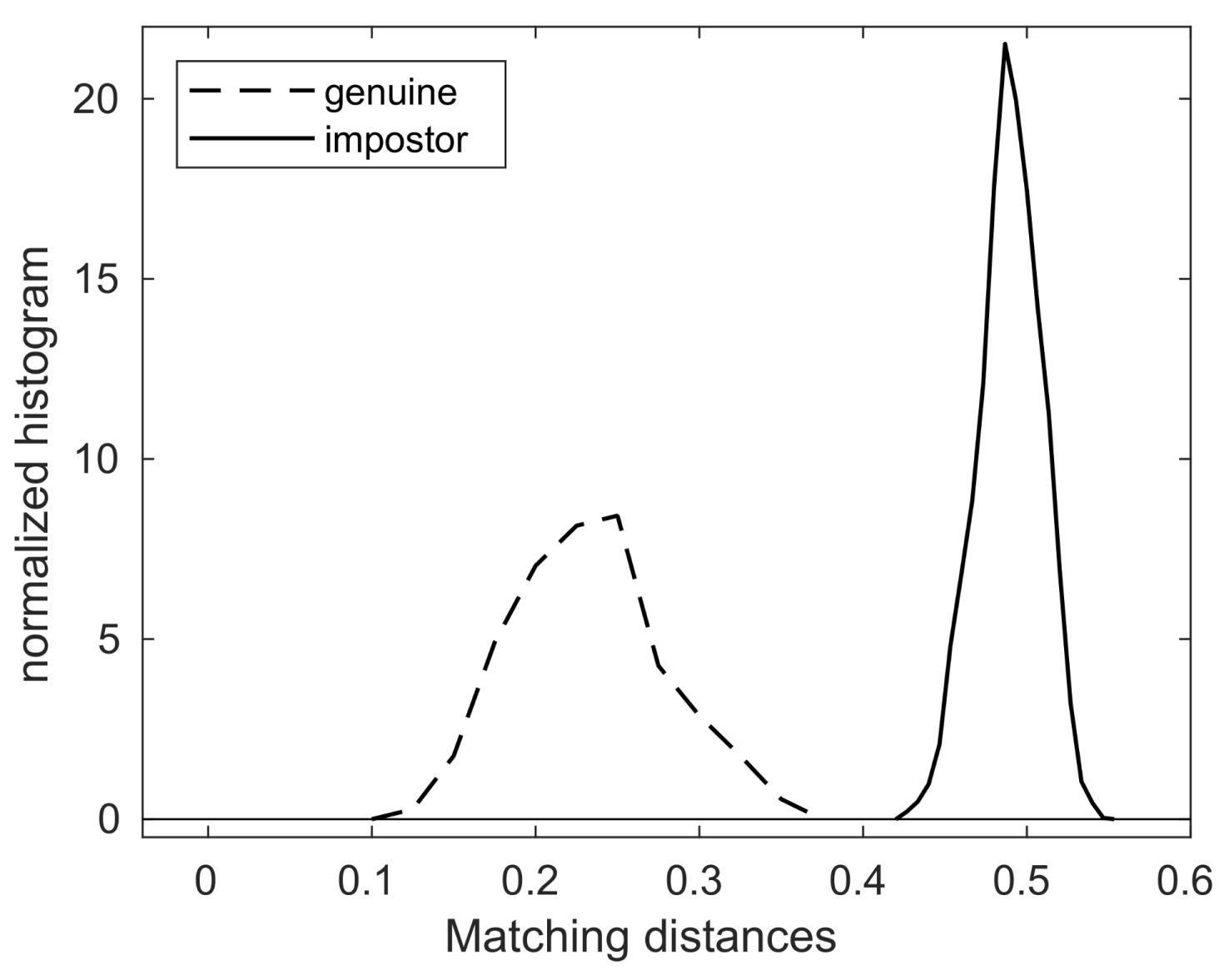