Sett Use, Density and Breeding Phenology of Badgers in Mediterranean Agro-Sylvo-Pastoral Systems

Understanding carnivores social structure variation is pivotal for properly addressing conservation challenges and solutions. The European badgers is a social carnivore for which most of the available information regarding how this species is socially organized derives from central west populations. This article describes the group composition, den use patterns and breeding phenology of a Mediterranean population of badgers. We showed that badger live in low density, in relatively small groups, composed by 2–4 adult animals and ca. 2 cubs, born in winter. These patterns, representing a variation of what was described for other populations, show that badgers take advantage of the landscape context, where human-related resources and mild environmental conditions allow badger to reach higher densities than in many southern populations, and to reproduce earlier than their northern counterparts.

Carnivores social organization varies widely, from strongly social to solitary predators. European badgers are facultative social carnivores that also shows a geographical variation in social structure. These patterns derive mainly from central/west European regions, with an under-representation of Mediterranean populations that face different conservation challenges, especially regarding group composition, sett use patterns and breeding phenology. We addressed these traits topics for a population inhabiting a Portuguese agro-silvo-pastoral system. Based on monthly monitoring of 34 setts and continuous camera-trapping surveys of 12, we showed that setts surrounded by diversified vegetation and located in sandy sites are more used, a pattern probably linked to food availability and ease of sett excavation and maintenance, respectively. Badgers followed a general pattern regarding group size (2–4 adults), but showed an intermediate population density (0.49–0.73 badgers/km2), with values higher than those estimated for other Mediterranean environments, but lower than for central-western populations. This, together with the breeding (November/January) and cub emergence (1.8 cubs/sett; March/April) periods, indicates an ecological adaptation to the landscape context, where human-related resources and mild environmental conditions allow badger to reach higher densities than in many southern populations, and to reproduce earlier than their northern counterparts. View Full-Text
Keywords: camera-trapping; Meles meles; density; social organization; reproduction camera-trapping; Meles meles; density; social organization; reproduction
►▼ Show Figures 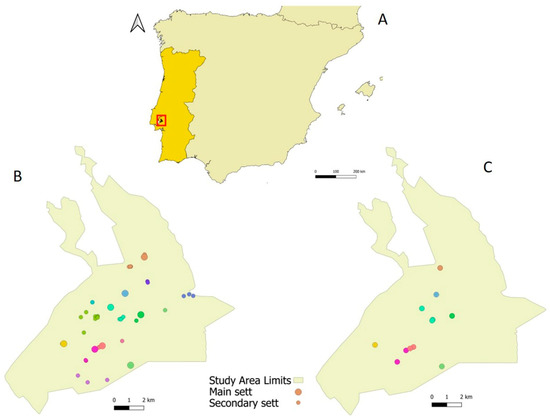