Production and Health Management from Grazing to Confinement Systems of Largest Dairy Bovine Farms in Azores: A Farmers’ Perspective
Previous Article in Journal

In cow-calf operations, replacement heifers are bred to calve at 2 years of age or older. However, as beef production has become more intensive during the last 20 years, an increasing number of farmers have lowered the age at first service. Numerous studies have focused on determining the optimum reproductive development of beef heifers to ensure a maximum pregnancy rate. Maternal age during gestation has been suggested to be an important influence on the nutritional environment for the embryo and fetal growth. No studies have been conducted to determine the possible effects of heifer age at first gestation on fetal and postnatal growth and development. This study aimed to determine the effects of age at first gestation on offspring growth performance, glucose metabolism and insulin-like growth factor 1 concentration from birth to weaning of calves from adult cows and heifers at 15 or 27 months of service. First-breed heifers produce lighter progeny at birth than mature cows, and calves from younger heifers were lighter at weaning than calves from older heifers. Milk production was similar between heifers and lower than that from adult cows. Age at first gestation may affect offspring postnatal growth performance, glucose metabolism and IGF1 concentration.

Traditionally, in Argentinian cow-calf operations, replacement heifers are bred to calve at greater than 2 years of age. However, as beef production has become more intensive during the last 20 years, an increasing number of farmers have lowered the age at first service (15 to 18 months). International literature has focused on management strategies to obtain puberty at early ages [1,2]. It has been demonstrated in numerous studies that the level of nutrition influences age and bodyweight (BW) at puberty. These studies suggest that heifers need to attain, at least, 55% to 60% of their mature BW to ensure a maximum pregnancy rate [3,4]. Nevertheless, no studies have been conducted in order to determine the possible effects of heifer age at first gestation on fetal and postnatal growth and development. Maternal age during gestation has been suggested to be an important influence on the nutritional environment for the embryo and fetal growth [5,6]. The birth and weaning BW of heifer progeny are generally 10 and 12% lower, respectively, compared to progeny from mature cows [7]. Nutrient availability during fetal development may play a role in altered glucose–insulin homeostasis during early postnatal growth and development in cattle. LeMaster et al. [8] reported that late gestation nutrient restriction reduced birth weight and postnatal glucose concentrations compared to control cows. Insulin–like growth factor I (IGF1) is essential for regulation of animal growth, and nutritional restriction that affects fetal development may result in permanent alterations of the IGF axis [9,10]. Maternal nutrient restriction in mid to late gestation resulted in altered circulating levels of IGF1 in offspring [11,12]. Thus, it is highly possible that the age at first breed in beef heifers will alter fetal and postnatal growth due to differences in energy partitioning in the dam. The objective of this study was to determine the impact of maternal age at first gestation on fetal growth, lactation performance, calf growth, glucose metabolism and IGF1 concentration.

The experimental study was conducted at the Experimental Station of Cuenca del Salado INTA (Buenos Aires, Argentina). All procedures involving animal handling were approved by CICUAE INTA-CERBAS (Institutional Committee for Care and Use of Experimental Animal of South Buenos Aires Region), approval No. 161. The experiment was a complete randomized design. A total of 20 pregnant heifers at 15 months of age ± 5 days (15 M), 20 pregnant heifers at 27 months of age ± 4 days (27 M), and 20 pregnant multiparous cows (between 4 and 7 years old, adults) were selected randomly from the pregnant females at first insemination in an experimental herd for the present study. Heifers and multiparous Angus cows were fixed-time artificially inseminated (TAI) after a 7 day progesterone device (Cronipres®, Biogénesis-Bago, Argentina) and estrogen synchronization protocol using frozen thawed semen from a single Angus sire. At 30 days after TAI, pregnant dams were identified by transrectal ultrasound (Aquila pro, Esaote Europe B.V. Maastricht, NL; 5-MHz probe). Body condition score (BCS 1 = emaciated to 9 = obese; [13]) was assigned by a single trained technician throughout the experiment. Maternal BW and BCS were recorded on the first day of the trial (day 107), at parturition (day 0), and at weaning (day 236). Heifers and cows from the three age treatments were managed during gestation in a single group on oat pasture (IVDMD 628 g/kg; CP 159 g/kg). After calving, all cows and calves were managed in a single group on improved pastures (IVDMD 510 g/kg; CP 107 g/kg), until weaning at 236 ± 10 days of age.

Milk yield was measured by using a single-cow portable milking machine according to Quintans et al. [14] protocol, and milk production was estimated following Restle et al. [15] equation for a 24 h period. Briefly, calves were separated from their mothers at midday and were fitted with nose rings (San Miguel, Bahia Blanca, Argentina). Each cow was injected intramuscularly with a dose of oxytocin (10 IU Over®, Argentina) to facilitate milk letdown. After 5 min, dams were milked and placed back in the same paddock with their calves. The following morning, at approximately 0700 h, dams were milked again and milk yield was recorded with a milk meter (TrueTest, Auckland, New Zealand). A 10 mL sample of milk from every dam was taken for determination of protein, fat, lactose and total solids (IDF 141C:2000 Bentley Instruments, Chaska, MN), and urea (Chemspec 150, Bentley Instruments) analysis. Milk yield records and milk samples were taken at four different times: 32, 97, 151, and 236 days after parturition (±10 days).

Calf sex and BW were recorded with an electronic scale, in the first hours after calving and at weaning (day 236). The morphometric measurements recorded were: cannon bone circumference (narrowest point of metacarpus), heart girth (posterior to foreleg), height (linear distance from the floor to trochanter major of the femur), body length (linear distance along the vertebral column from the first coccygeal vertebra to the occipital bone) and head circumference (measurement collected around mandible and parietal bone just posterior to eye orbits). The ratio of newborn measurement and body weight at birth was calculated to determine if fetal growth is affected asymmetrically. To calculate the body mass index, BW at birth was divided by the square root of body length [16].

Calves´ blood samples were taken from jugular vein at birth, 55, 98, 153, and 236 days. Samples were taken at the same time in the day after 16 h fasting and no water supply, preserved in ice for 3 h, centrifuged (2500× g, 15 min) for serum collection and stored at −20 °C until laboratory analysis. Glucose level was measured using an electronic glucometer (Abbott©, Berkshire, UK) immediately after the blood sample was taken [17]. Insulin concentration was assessed in serum samples by radioimmunoassay technique (RIA) using anti-bovine insulin antibody (Sigma, St. Louis, MO, USA) and standard human insulin (Laboratorios Beta, Buenos Aires, Argentina); the minimum detectable concentration was 0.05 ng/mL. Intra- and inter-assay coefficients of variation were <7.8% and 10.3%, respectively. Serum IGF1 concentration was serum quantified in one assay via RIA after acid ethanol extraction [18] using IGF1 antibody (UB2-495) of the NIDDK. Intra-assay coefficient of variation was 7.6%, and the minimum detectable concentration was 2.4 ng/mL.

Numerous studies have been focused on determining the optimum reproductive development of beef heifers to ensure maximum pregnancy rates. However, offspring performance of first breed heifers has not been considered to define reproductive management strategies of replacement heifers. To the authors´ knowledge, this is the first study to determine the effects of dam age at first gestation on fetal and postnatal growth in beef cattle. It is clear that under conditions of extensive grazing in Argentinian cow-calf operations, first breed heifers produce lighter progeny at harvest than mature cows. Moreover, calves from 15 M heifers were lighter at weaning than calves from 27 M heifers. Differences observed in this study on postnatal growth performance, glucose metabolism and IGF1 concentration between 15 M and 27 M calves suggest that studies should be conducted in order to maximize not only the heifer pregnancy rate but also offspring performance. Considering the magnitude of calf harvests from first breed heifers in a typical cow-calf operation, more studies are needed to determine which mechanisms modify postnatal growth in the progeny and design nutritional strategies to minimize the differences in fetal and postnatal growth between the progeny of heifers and mature cows.

All procedures involving animal handling were approved by CICUAE INTA-CERBAS (Institutional Committee for Care and Use of Experimental Animal of South Buenos Aires Region), approval No. 161.

The data are available by contacting the corresponding author. 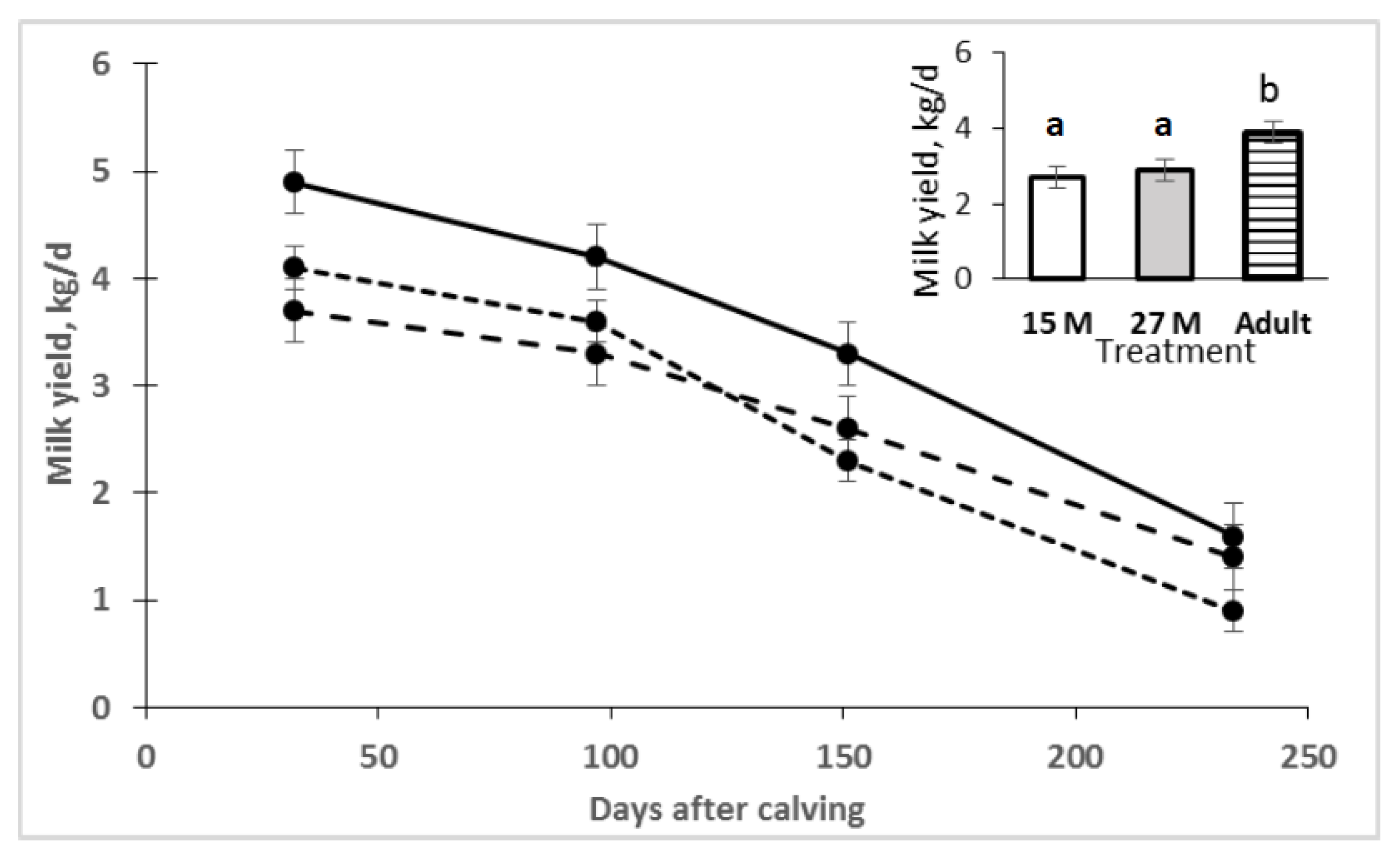 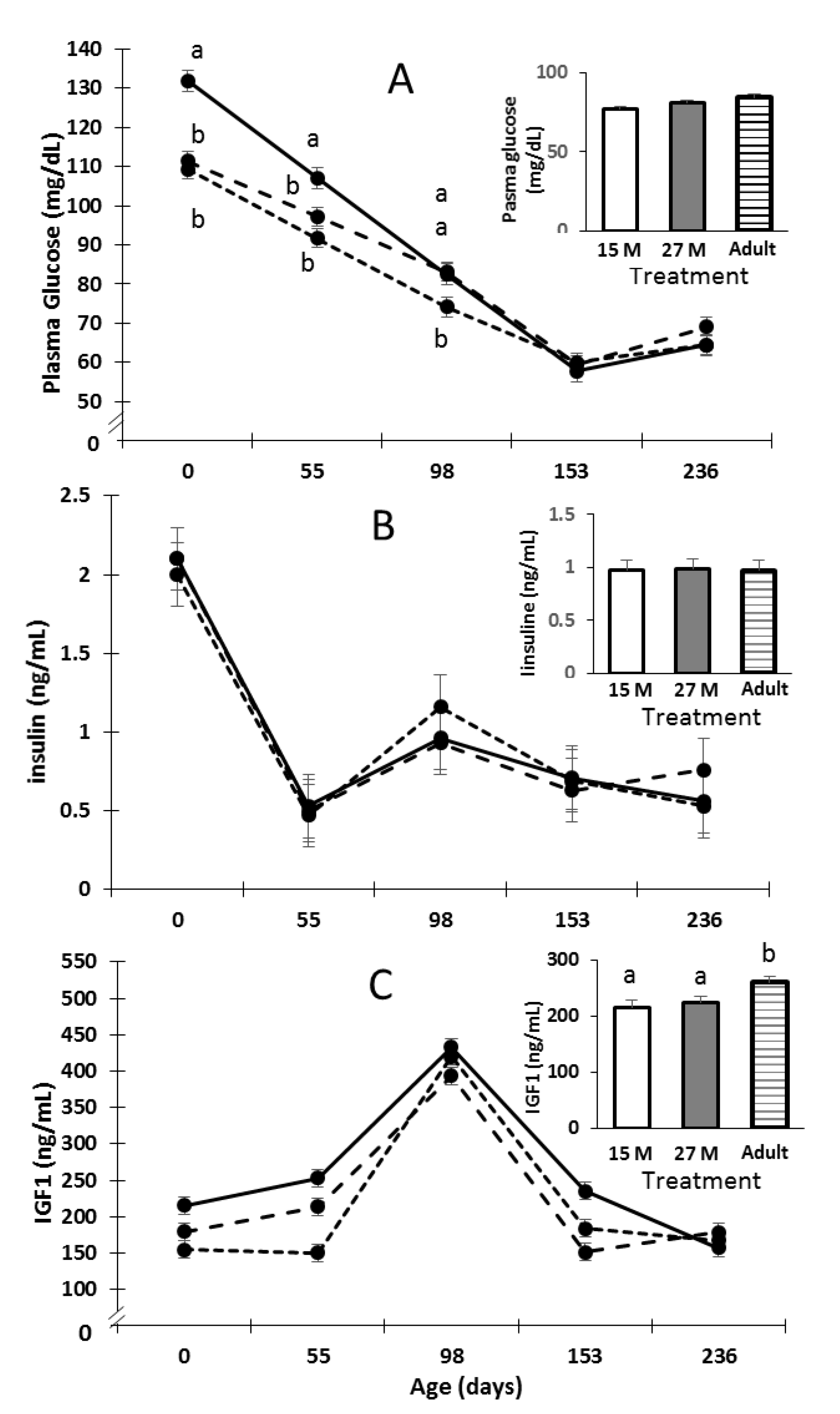