The Effect of Feeding Liquid or Dry Creep Feed on Growth Performance, Feed Disappearance, Enzyme Activity and Number of Eaters in Suckling Piglets

Fish meat is highly perishable due to its composition and the naturally present microbiota. The food industry aims to provide healthy, safe, and high-quality products to the market. Several strategies, including the use of natural preservatives, may be used to enhance food shelf life, and they can also be combined with others, such as vacuum packaging. This being the case, essential oils are natural plant components that, due to their composition, possess high antimicrobial and antioxidant effects, and are therefore good candidates to be tested as fish preservatives together with vacuum packaging. In the present study, essential oils from Citrus lemon and Cinnamomum camphora were added to rainbow trout meat for evaluating the microbiological quality (counts of bacteria and identification of present microbiota) of the fish when vacuum packed and stored for 7 days at 4 °C. Our results show that lemon (0.5% and 1%) as well as C. camphora essential oils (0.5% and 1%) had a positive effect on the microbiological quality of fish meat, keeping a high microbial quality of the fish fillets during 7 days of cold storage. The use of these essential oils in combination with vacuum packaging is beneficial in extending the shelf life of rainbow trout meat. All isolated species under the tested conditions are identified in the present study; such information will be useful for the future development of preservation methodologies that target isolated microorganisms, which will enable the food industry to enhance the shelf life and safety of fish.

The aim of the present study was to evaluate the microbiological quality of rainbow trout meat treated with essential oils (EOs from Citrus limon and Cinnamomum camphora) at concentrations of 0.5% and 1.0% in combination with vacuum packaging during storage. The composition of the EOs were analyzed by gas chromatography coupled with mass spectrometry, and total viable counts (TVCs), coliform bacteria (CB), and lactic acid bacteria (LAB) were determined on the zeroth, first, third, fifth, and seventh days of storage at 4 °C. Individual species of isolated microorganisms were identified using a MALDI-TOF MS Biotyper. The results show that the major components of the EOs were linalool (98.1%) in C. camphora and α-limonene in C. limon. The highest number of TVCs and CB were 4.49 log CFU/g and 2.65 log CFU/g in aerobically packed samples at the seventh day. The lowest TVCs were those of samples treated with 1% C. camphora EO. For CB the most effective treatment was 1% lemon EO. LAB were only detected in a few samples, and were never present in aerobically packed samples; the highest number of LAB was 1.39 log CFU/g in samples treated with 1% lemon EO at day seven. The most commonly isolated coliform bacteria were Hafnia alvei, Serratia fonticola, Serratia proteamaculans, Pantoea agglomerans, and Yersinia ruckeri. Lactobacillus sakei, Staphylococcus hominis, and Carnobacterium maltaromaticum were the most frequently isolated bacteria from lactic acid bacteria. In conclusion, C. camphora EO at a concentration of 1% showed the highest antimicrobial activity.
Keywords:
rainbow trout; Cinnamomum camphora; Citrus limon; total viable counts; coliform bacteria; lactic acid bacteria; mass spectrometry; MALDI-TOF

Chemical composition of essential oils: Chemical characterization of essential oil samples was determined by gas chromatography/mass spectrometry (GC/MS) and gas chromatography (GC-FID), according to method provided by Kluga et al. [8].
The individual volatile constituents of injected essential oil samples were identified based on their experimentally determined retention indices and by comparison with reference spectra (WileyNIST 05 databases). The percentages of the identified compounds (amounts higher than 0.1%) were derived from their GC peak areas.
Fish handling and packaging: The fish were caught in a reservoir in Hriňová, in central Slovakia. The fish were slaughtered and then transported to the laboratory at a temperature of 4 °C. Meat of rainbow trout (Oncorhynchus mykiss) (Hriňová, Slovakia) was cut into small pieces weighing 5 g under sterile conditions. Selected samples were treated with 0.5% and 1% lemon essential oil (Hanus, Nitra, Slovakia) and 0.5% and 1% C. camphora essential oil (Hanus, Nitra, Slovakia). Vacuum-packed samples were packed using a vacuum packaging machine (Concept, Choceň, Czech Republic). A total of 105 samples were prepared. Seven types of samples were prepared: (1) control group with air—fish packed into polyethylene bags and stored at 4 °C; (2) control group with vacuum packaging—vacuum-packed fish, stored at 4 °C; (3) control group with sunflower oil—vacuum-packed fish with sunflower oil, stored at 4 °C; (4) vacuum-packed fish treated with 0.5% lemon essential oil, stored at 4 °C; (5) vacuum-packed fish treated with 1% lemon essential oil, stored at 4 °C; (6) vacuum-packed fish treated with 0.5% C. camphora essential oil, stored at 4 °C; and (7) vacuum-packed fish treated with 1% C. camphora essential oil, stored at 4 °C.
Sampling and cultivation: A total of 105 samples were analyzed. Microbiological analyses were performed on the 0th, 1st, 3rd, 5th, and 7th day of storage. Samples of rainbow trout, weighing 5 g, were placed in Erlenmeyer flasks and 45 mL of 0.1% sterile saline solution were added to each Erlenmeyer flask. The prepared samples were placed in a shaker and homogenized. Plate Count Agar (PCA, Oxoid, Basingstoke, UK) was used for total viable counts (TVCs). Inoculated Petri dishes were incubated at 30 °C for 72 h. Violet Red Bile Lactose Agar (VRBL, Oxoid, Basingstoke, UK) was used for the cultivation of coliform bacteria (CB). Inoculated Petri dishes were incubated at 37 °C for 48 h. De Man, Rogosa and Sharpe agar (MRS, Oxoid, Basingstoke, UK) was used for the cultivation of lactic acid bacteria (LAB). Incubation was performed in an incubator under an atmosphere containing 5% CO2 at 37 °C for 48–72 h.
Identification of microorganisms with a MALDI-TOF MS Biotyper: A MALDI-TOF MS Biotyper mass spectrometer (Bruker, Daltonics, Bremen, Germany) was used to identify isolated microorganisms from samples. MALDI-TOF MS (matrix-assisted laser desorption/ionization–time-of-flight mass spectrometry) has the advantage of speed, low cost, and simplicity, and emerges as an attractive option for microbial typing. The analysis workflow used for typing by MALDI-TOF MS is the same as for bacterial identification, and includes the culturing and preparation of samples, protein extraction with ethanol–formic acid, spectrum acquisition, and data analysis.
Preparation of MALDI matrix solution: The stock solution consisted of 50% acetonitrile, 47.5% water, and 2.5% trifluoroacetic acid. There were pipetted 500 μL of 100% acetonitrile, 475 μL of distilled water, and 25 μL of 100% trifluoroacetic acid into an Eppendorf tube. Subsequently, 250 μL of organic solvent with ‘HCCA matrix portioned’ was added to the Eppendorf tube.
Sample preparation and identification: The colonies were resuspended in 300 μL of sterile distilled water after incubation, and 900 μL of absolute ethanol was added. The mixture was centrifuged at 10,000× g for 2 min. The pellet was centrifuged again after the supernatant was discarded. The precipitate was allowed to dry at room temperature. Then, 30 μL of formic acid (70%) and 30 μL of acetonitrile were added and mixed thoroughly with the pellet. The solution was centrifuged at maximum speed for 2 min, and 1.5 μL of the supernatant was spotted on a polished MALDI target plate (Bruker Daltonics, Bremen, Germany). Then, 1.5 μL of the matrix solution was added to each spot and allowed to dry. Immediately after drying, the samples were processed on a MALDI-TOF MS spectrometer with flexControl software (BrukerDaltonics, Bremen, Germany). Each spectrum was obtained by averaging 40 laser shots obtained in automatic mode with the minimum laser power necessary to ionize the samples. The spectra were analyzed and compared to the database according to real-time software, v3.1 classification [23].
Statistical analysis: All measurements and analyses were carried out in triplicate. The experimental data were evaluated by using IBM SPSS Statistics 26 (IBM Corporation, Armonk, New York, NY, USA). Analysis of variance (ANOVA) was used to evaluate the results. Correlation analyses were performed using an F-test and Tukey’s HSD test. Levene’s test was run to check the homogeneity of variances.

The chemical composition of C. caphora var. Linalolifera, used in the study, is presented in Table 1. Linalool is the major compound, accounting for 98.1% of the total profile; if other forms of linalool are considered, they make up to 99.5% of the total profile. Linalool is a terpene with an alcohol group, and is expected to be the major compound in the EO of this chemotype of C. camphora.
The composition of C. limon EO is presented in Table 2. As expected, most of the components are monoterpenes; the main compound is α-limonene (58.9%), followed by β-pinene (13.3%) and γ-terpinene (11.2%).

C. camphora (98% linalool) and C. lemon (58% α-limonene) have a positive effect on the microbial quality of fish meat when added to rainbow trout filets. C. camphora EO at a concentration of 1% in rainbow trout and combined with vacuum packaging is highly effective against the bacterial growth of total viable counts and lactic acid bacteria. C. lemon EO at a concentration of 1% is the most effective against coliform bacteria. The use of a combination of essential oils with vacuum packaging has the benefit of extending the shelf life of rainbow trout meat, and it would therefore be appropriate to use them in practice. Dominant microbial families isolated from rainbow trout fillets are Pseudomonadaceae and Aeromonadae.

This work has been supported by the grants of the APVV-20-0058, ‘The potential of the essential oils from aromatic plants for medical use and food preservation.’

This publication was supported by the Operational Program ‘Integrated Infrastructure’ within the project: Demand-driven research for sustainable and innovative food, Drive4SIFood 313011V336. 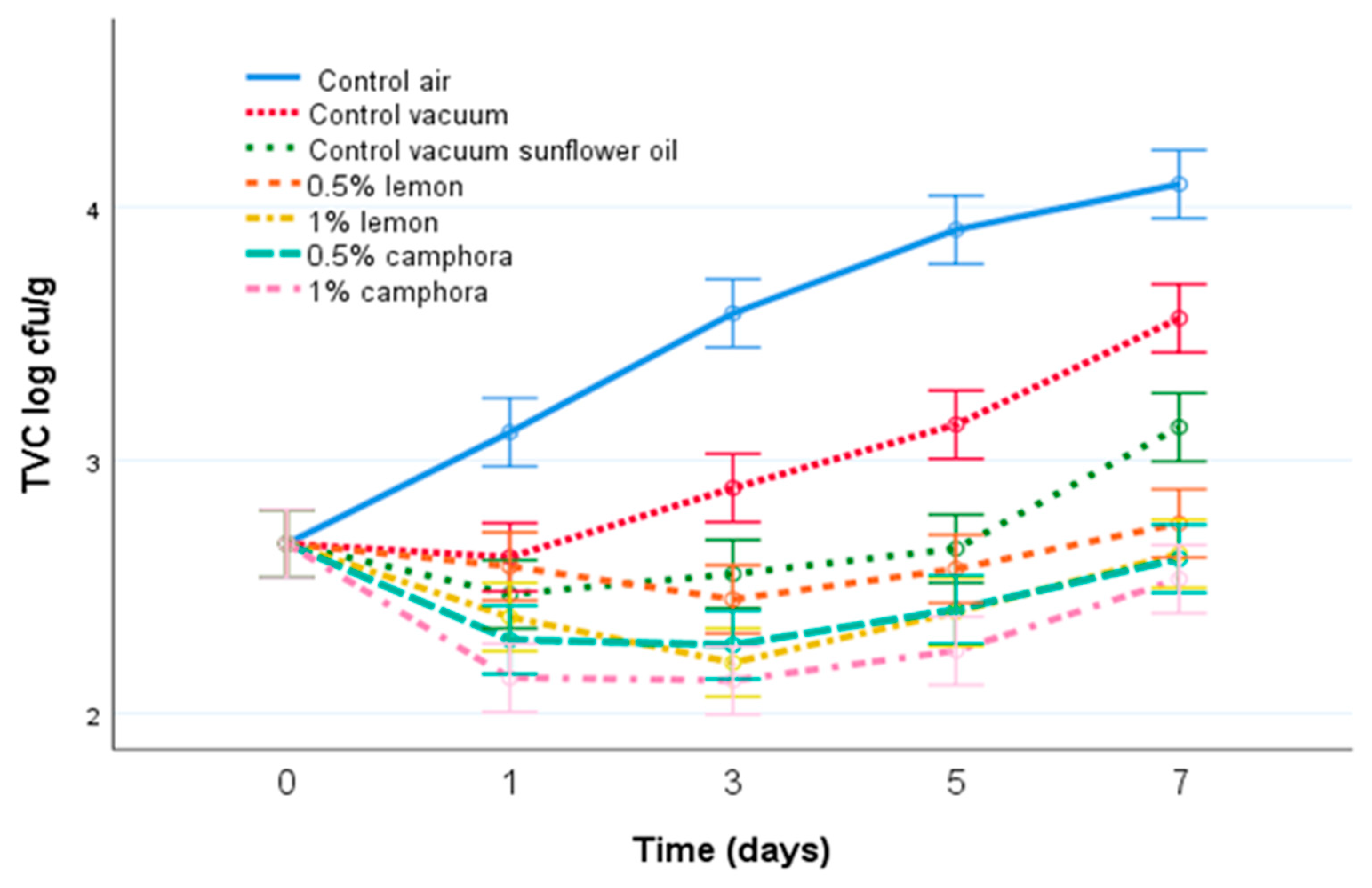 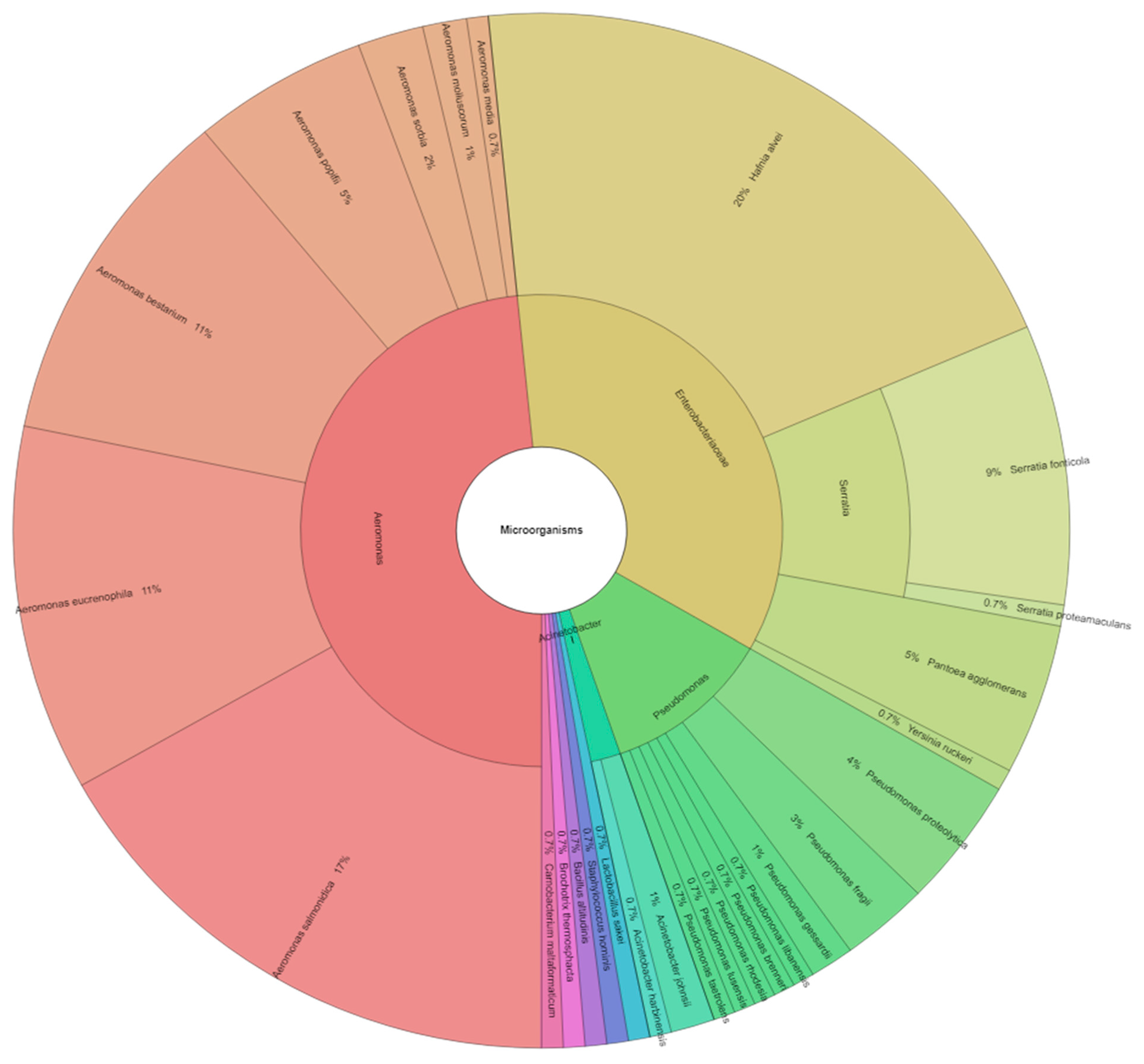