Agonistic behavioural interactions play a decisive role in the competition for food, space, mating opportunities, and establishing social rank. We propose the use of the number of bites on the pelt of red deer as an index of agonistic interactions between group members. Using behavioural data from a 14-year time series of a captive population of Iberian red deer (Cervus elaphus), we found that deer that were of higher social rank, heavier, living in smaller groups, or under no heat stress conditions suffer less pelt bites than those of lower social rank, lighter, living in bigger groups, or under heat stressing conditions. Hinds that gave birth earlier in the parturition period suffered less pelt biting than those that gave birth around the peak of the parturition season. Pelt biting is useful to identify management situations in which deer welfare could be at stake.

Agonistic behavioural interactions play a decisive role in the competition for food, space, mating opportunities, and establishing social rank. We used pelt biting (number of bites on an animal’s body) as a proxy for assessing the intensity of agonistic animal interactions and how it responded to social, population, and heat stress factors. We modelled a 14-year time series of pelt biting records and observational data of agonistic interactions on a population of captive Iberian red deer (Cervus elaphus). We found that (i) the higher the social rank of deer, the lower the number of pelt bites received; (ii) increasing heat stress conditions caused deer to suffer more pelt bites; (iii) males received more bites than females; (iv) the heavier the deer, the lower the number of bites on their bodies; (v) the bigger the group, the more bites exhibited on its members; (vi) deer 5–6 years old suffered greater rate of pelt biting than younger or older deer; and (vii) hinds that gave birth earlier in the parturition period suffered less pelt biting than those that gave birth around the peak of the parturition season (p < 0.01 for all effects). Pelt biting is useful to predict management situations in which deer welfare could be at stake. View Full-Text
Keywords: agonistic interactions; animal welfare indicator; stress; red deer; management agonistic interactions; animal welfare indicator; stress; red deer; management
►▼ Show Figures 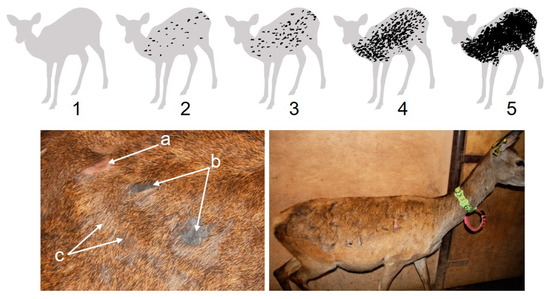