Monitoring Behaviour in African Elephants during Introduction into a New Group: Differences between Related and Unrelated Animals

African savannah elephants are able to greatly modify the vegetation around them through their foraging activities. Accordingly, studying the factors that affect elephant foraging behaviour during different seasons are important to understand their impact on the environment and will also aid in predicting how elephants might react to potential threats such as climate change and land transformation. This article aimed to reinforce current knowledge regarding elephant foraging behaviour by examining how the behaviour is affected across (a) season (wet versus dry); (b) time of day (before or after noon); (c) presence or absence of other elephants; and (d) reproductive state; for six adult elephant bulls monitored in Kruger National Park. Results indicated that elephant foraging behaviour is indeed affected by seasonal and social factors. This highlights how these animals are able to adjust their foraging behaviour during the day to aid in thermoregulation, or during different seasons to fulfil their nutritional requirements. Furthermore, this study opens the door for further research regarding how reproductive activity affects the foraging behaviour of male elephants.

African savannah elephants (Loxodonta africana) are well-known as ecosystem engineers with the ability to modify vegetation structure. The present study aimed to examine how male elephant foraging behaviour is affected across (a) season (wet versus dry); (b) time of day (before or after noon); (c) presence or absence of other elephants; and (d) reproductive state (musth versus no musth). Six radio-collared adult elephant bulls were observed twice per week from June 2007–June 2008 in Kruger National Park (KNP), South Africa. Using generalized linear mixed effect modeling, results indicate that elephant bulls graze more during the wet season and browse more during the dry season. To potentially offset the costs associated with thermoregulation during the heat of the day, KNP elephants spent more time foraging during the morning, and more time resting during the afternoon. Male elephants also foraged significantly less when they were associated with females compared to when they were alone or with other males. This is likely due to male–female associations formed mainly for reproductive purposes, thus impeding on male foraging behaviours. In contrast, the condition of musth, defined by the presence of related physical signs, had no significant effect on foraging behaviour.
Keywords:
mega-herbivore; sociality; grazing; browsing; bimodal feeding; diet-switching; keystone species

This research project commenced with the permission of the University of Pretoria Animal Ethics Committee (AEC) (Ethical clearance number: V012/06), as well as the South African National Parks’ Conservation Services.

Kruger National Park (KNP) is found in the North-eastern part of South Africa and covers an area of ~20,000 km2. The climate and geological substrate differ throughout the park, and this provides room for a diverse array of vegetation types [49]. This allows mixed-feeders (such as elephants) to selectively forage and adjust their diets according to resource availability across seasons. In the KNP, shifts in diet due to differences in climate, or vegetation structure, can be easily studied due to the extensive body of literature documenting the ecotypes found there [23,50]. The region experiences seasonal rainfall, with the wet season occurring mostly from November to April [50]. This study was conducted in the Northern parts of the KNP and observations spanned across an area covering ~5 500 km2 (Figure 1). The vegetation type found in this area is predominantly savannah and shrubland, with woody cover ranging from dense to more sparse [40,51].

Observational data were collected from six adult male African savannah elephants (referred to as Bulls 1–6) from June 2007–June 2008 (Table 1 and Table 2). Location data for each elephant was obtained from the former Save the Elephants’ Transboundary Elephant Research Program currently known as Elephants Alive, via previously fitted GPS/radio trackers. Behavioural observations took place twice per week, per elephant, after the GPS locations of each bull had been established. Each individual was observed for a minimum of 30 min per sampling session, and sampling was conducted ad libitum [52]. The behavioural observations recorded were based on whether individuals were foraging (subdivided into browsing versus grazing) or resting as well as time spent on each of these behaviours.

Time of day was categorised as either before noon (05h00–12h00) or after noon (12h01–18h00). Rainfall data were also collected throughout the study period. These data were then used as a proxy to determine the season (wet versus dry) during which observations were made. Precipitation data were collected monthly at Letaba, Shingwedzi, and Mooiplaas (Figure 1). Dry seasons were recorded for the months of June–October 2007 and May–June 2008 (52–80 mm of rainfall during these periods) and a wet season occurred between November 2007 and April 2008 (378–588 mm of rainfall). This classification is in line with other studies conducted in the KNP, which indicate that the months November-April receive most of the annual precipitation [50].

Data relating to “association” were recorded based on the sex composition of the groups within which the focal bulls were observed. Association categories were defined based on whether the elephants were observed alone, accompanied by other bulls only, or accompanied by mature females (whether other bulls were present or not). Elephants were classified as being associated with one another when they were observed to be in close proximity (not more than 10 body lengths apart) and when they moved together in a unified way during the observation period [40,51].
Injuries were noted if any swelling or signs of skin penetration were present, if individuals presented with an abnormal gait, or lifted their presumably injured foot whenever possible (especially when resting) [51]. Both Bulls 1 and 3 sustained foot injuries during the dry season of 2007. Bull 1 exhibited these injuries from June–October 2007, whilst Bull 3 showed signs of injury from August–October 2007. A priori testing revealed that injuries affected results regarding time spent grazing and browsing. As such, the individuals that presented with foot injuries (Bulls 1 and 3) were removed from analyses for the time during which they were injured.

2.6. Presence or Absence of Musth

Periods of musth were determined by looking for any visible signs of temporal gland secretion (TG) and temporal gland swelling (TGS), characteristic urine discharge (UD) accompanied by a grey to greenish discolouration of the penis and sheath, as well as the strong odour that accompanies this period [37,40]. The time and duration focal bulls experienced musth differed during the study period (Figure 2).

Due to sampling being conducted ad libitum, time spent observing the elephants was not constant, and therefore observational data were transformed to represent a percentage of total time spent observing each individual. Generalized linear mixed-effect regression models [53] were used in order to assess the effect of time of day, season, association, and musth on the percentage time spent foraging, grazing, browsing, and resting, respectively. Individual data sets during the time injuries were observed for Bulls 1 and 3 were excluded from analyses in order to avoid any influence their injuries might have on overall results. For each model, “individual” was included as a random effect to account for any clustering of observations and to account for unequal sampling sessions per individual. To correct for autocorrelation of measurements as a result of the effect of possible individual foraging preferences between elephants, a first-order autoregressive process was also modeled by using the autocorrelation function (ACF) [54]. An autocorrelation value was estimated using a single-lag regression of the residuals for all models (Table 3). For all analyses, alpha was set at 0.05 and significance inferred at 5% and all t-statistics were obtained from modeling results. All analyses were conducted in RStudio version 4.0.3 [55]. Packages mass [56], ggplot2 [57], rstatix [58], and car [59] were used to run statistical analyses and graphically represent the data. Results are presented as boxplot graphs with the line indicating the median of the data; the box, the 25th, and 75th percentiles and the bars indicating the min and max values; whilst dots represent outliers.

3.3. Presence or Absence of Musth

This study successfully showed how seasonal and social factors contribute to shifts in male African savannah elephant foraging behaviour. Elephants spent more time foraging during the first half of the day, opting to spend more time resting during the latter half. They tend to graze more during the wet season, and browse more during the dry season. Male elephants foraged significantly less when they were with females, and bulls in musth showed no significant differences in their foraging behaviour or overall activity patterns. These findings strengthen our understanding of adult male African savannah elephant feeding ecology and behaviour, as well as some of the possible drivers behind these factors. By improving and reaffirming knowledge surrounding these factors, we are now able to better understand how elephants influence the environment around them. This knowledge can also aid in predicting how elephants might react to potential threats such as climate change and land transformation.

This research was funded partly by the University of Pretoria, Claude Leon Foundation the Novartis/SAVF Wildlife Research Fund and the German Primate Centre.

The study conducted was approved in December 2006 by the Animal Ethics Committee of the University of Pretoria, South Africa (V012/06).

Data available in a publicly accessible repository. The data presented in this study are openly available in the University of Pretoria (Figshare) research repository and can be found at https://doi.org/10.25403/UPresearchdata.15105591.v1 (accessed on 21 August 2021).

We thank the South African National Parks for kindly giving us permission to work in Kruger National Park. We also are grateful to all the field guides for their support in the field. 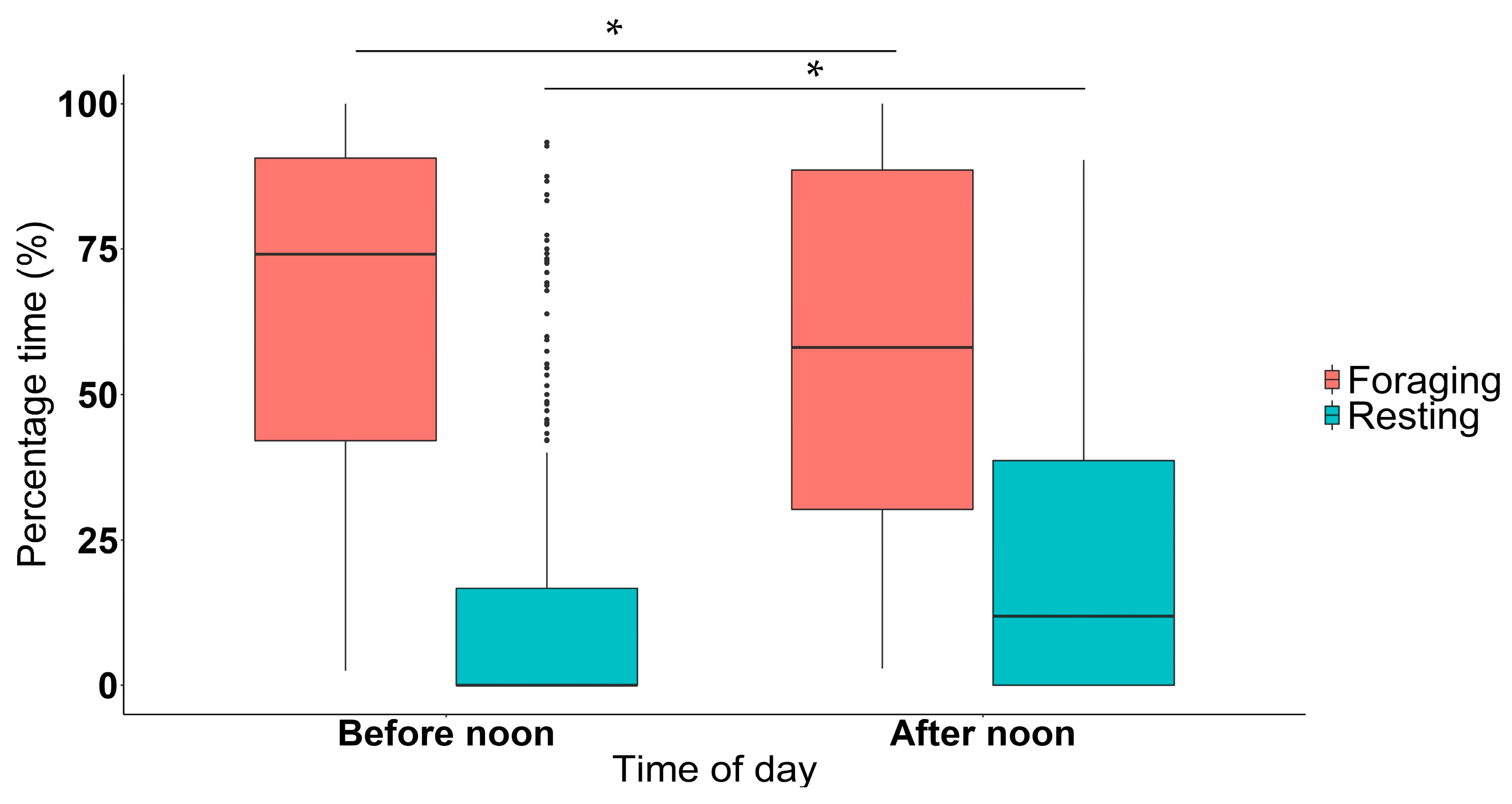 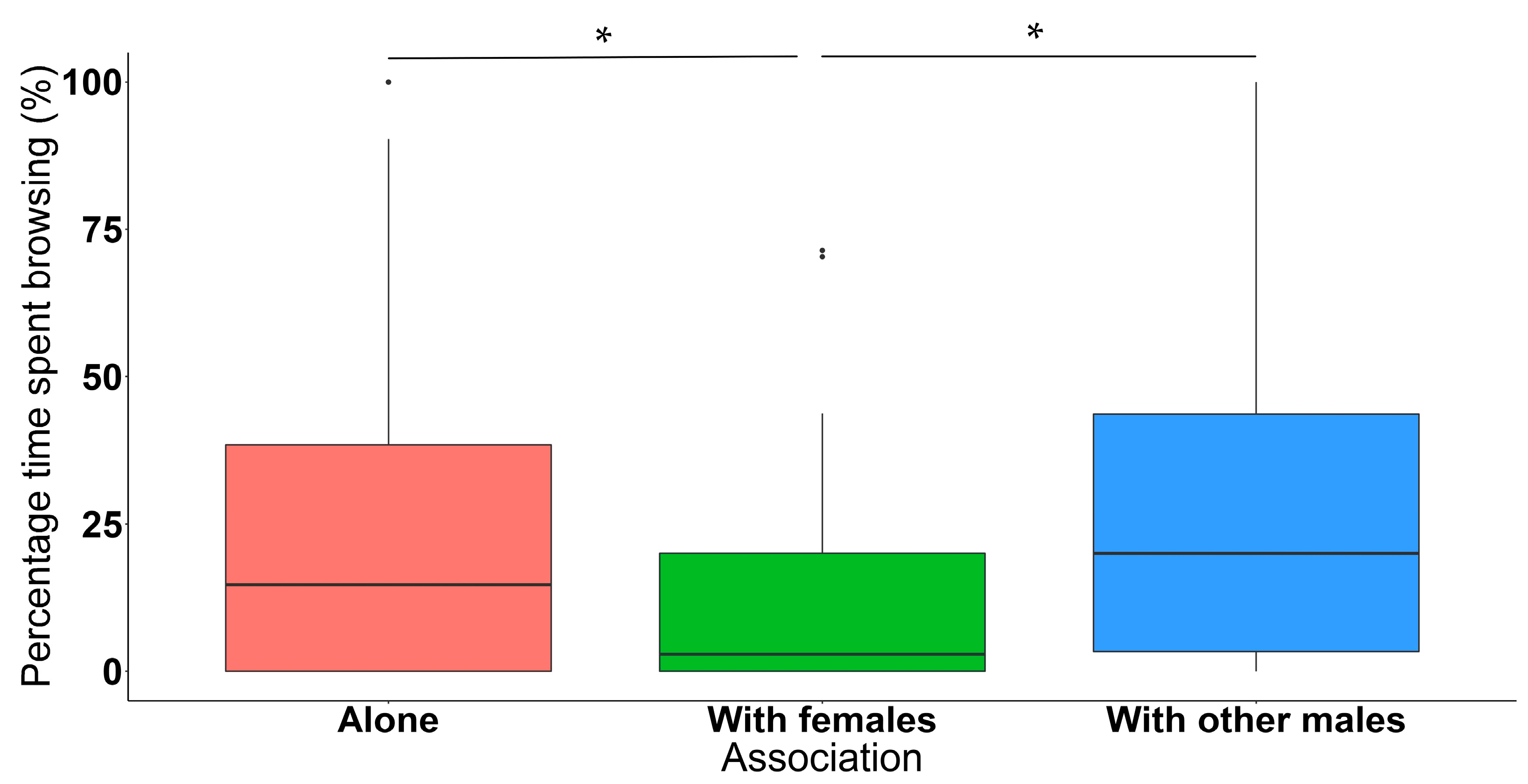