Aggression between pigs in pig husbandry is common during regrouping but rare in stable social groups. Farmers report the occurrence of lethal gang aggression in stable groups of pigs, whereby the group attacks one group member until it is dead. Our aim was to document this extreme type of aggression and to identify potential causes. Forty-two farmers, experiencing lethal gang aggression or not, filled out a survey about their farm management. From 91 victims, information was obtained on their injuries and body condition. Gang aggression occurred more on farms with deep straw bedding, a housing type commonly associated with better animal welfare. However, the presence of straw may also be related to other factors, which could not be disentangled here. Gang aggression did not relate to the genetic line, breeding company or feed type. It equally occurred between females and males and tended to occur more in winter. Victims were covered in injuries, but had a healthy body condition, whereas survivors had a lower body condition. Overall, the cause seems multi-factorial, and further research on the occurrence of lethal gang aggression is needed.

Intraspecific coalitional aggression is rare among all species, especially within stable social groups. We report here numerous cases of intraspecific lethal gang aggression within stable groups of domestic pigs. The objective was to describe this extreme aggression and to identify potential causes. Management data were collected from farms with (n = 23) and without (n = 19) gang aggression. From one farm, 91 victims were assessed for skin injuries and body condition score. Lethal gang aggression was significantly associated with deep straw bedding, which may be related to various other factors. Gang aggression tended to occur more in winter, and was unrelated to genetic line, breeding company, group size or feed type. It occurred equally in female-only and mixed sex groups (male-only groups were not represented), from around eight weeks of age. Injuries typically covered the whole body and were more severe on the front of the body. Victims who survived had a lower body condition score and fewer injuries than victims found dead. There are still many unknowns as to why this abnormal social behaviour occurs and it deserves further research attention, both for its applied relevance to animal welfare as for the evolutionary background of lethal gang aggression. View Full-Text
Keywords: aggression; farm; death; Sus scrofa; social behaviour; animal welfare; victimization; coalition; attacks aggression; farm; death; Sus scrofa; social behaviour; animal welfare; victimization; coalition; attacks
►▼ Show Figures 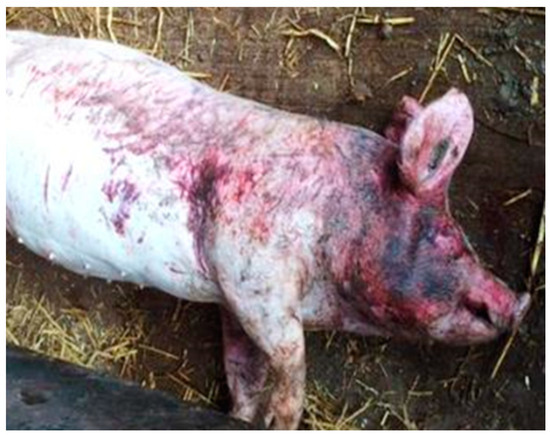