Understanding the Relationship between Intention and Cat Containment Behaviour: A Case Study of Kitten and Cat Adopters from RSPCA Queensland
Previous Article in Journal

The most important blood group system in cats is the AB, in which cats are classified as type-A, B or AB. Cats have antibodies against the blood type they do not possess, called alloantibodies. The aims of this study were to update blood type prevalence in cats from Northern Italy and study for the first time the blood type in cats from an insular region of Southern Italy, Sicily; to detect alloantibodies in these feline populations; to compare results with previous studies performed in Italy and between regions in Northern and Southern Italy. Cats from Southern Italy had the highest prevalence of type-B and type-AB, and the lowest prevalence of type-A blood in Italy. In particular, type-AB prevalence was higher than all previous reports in non-pedigree cats in Europe and the Italian prevalence of anti-type-B alloantibodies in type-A cats was the lowest reported worldwide. These results highlight the usefulness of regional studies to report different prevalences in feline blood types. Compatibility tests such as blood typing and cross matching must be considered fundamental in cats of any origin to ensure safe and efficient blood transfusion and to prevent neonatal isoerythrolysis.

The aims of this study were to determine the prevalence of A, B and AB blood types and alloantibodies in non-pedigree cats from two regions, one in Northern and one in Southern Italy (Lombardy and Sicily, respectively). A total of 448 samples (52.0% from Northern and 48.0% from Southern Italy) were blood typed. The prevalence of A, B and AB blood types in northern and southern cats were 91.0%, 5.2%, 3.8%, and 77.2%, 12.1% and 10.7%, respectively. The prevalence of type-A blood in southern cats was significantly lower (p = 0.0001) than in northern cats, while type-B and AB blood were significantly higher (p = 0.0085 and p = 0.0051, respectively) in Southern compared to Northern Italian cats. Alloantibodies against type-A blood were found in 94.1% of type-B cats, 11.2% of type-A cats had alloantibodies against type-B blood, while no type-AB cats had alloantibodies with no significant difference between the two Italian populations. Type-AB prevalence in non-pedigree cats in Southern Italy was the highest reported in Europe. Italian type-A cats had the lowest worldwide prevalence of alloantibodies against type-B blood. These results highlight the usefulness of regional studies to report different prevalences in feline blood types and reinforce the importance of blood typing cats before transfusions and mating. View Full-Text
Keywords: alloantibodies; blood type; feline; Italy; neonatal isoerythrolysis; transfusion reaction alloantibodies; blood type; feline; Italy; neonatal isoerythrolysis; transfusion reaction
►▼ Show Figures 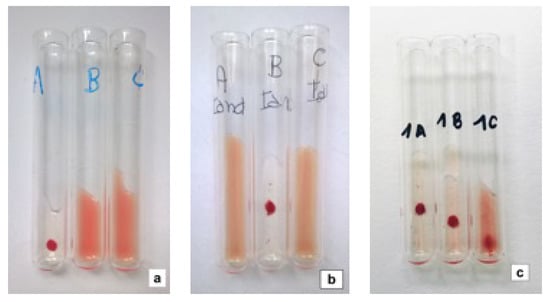