These protocols were approved by the Institutional Animal Care and Use Committee, Hill’s Pet Nutrition, Inc., Topeka, KS, USA (Permit Numbers: CP13, CP14). The dogs used in this research were immunized against Rabies (rabies), Bordetella (bordetella), Protoparvovirus (parvovirus), Adenoviridae (adenovirus), and Canine morbillivirus (canine distemper). All cats were immunized against Rabies (rabies), Felid alphaherpesvirus 1 (viral rhinotracheitis), Feline caliciviridae (feline calicivirus), and Feline panleukopenia (feline panleukopena virus). No pets had chronic systemic disease, which was evaluated with annual urinalysis, serum biochemical analyses, complete blood count determination, and physical examination. Cats were housed individually but had access to group socialization, interaction with animal care technicians, and toys. Dogs were housed individually and had access to exercise in groups, interaction with animal care technicians, and toys. Dogs and cats were in facilities with varied seasonal changes through access to natural light. Some of these studies were used in the 2013 evaluation of metabolizable energy predictive equations [5].
All studies were conducted over a period of 110 months. The canine studies used 226 healthy dogs and the feline studies used 296 healthy short hair domestic cats (Table 1). The dogs included 20 intact females, 102 spayed females, 11 intact males, and 93 neutered males. The cats included 27 intact females, 137 spayed females, 2 intact males and 130 neutered males.
There were 459 canine studies and 427 feline studies. The studies used both canned and dry foods with varying nutrient compositions. There were non-commercial (not available for purchase) and commercial pet foods tested. All of the foods tested met the minimum requirements for complete and balanced nutrition for adult dogs or cats established by the Association of American Feed Control Officials. One food met the minimum requirements for both dogs and cats. Pet food chemical composition is reported in Table 2.
All studies used the AAFCO quantitative collection protocol with a minimum of six adult dogs or cats. In this protocol there are two phases. The pre-collection phase is at least seven days and allows the pets to become acclimated to the test food; food intake is adjusted as needed, so weight is neither gained nor lost. The next phase of 5 days (120 h) is used for total fecal collection. Food intake is controlled by not changing the food offering (which is based on amount needed to maintain weight from the earlier phase). Water is always available. The measurements for ash, crude fiber, fat, protein, moisture and energy were completed by commercial laboratories (Eurofins Scientific, Inc., Des Moines, IA, USA or Ontario Nutri Lab, Inc., Fergus, ON, Canada) using official methods of analysis published by AOAC International. True protein digestibility was calculated by subtracting an estimate of the metabolic protein contained in the feces from the measured fecal protein concentration. It is calculated as follows:
True protein digestibility = [(protein intake − (fecal protein − endogenous metabolic protein))/protein intake]
True protein digestibility is different than apparent protein digestibility, which does not take into account endogenous metabolic protein. Apparent protein digestibility is calculated as follows:
Apparent protein digestibility = [(protein intake − fecal protein)/protein intake]
In order to correct for endogenous metabolic fecal protein (fecal protein not of dietary origin) the endogenous protein correction of 63 mg nitrogen/kg weight to the ¾ power suggested by Kendall et al. was used [6]. This value is in the range of estimates for metabolic fecal protein for the dog and cat [6,7,8].
For the purposes of this study, plant and animal proteins were categorized as follows: animal protein sources include meat, organs, meat meals, meat byproducts and blends of poultry, fish, beef, pork, lamb, and venison. All egg and dairy proteins were also categorized as animal. Plant protein sources include flours, starches, fibers, protein isolates, blends, and whole fruits. Whole grains and vegetables from rice, corn, soy, wheat, pea, potato, flax, algae, apple, sunflower, apple, pecan, tomato, pumpkin, spinach, ginger, rye, citrus, cranberry, sweet potato, green bean, chickpea, bell pepper, quinoa, carrot, zucchini, and sorghum were all categorized as plant sources. Crystalline amino acids were not classified as plant or animal.
Multiple linear regression analysis was performed using stats models 0.9.0 in Python 3.7.3 [9,10,11] to estimate the relationships between protein digestibility and dietary crude fiber, percent of dietary protein from plants, and the potential interaction between crude fiber with percent of dietary protein from plants. The statistical significance of regression coefficients was evaluated by a two-tailed t-test with a significance level of 0.05.

This research was funded by Hill’s Pet Nutrition Inc.

The authors are or have been employees of Hill’s Pet Nutrition, which manufactures and sells pet foods to optimize the protein nutrition of healthy pets and to aid in the management of disease. 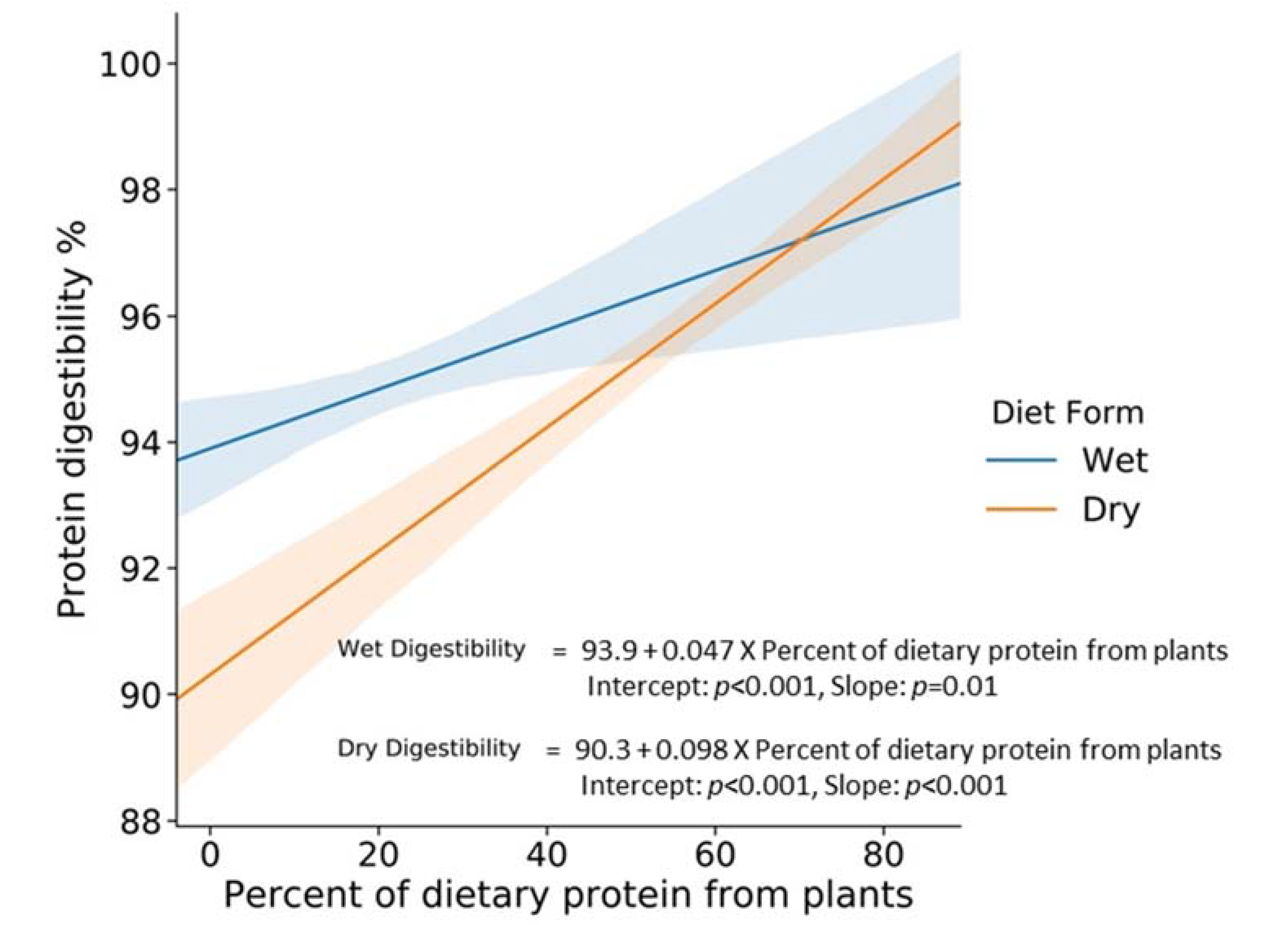