Pre- and postweaning stages are critical in the management of rabbits due to the increased risk of mortalities. Mortality rates during pre- and postweaning periods were 67.10% and 31.90%, respectively. The preweaning mortality was mainly due to causes related to does (95.23%) and infectious agents, including Escherichia coli, and Salmonella (4.77%). The postweaning mortality was mainly referred to managemental factors and infectious causes, including Eimeria species, E. coli, and Salmonella.

This study was conducted to investigate the causes of mortality in young rabbits. A total of 110 V-Line breed female rabbits aged 5 m were used in this study. Rabbit kits were examined daily in pre- and postweaning stages to detect clinical disorders that caused death. The postmortem examination was carried out on dead kits. Furthermore, rabbits were examined for the probable bacteriological and parasitological causes of death. Fecal samples were collected from each dead kit and examined by standard microbiological procedures for bacterial pathogens and macroscopically and microscopically for the presence of endo- and ectoparasites. Throughout two breeding seasons, 2238 newborns were obtained, of which 1736 died, accounting for a 77.57% mortality rate. During preweaning (1st month of age) and postweaning (up to 3 months of age), 1501 (67.10%) and 235 (31.90%) deaths were recorded, respectively. A postweaning fecal examination revealed that 198 out of 229 (86.50%) were diarrheic rabbits due to Eimeria infection. Cittotaenia spp. eggs were detected in 4.37% of fecal samples, and mites (Sarcoptis scabiei) were present in 6.55%. E. coli was detected in 100% of examined animals during pre- and postweaning periods; however, Salmonella spp. were 97.22% and 43.67, respectively. Managemental risk factors were the main causes in preweaning mortality, including insufficient milk supply (37.37%), cannibalism (26.38%), mange infestation of a rabbit doe (22.20%), mastitis (4.30%), lack of doe care (5.00%), bronchopneumonia (2.13%), and enteritis (1.80%). However, risk factors in postweaning mortality included sudden death with general septicemia (13.80%), enteritis (9.63%), bronchopneumonia (5.43%), mange infestation (2.04%), and malnutrition (0.81%). In conclusion, the etiology of preweaning mortality in kits was related mainly to the doe, especially managemental risk factors. However, a combination of multiple pathogenic agents (parasites and bacteria) and managemental factors was reported in the postweaning stage. Careful attention must be paid to avoid these causes. View Full-Text
Keywords: pre- and postweaning; rabbits; mortality; Eimeria; Salmonella; E. coli; management pre- and postweaning; rabbits; mortality; Eimeria; Salmonella; E. coli; management
►▼ Show Figures 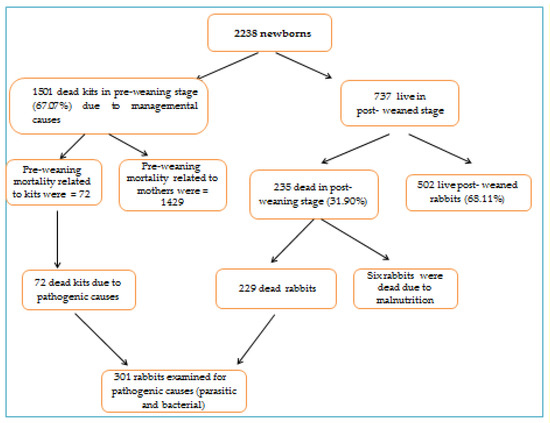