For animal welfare scientists and advocates who operate in English, it may be assumed that animal welfare is not an area that receives attention within China; coupled with an awareness that China has not yet opted to enact animal welfare legislation, the reason for this assumption may also be in part due to the perceived lack of animal welfare literature coming from the country. Operating under the hypothesis that animal welfare literature emanating from China may have instead been published in Chinese, rather than English, this study reports the finding of a systematic search of Chinese animal welfare literature on Chinese databases. We searched for articles and research publications released in a recent 10-year period, specifically related to the welfare of the two most commonly farmed land-based animals in China; pigs and chickens, and identified 854 academic publications. In order to facilitate an understanding of Chinese scientific priorities in the field, we further categorised the identified literature into broader approximate categories of welfare freedoms (e.g., freedom from hunger and thirst, freedom to express natural behavior). The identification of a significant animal welfare literature represents an opportunity to increase collaboration with Chinese partners by identifying areas of mutual interest, and to share mutually beneficial knowledge more readily. This could be sustained by increasing the accessibility of Chinese literature to English speakers, and to English literature to Chinese speakers.

Farm animal welfare in the People’s Republic of China (henceforth, China) is not well represented in the international scientific literature. This may lead researchers, advocates and those with agricultural partnerships in China to assume that animal welfare is not a field of interest there. This study reports a literature review of published pig and poultry welfare research in China using Chinese scientific databases. We aimed to determine which areas of welfare research have recently received academic attention in China. From an understanding of areas being studied, current and emerging priority areas for research could be determined. This study identified 854 academic publications citing pig or chicken welfare in China published between 2008 and 2018. Within these publications, two broader areas of significant attention were addressed in the context of animal welfare; yield and product quality, such as feeding, biosecurity and antimicrobial resistance, including immunity and second, the relationship of animal welfare with the Chinese philosophy of ‘ecological agriculture.’ Holistic systems were advocated to maximize sustainability and maintain a healthy environment, such as the creation of fermented bedding for pigs. Environmental enrichment was also a focus of attention, demonstrating an interest in animals’ mental welfare, which was usually conjectured from their behavior. Few of the articles were translated into English or other languages and therefore most were largely unavailable to the English-speaking global scientific community. This presents an opportunity to provide relevant animal welfare knowledge, which could improve animal welfare globally. China is a global animal trade leader and the home of the largest agricultural industries in the world. An increase in collaboration on animal welfare research and understanding of the advancements that have been made in China, as reviewed in this manuscript, could advance farm animal welfare from a global perspective. View Full-Text
Keywords: animal welfare; China; science; bibliometric review; livestock production; Asia; pigs; poultry animal welfare; China; science; bibliometric review; livestock production; Asia; pigs; poultry
►▼ Show Figures 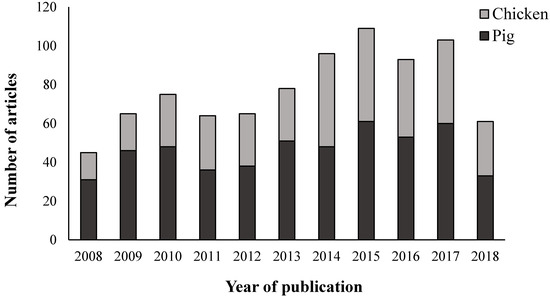