The Influence of Anaesthetic Drugs on the Laryngeal Motion in Dogs: A Systematic Review
Previous Article in Journal

Determination of Praziquantel in Sparus aurata L. after Administration of Medicated Animal Feed

Milk secreted from mammary glands is an important nutrition source for offspring after parturition. Mammary gland development and lactation ability have important effects on the growth and health of the offspring. Many studies have demonstrated that external factors, including the environment and nutrition influence the development of mammary glands. Lauric acid is a fatty acid that has many nutritional and physiological properties. In this study, we investigated the effects of dietary supplementation of lauric acid on lactation function and mammary gland development in lactating mice. We found that dietary supplementation of lauric acid during lactation might enhance the mammary development to promote the lactation function of mice. Through the study of mice, we hoped that the results could be applied to animal feed development and animal breeding production. 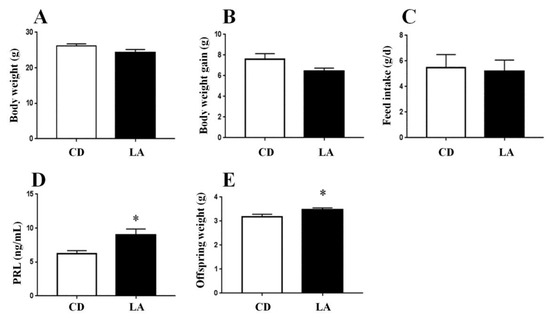