Reproductive and Behavioral Evaluation of a New Immunocastration Dog Vaccine

Population control of free-roaming dogs is a topic of great interest worldwide. Immunocastration (immune blockade of GnRH-I, the hormone that commands reproductive ability) has emerged as a complementary alternative to surgical castration. In this work, the effectiveness of an immunocastration vaccine for dogs was evaluated, as were the reproductive and behavioral characteristics of vaccinated animals. Two consecutive trials were carried out for this purpose. A first trial was conducted under experimental conditions, observing an immune response against the vaccine over a nine-month period that was associated with changes in the testicular function of the animals (decrease in testosterone and alteration of the characteristics of the ejaculate). The second trial was conducted on dogs who had owners, and vaccinated animals showed an immune response against the five-month vaccine and a decrease in unwanted behaviors associated with the presence of sex hormones. While more studies are needed, this vaccine is emerging as a promising tool for the reproductive and behavioral management of male dogs.

Canine immunocastration development has been of interest for many years as a complementary strategy to surgical castration. The purpose of this paper was to verify the effect of a recombinant vaccine for dog immunocastration. Two tests were done, one under controlled conditions and a second under field conditions. Animals were injected with 1 mL of 500 µg GnRXG/Q recombinant protein; 500 µg of low molecular weight chitosan as adjuvant; 1 mL NaCl 0.9% q.s. In the first trial, eight Beagle male dogs between the ages of 1 and 3 comprised the sample, randomly divided into two groups: vaccinated group (n = 7) and control group (n = 2). The second trial had 32 dogs with owners. In the first controlled conditions trial, the vaccine produced specific antibodies that remained until the end of the trial (day 270), inducing reduced testosterone and spermiogram changes in the immunized animals. In a second trial, on the field, specific immunity was induced, which remained high up to day 150. The vaccine also reduced sexual agonistic and marking behaviors. This new vaccine proved to be safe, immunogenic, capable of reducing gonadal functionality, and had a positive effect on inducing reduced sexual, agonistic, and marking behavior of the animals. View Full-Text
Keywords: GnRH; immunocastration; vaccine; dog; non-surgical sterilization; reproduction GnRH; immunocastration; vaccine; dog; non-surgical sterilization; reproduction
►▼ Show Figures 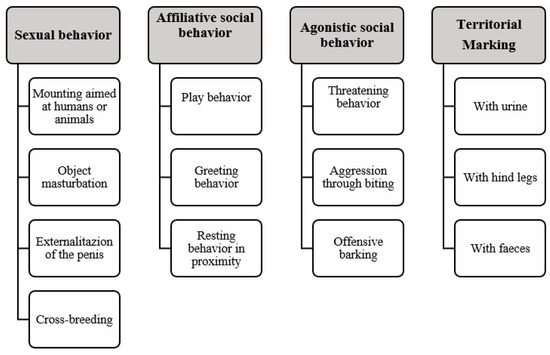