Dietary Application of Tannins as a Potential Mitigation Strategy for Current Challenges in Poultry Production: A Review
Previous Article in Special Issue

What’s in a Meow? A Study on Human Classification and Interpretation of Domestic Cat Vocalizations

Cat–human communication is a core aspect of cat–human relationships and has an impact on domestic cats’ welfare. Meows are the most common human-directed vocalizations and are used in different everyday contexts to convey emotional states. This work investigates adult humans’ capacity to recognize meows emitted by cats during waiting for food, isolation, and brushing. We also assessed whether participants’ gender and level of empathy toward animals in general, and toward cats in particular, positively affect the recognition of cat meows. Participants were asked to complete an online questionnaire designed to assess their knowledge of cats and to evaluate their empathy toward animals. In addition, they listened to cat meows recorded in different situations and tried to identify the context in which they were emitted and their emotional valence. Overall, we found that, although meowing is mainly a human-directed vocalization and should represent a useful tool for cats to communicate emotional states to their owners, humans are not good at extracting precise information from cats’ vocalizations and show a limited capacity of discrimination based mainly on their experience with cats and influenced by gender and empathy toward them.

Although the domestic cat (Felis catus) is probably the most widespread companion animal in the world and interacts in a complex and multifaceted way with humans, the human–cat relationship and reciprocal communication have received far less attention compared, for example, to the human–dog relationship. Only a limited number of studies have considered what people understand of cats’ human-directed vocal signals during daily cat–owner interactions. The aim of the current study was to investigate to what extent adult humans recognize cat vocalizations, namely meows, emitted in three different contexts: waiting for food, isolation, and brushing. A second aim was to evaluate whether the level of human empathy toward animals and cats and the participant’s gender would positively influence the recognition of cat vocalizations. Finally, some insights on which acoustic features are relevant for the main investigation are provided as a serendipitous result. Two hundred twenty-five adult participants were asked to complete an online questionnaire designed to assess their knowledge of cats and to evaluate their empathy toward animals (Animal Empathy Scale). In addition, participants had to listen to six cat meows recorded in three different contexts and specify the context in which they were emitted and their emotional valence. Less than half of the participants were able to associate cats’ vocalizations with the correct context in which they were emitted; the best recognized meow was that emitted while waiting for food. Female participants and cat owners showed a higher ability to correctly classify the vocalizations emitted by cats during brushing and isolation. A high level of empathy toward cats was significantly associated with a better recognition of meows emitted during isolation. Regarding the emotional valence of meows, it emerged that cat vocalizations emitted during isolation are perceived by people as the most negative, whereas those emitted during brushing are perceived as most positive. Overall, it emerged that, although meowing is mainly a human-directed vocalization and in principle represents a useful tool for cats to communicate emotional states to their owners, humans are not particularly able to extract precise information from cats’ vocalizations and show a limited capacity of discrimination based mainly on their experience with cats and influenced by empathy toward them. View Full-Text
Keywords: domestic cat; Felis catus; cat–human communication; meow; empathy; questionnaire domestic cat; Felis catus; cat–human communication; meow; empathy; questionnaire
►▼ Show Figures 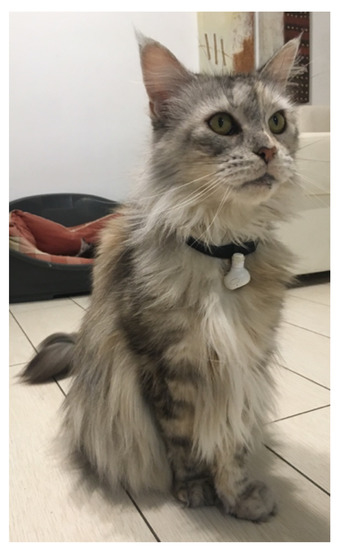