Studying visual illusions in animals allows researchers to reveal similarities and differences between how human and non-human species perceive the world around them. Recently, investigations into dogs have found evidence for the differential perception of visual illusions, when compared with human observers. Here, we extended this line of investigation by testing dogs’ susceptibility to numerosity illusions. This type of illusion occurs when an individual under- or overestimates the number of objects presented in a visual scene owing to the spatial arrangement of the objects. In the current study, we observed the spontaneous likelihood for dogs to approach a larger quantity of food items. In Experiment 1, we first established whether dogs would try to maximize their food intake within the experimental context. Following this, Experiments 2 and 3 presented food items arranged so as to generate a well-known numerosity illusion—the Solitaire illusion. Overall, dogs were able to select the larger quantity of food (Experiment 1), but did not exhibit any evidence of a numerosity misperception in Experiments 2 and 3. Our results reinforce the idea that dogs’ representation of the world differs significantly from ours.

Recent studies have showed that domestic dogs are only scantly susceptible to visual illusions, suggesting that the perceptual mechanisms might be different in humans and dogs. However, to date, none of these studies have utilized illusions that are linked to quantity discrimination. In the current study, we tested whether dogs are susceptible to a linear version of the Solitaire illusion, a robust numerosity illusion experienced by most humans. In the first experiment, we tested dogs’ ability to discriminate items in a 0.67 and 0.75 numerical ratio. The results showed that dogs’ quantity discrimination abilities fall in between these two ratios. In Experiment 2, we presented the dogs with the Solitaire illusion pattern using a spontaneous procedure. No evidence supporting any numerosity misperception was found. This conclusion was replicated in Experiment 3, where we manipulated dogs’ initial experience with the stimuli and their contrast with the background. The lack of dogs’ susceptibility to the Solitaire illusion suggests that numerical estimation of dogs is not influenced by the spatial arrangement of the items to be enumerated. In view of the existing evidence, the effect may be extended to dogs’ quantitative abilities at large. View Full-Text
Keywords: quantity; dog; numerical cognition; gestalt; illusion; vision; solitaire quantity; dog; numerical cognition; gestalt; illusion; vision; solitaire
►▼ Show Figures 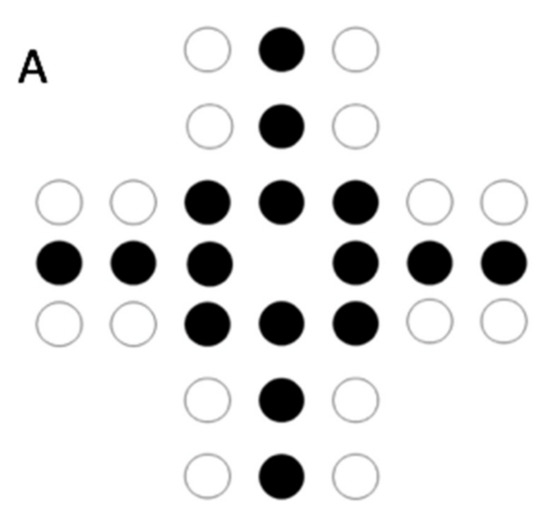