Dreaming about Dogs: An Online Survey

Wolves became dogs over the past 35,000 years. It has been suggested that through domestication, the cooperative nature of wolves and their dependence on pack mates has been re-directed towards humans. This has also affected the social orientation of dogs towards conspecifics. In contrast to wolves, dogs in free-ranging packs are not monogamous and are less cooperative with their pack members. In a previous paper, we found that dogs resting isolated from their pack members were less relaxed/more alert than wolves in the same situation. As social context may affect such results, we replicated this study with pack-living and enclosure-kept dogs resting alone or close to pack members. Specifically, we measured heart rate and heart rate variability as physiological proxies of alertness. We found that dogs were less relaxed/more alert when resting alone than with pack members, but that this may be modulated by social status, i.e., high-ranking dogs being less relaxed than low-ranking individuals. We conclude that relaxation/alertness of dogs during rest depends on social context and that, as in wolves, conspecific pack members still have a role in this. This indicates that domestication has only partially re-directed social orientation in dogs from conspecific pack members to human partners.

Domestication has affected the social life of dogs. They seem to be less dependent on their pack members than wolves, potentially causing dogs to be more alert towards their environment, especially when resting. Such a response has been found in dogs resting alone compared to wolves in the same situation. However, as this may be influenced by social context, we compared alertness (i.e., degree of activation along the sleep–wake continuum—measured via cardiac parameters) of pack-living and enclosure-kept dogs in two conditions: (1) alone, and (2) with pack members, and in two states of activation: (1) inactive wakefulness, and (2) resting. We found that when dogs were resting alone, alertness was higher than when resting in the pack; individual alertness was potentially influenced by social rank. However, alertness was similar in the two conditions during inactive wakefulness. Thus, depending on social context, familiar conspecifics may still provide support in dogs; i.e., domestication has probably only partly shifted the social orientation of dogs from conspecifics to humans. We suggest that cardiac responses of dogs may be more flexible than those of wolves because of their adaptation to the more variable presence of humans and conspecifics in their environment. View Full-Text
Keywords: alertness; conspecifics; dogs; domestication; heart rate; pack; resting; social context alertness; conspecifics; dogs; domestication; heart rate; pack; resting; social context
►▼ Show Figures 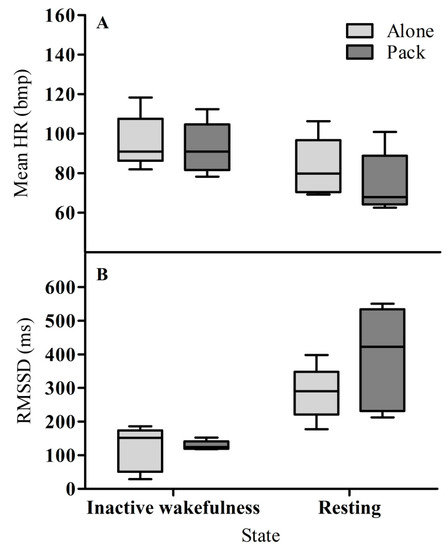