Shukor Md Nor
1 and

This study investigated plant diet of wild Macaca arctoides in the Malaysia–Thailand border region using a chloroplast tRNL DNA metabarcoding approach. It is a comprehensive molecular technique to assess foods eaten by primates. We have chosen chloroplast tRNL because this region has been widely used for identifying plant species. Chloroplast tRNL DNA was amplified and sequenced using the Illumina MiniSeq platform. Sequences were analyzed using the CLC Genomic Workbench software version 12.0 to check for M. arctoides plant diet. Across these samples, we successfully identified 29 plant orders, 46 families, 124 genera, and 145 species. As the first report in Malaysia, the findings provide an important understanding on diet of wild M. arctoides that only reside in Perlis State Park, Malaysia.

Understanding dietary diversity is a fundamental task in the study of stump-tailed macaque, Macaca arctoides in its natural habitat. However, direct feeding observation and morphological identification using fecal samples are not effective and nearly impossible to obtain in natural habitats because this species is sensitive to human presence. As ecological methods are challenging and time-consuming, DNA metabarcoding offers a more powerful assessment of the diet. We used a chloroplast tRNL DNA metabarcoding approach to identify the diversity of plants consumed by free-ranging M. arctoides in the Malaysia–Thailand border region located in Perlis State Park, Peninsular Malaysia. DNA was extracted from three fecal samples, and chloroplast tRNL DNA was amplified and sequenced using the Illumina MiniSeq platform. Sequences were analyzed using the CLC Genomic Workbench software. A total of 145 plant species from 46 families were successfully identified as being consumed by M. arctoides. The most abundant species were yellow saraca, Saraca thaipingensis (11.70%), common fig, Ficus carica (9.33%), aramata, Clathrotropis brachypetala (5.90%), sea fig, Ficus superba (5.44%), and envireira, Malmea dielsiana (1.70%). However, Clathrotropis and Malmea are not considered Malaysian trees because of limited data available from Malaysian plant DNA. Our study is the first to identify plant taxa up to the species level consumed by stump-tailed macaques based on a DNA metabarcoding approach. This result provides an important understanding on diet of wild M. arctoides that only reside in Perlis State Park, Malaysia. View Full-Text
Keywords: Malaysian primates; Macaca arctoides; plant metabarcoding; tRNL Malaysian primates; Macaca arctoides; plant metabarcoding; tRNL
►▼ Show Figures 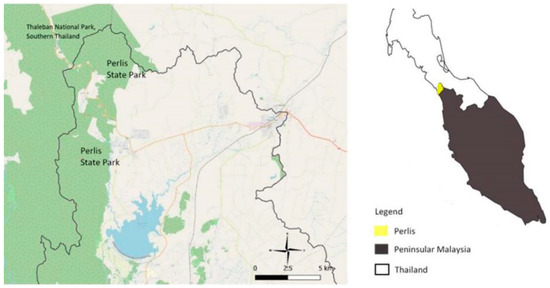