Information about the optimal carbohydrate combination for pigs is scarce. This present study explored the effects of different combinations of starch, non-starch polysaccharides, and mannan-oligosaccharide on the growth performance, nutrient digestibility, and microbial communities in weaned pigs, which contributed a novel way of evaluating the carbohydrate quality of the diet for pigs.

Carbohydrates are the most abundant energy sources for pigs, accounting for 60–70% of total energy intake [1]. Notably, the types and structures of carbohydrates are very complicated, and exert different effects on pigs. Previous studies indicated that feeding with starch in different amylose to amylopectin (AM/AP) ratios showed noteworthy physiological responses to growth performance of pigs [2,3]. Emerging evidence reported that starch in higher AM/AP ratio increased the average daily gain and feed efficiency of finishing pigs [4,5]. Moreover, starch in higher AM/AP ratio could improve intestinal health by regulating gut microbiota, promoting intestinal morphology, and increasing intestinal functions related gene expressions [6,7]. Similarly, the increase of dietary amylose caused the reduction of conditioned pathogens and induced the increase of some beneficial bacteria [8]. Dietary fibers, mainly made up of non-starch polysaccharides (NSP), have been demonstrated in promoting gastrointestinal health both in human and animals [9,10]. Intake of the right amount of dietary fiber did not affect the growth performance of piglets [11]. Moreover, accumulating evidence showed that dietary fiber improved the intestinal morphology and barrier function, decreased diarrhea incidence, and enhanced the proportion of Lactobacillus in gastrointestinal tract of piglets [12,13,14]. In addition, feeding with both soluble and insoluble fiber was more effective than supplementation alone to improve nutrient absorption and intestinal barrier function of pigs [15]. Additionally, dietary fiber-deprived microbiota increased the susceptibility of pathogens and impaired the barrier function of colonic mucosa [16]. Furthermore, some oligosaccharides and polysaccharides are recognized as prebiotics for human and animals, which could be used to stimulate the proportion of Lactobacillus and Bifidobacterium [17,18,19]. Mannan-oligosaccharide (MOS) is derived from yeast cell wall, and could improve the balance of gut microflora and improve intestinal immune function [20]. Importantly, dietary supplement with MOS has been shown to increase the growth performance of pigs [21,22,23,24]. Taken together, starch, dietary fiber, and oligosaccharides have been well documented and exhibited beneficial role on pig’s growth and intestinal health. However, until now, information about the optimal combination of starch, dietary fiber, and oligosaccharide for pigs is limited.
Therefore, the purpose of present study was to fill in the gap of knowledge about the effects of different combinations of starch, dietary fiber, and oligosaccharide on the growth performance, nutrient digestibility, short-chain fatty acid (SCFA) production, and microbial community of weaned pigs, and to evaluate the optimal carbohydrates combination for weaned pigs. An optimal combination of starch, dietary fiber, and oligosaccharide may be a novel metric for assessing carbohydrate quality in relation to swine production.

Experimental proposals and procedures used in the present experiment were conducted in accordance with the Animal Care and Use Committee of Sichuan Agricultural University (Ya’an, China) under permit number DKY-B20131704.

An orthogonal experiment consisting of L9(34) orthogonal array was used in this study. The design involved three factors, and each factor has three levels. Namely, starch (AM/AP ratio 2:1, 1:1, 1:2), NSP levels (1%, 2%, 3%, a mixture of inulin with cellulose by 1:1), and MOS contents (400, 800, 1200 mg/kg). Regardless of the interactions between the three factors, the orthogonal array table L9(34) was used as experimental design and listed in Table 1. In total, 162 crossbred Duroc × (Landrace × Yorkshire) pigs weaned at 21 ± 1 d were provided by a commercial farm and housed in a temperature and light-controlled nursery house with completely slotted floors, and fed a common pre-starter diet for 5-days adaptation. Pigs with an initial average body weight (BW) of 6.70 ± 0.34 kg were randomly assigned to one of nine dietary treatments with six replicate pens (three pens were barrows and the other three pens were gilts) per treatment and three pigs per pen. Each pen (1.8 × 2.5 m) was equipped with a single nipple waterer and a one-sided self-feeder (Laien, Animal Husbandry Engineering Co. LTD., Chengdu, China). Pigs were allowed ad libitum access to water and feed. This experiment lasted 28 d. Room temperature initially was set at 28 °C for the first week and gradually reduced to 25 °C by the end of the experiment. Meal diets were formulated to meet or exceed the nutrient recommendation of NRC (2012) for pigs weighing 10–20 kg. The MOS was added to experimental diets by substitution of maize. The contents of crude protein and net energy were equalized by adjusting the proportion of maize and soybean meal in each diet. The compositions of ingredients, and calculated and analyzed nutrients of diets, are presented in Table 2 and Table 3. No medicines or antibiotics were used. The purity of amylose, amylopectin, inulin (the degree of polymerization of 2–60, and an average of 12), cellulose, and MOS was 68.5%, 95%, 85%, 99%, 95%, respectively, and were obtained from Kang Biological Products Co., Ltd. (Chicago, IL, USA), Fuyang Biotechnology Co., Ltd. (Dezhou, China), VILOF Group Co., Ltd. (Beijing, China), Tianli Medical Supplements Co., Ltd. (Qufu, China), Alltech Biological Products Co., Ltd. (Beijing, China), respectively.

Before the experiment began, the experimental diets were sampled once and stored at −20 °C for chemical analysis. Feces were collected on d 24–28 from each pen, added with 10% hydrochloric acid to fix excreta nitrogen after collection, and were dried in a forced-air oven (65 °C) for 72 h. Samples of feed and feces were ground through a 1-mm screen until analyzed for dry matter (DM), crude protein (CP), ether extract (EE), gross energy (GE), crude ash (Ash), and crude fiber (CF). On the 28th day of experiment, one pig with average BW of each pen was selected to obtain blood samples via anterior vena cava before weighing (12 h after feeding). Blood was collected into vacuum tubes without anticoagulant (Kangjian Medical Apparatus Co., Ltd., Taizhou, China), and centrifuged at 3000× g for 15 min to obtain serum, and stored at −80 °C for further analysis. Then the selected pigs were euthanized by intravenous injection of sodium pentobarbital (200 mg/kg BW) according to Chen et al. (2013) [25]. The abdomen was opened to remove the small intestinal segment immediately, the samples from middle sections (4 cm) of duodenum, jejunum, and ileum were collected and stored in 4% paraformaldehyde solution for microscopic measurement of intestinal morphology. This was followed by collecting approximately 4 g digesta from caecum and proximal colon, respectively, kept in sterile tubes and immediately frozen at −80 °C until analysis of SCFA concentrations. Meanwhile, the digesta samples in proximal colon of selected pigs were collected for bacterial community measurement.

The pigs were weighed individually on d 0 and 28 of the experiment and feed intake per pen was measured daily to determine average daily feed intake (ADFI), average daily weight gain (ADG), and the ratio of gain to feed (G:F). Pigs showing liquid feces or loose feces were evaluated as having diarrhea, and the diarrhea of each pen were observed by two observers blinded to treatments at the same time of every morning, noon, and evening for 28 days to determine the number of pigs with diarrhea. The diarrhea incidence was calculated as follows: diarrhea incidence (%) = A/(B × 28 d) × 100, where A = total number of pigs per pen with diarrhea, and B = number of pigs per pen, which was suggested by Zhang et al. (2015) [26].

The contents of blood glucose (Glu), cholesterol (TC), triglycerides (TG), high density lipoprotein-cholesterol (HDL-c), low density lipoprotein-cholesterol (LDL-c) were detected by the commercial kits (Jiancheng Bioengineering Institute, Nanjing, China) with UV-VIS Spectrophotometer (UV1100, MAPADA, Shanghai, China) according to the manufacturer’s instructions. Each parameter was determined in triplicate simultaneously on the same plate. Additionally, the differences among parallels must be small (coefficient of variation was less than 10%) to guarantee the reproducibility of repeated measurements.

The morphology measurements of the villus height (VH) and crypt depth (CD) were conducted according to Touchette et al. (2002) [28]. Briefly, 4-cm of duodenum, jejunum, and ileum were washed with cold sterile saline and fixed with 4% paraformaldehyde solution, and then were dehydrated and embedded in paraffin wax before transverse sections were cut. The preserved samples were stained with hematoxylin and eosin. Twelve well-orientated sections of height villi and their adjoint crypts in each sample were measured with Image Pro Plus software (Version 6.0, Media Cybernetics, Bethesda, MD, USA) at 40× magnification.

Total DNA of each digesta sample was isolated using QIAamp stool DNA Mini kit (QIAGEN, Valencia, CA, USA). The concentration and purity of genomic DNA were detected by NanoDrop ND-2000 Spectrophotometer (NanoDrop, Hilden, Germany). The integrity of genomic DNA was measured using electrophoresis on 1% agarose gels. Sequencing was determined by the Novogene Bioinformatics Technology Co. Ltd. (Beijing, China). DNA library was generated before high-throughput sequencing as previously reported [29]. The library was sequenced on the Illumina HiSeq platform and using 250-bp paired-end reads strategy. The resulting sequences were clustered into operational taxonomic units (OTUs) using USEARCH drive at 97% sequence similarity, and a representative sequence was selected. The relative abundance of each OTU was examined at different taxonomic levels. Species annotation of OTU representative sequences was identified with RDP Classifier method and Green Gene database. The populations of bacterial community in colonic digesta of weaned pigs at the phyla, class, order, family, and genera levels were analyzed by the method of Kruskal–Wallis. The abundances of bacteria at the phylum, class, order, and family levels were shown as bar plots. Log10-transformation was used on the genus relative abundance data matrix for the heatmaps representation, which allowed visualizing differences or similarities between treatments. The Beta diversity of nonmetric multidimensional scaling (NMDS) was analyzed, and the plots were produced by Bray–Curtis distances. The plots were visualized using R software (Package ape).

The sample pretreatment of serum, and cecal and colonic digesta was according to the previous method [30]. The concentrations of SCFAs (acetate, propionate, and butyrate) in serum and digesta of cecum and colon were determined by the gas chromatography system (CP-3800 GC, Varian, Inc., Walnut Creek, CA, USA), and following the instructions described by Franklin et al. (2002) [31].

The GLM models of SAS 9.2 (SAS Institute, Inc., Cary, NC, USA) and Tukey’s tests were used to analyze these experimental data. For data on growth performance and nutrient digestibility, the pen was used as the experimental unit. For other indexes (serum parameters, intestinal morphology, and SCFA concentrations), each pig was regarded as the statistical unit. Moreover, range and three-way ANOVA analyses were performed on growth performance data. The results were presented as means and standard error of the mean (SEM). Statistical significance was considered as p < 0.05 and was considered a trend at 0.05 ≤ p < 0.10.

3.5. SCFA Contents in Serum and Hindgut

In the present study, we identified that the growth performance, nutrient digestibility, microbial community, and SCFA concentrations of weaned pigs were significantly affected by different combinations of starch, NSP, and MOS. Moreover, when the dietary carbohydrates combination was the T6 diet, it could promote the growth performance and nutrient digestibility, increase the abundances of butyrate-producing bacteria, and to some extent improve lipid metabolism of weaned pigs. In summary, we found that the T6 diet (starch AM/AP 1:1, NSP 3% (mixture of inulin with cellulose by 1:1), MOS 400 mg/kg) was the optimal carbohydrates combination for weaned piglets. Importantly, these findings provided a novel way to evaluate the carbohydrate quality of the entire diet for pigs.

This study was supported by National Natural Science Foundation of China (31730091) and the National Key Research and Development Program of China (2017YFD0500503).

All authors declare that they have no competing interest in the present work. 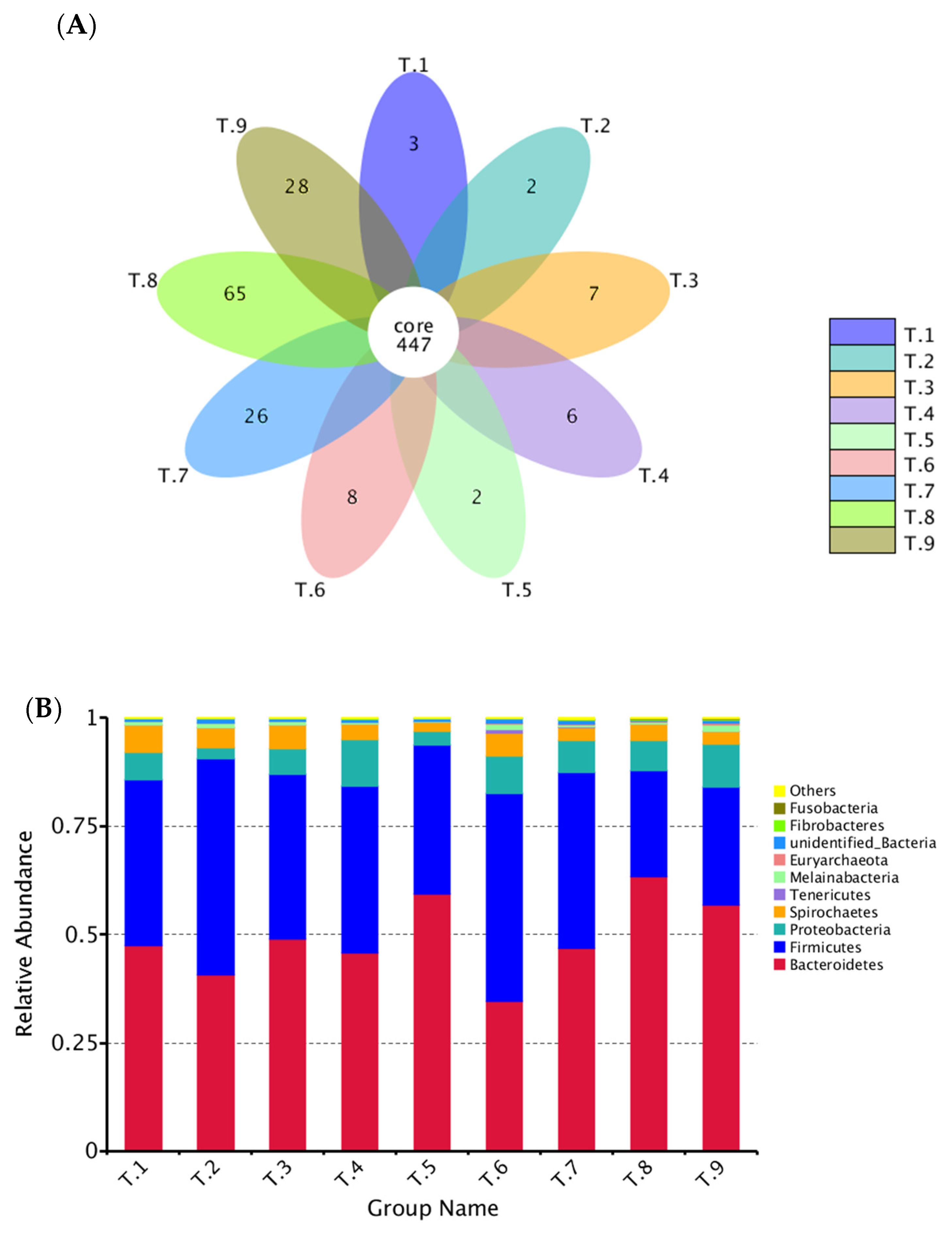 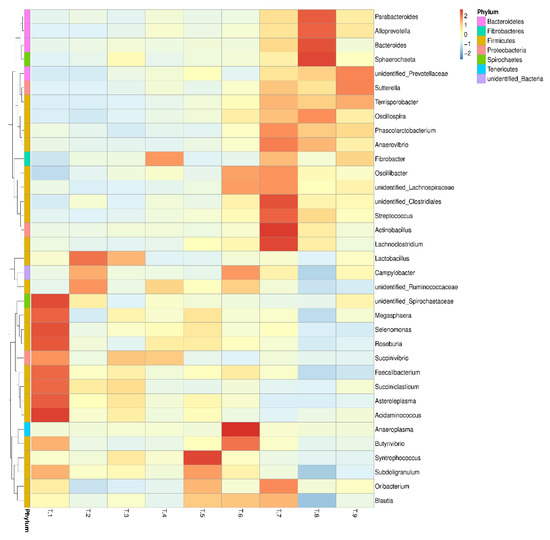 Table 5. The range analysis of the orthogonal experiment.
Table 5. The range analysis of the orthogonal experiment.
BW: body weight; ADFI: average daily feed intake; ADG: average daily gain; G:F: gain to feed. ‡ k is the average value of each experimental factor at the same level and used to evaluate the importance of factors. † R is defined as the range between the maximum and minimum values of k and a large R indicates greater importance of a particular factor. Through comparison of k and R, the optimal level could be decided for every factor.