Malnutrition is a risk factor for developing visceral leishmaniasis and its severe forms. Our group demonstrated that malnourished animals infected with Leishmania infantum had severe atrophies in lymphoid organs and T cell subpopulations as well as altered levels of thymic and splenic chemotactic factors, all of which resulted in dysfunctional lymphoid microenvironments that promoted parasite proliferation. Here, we hypothesize that malnutrition preceding parasite infection leads to structural and immunological changes in the gut mucosae, resulting in a failure in the immune response sensed in the intestine. To evaluate this, we analyzed the immunopathological events resulting from protein malnutrition in the guts of BALB/c mice infected with L. infantum. We observed lymphocytic/lymphoplasmacytic inflammatory infiltrates and lymphoid hyperplasia in the duodenum of well-nourished-infected mice; such alterations were worsened when malnutrition preceded infection. Parasite infection induced a significant increase of duodenal immunoglobulin A (IgA) of well-nourished animals, but those levels were significantly decreased in malnourished-infected mice. In addition, increased levels of Th17-related cytokines in duodenums of malnourished animals supported local inflammation. Together, our results suggest that the gut plays a potential role in responses to L. infantum infection—and that such responses are impaired in malnourished individuals. View Full-Text
Keywords: Leishmania infantum; visceral leishmaniasis; malnutrition; gut; duodenum; inflammation; IgA Leishmania infantum; visceral leishmaniasis; malnutrition; gut; duodenum; inflammation; IgA
►▼ Show Figures 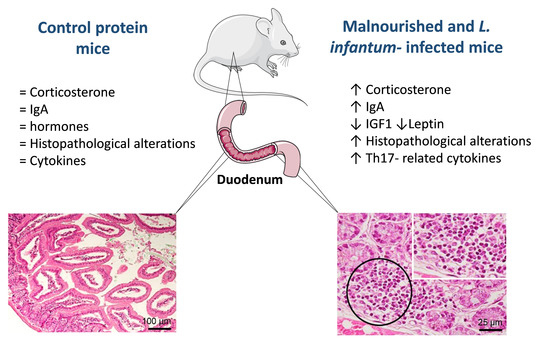