Leishmania, an intracellular parasite species, causes lesions on the skin and in the mucosa and internal organs. The dissemination of infected host cells containing Leishmania is crucial to parasite survival and the establishment of infection. Migratory phenomena and the mechanisms underlying the dissemination of Leishmania-infected human dendritic cells (hDCs) remain poorly understood. The present study aimed to investigate differences among factors involved in hDC migration by comparing infection with visceral leishmaniasis (VL) induced by Leishmaniainfantum with diverse clinical forms of tegumentary leishmaniasis (TL) induced by Leishmaniabraziliensis or Leishmania amazonensis. Following the infection of hDCs by isolates obtained from patients with different clinical forms of Leishmania, the formation of adhesion complexes, actin polymerization, and CCR7 expression were evaluated. We observed increased hDC migration following infection with isolates of L. infantum (VL), as well as disseminated (DL) and diffuse (DCL) forms of cutaneous leishmaniasis (CL) caused by L. braziliensis and L. amazonensis, respectively. Increased expression of proteins involved in adhesion complex formation and actin polymerization, as well as higher CCR7 expression, were seen in hDCs infected with L. infantum, DL and DCL isolates. Together, our results suggest that hDCs play an important role in the dissemination of Leishmania parasites in the vertebrate host. View Full-Text
Keywords: dendritic cell; migration; leishmania sp.; dissemination dendritic cell; migration; leishmania sp.; dissemination
►▼ Show Figures 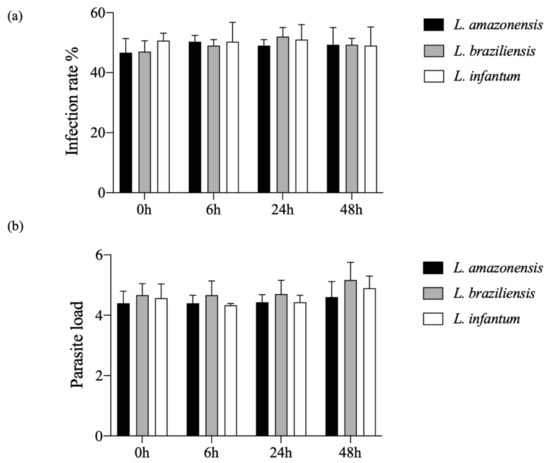