The new genus Morinagamyces is introduced herein to accommodate the fungus Apiosordaria vermicularis as inferred from a phylogenetic study based on sequences of the internal transcribed spacer region (ITS), the nuclear rDNA large subunit (LSU), and partial fragments of ribosomal polymerase II subunit 2 (rpb2) and β-tubulin (tub2) genes. Morinagamyces vermicularis was analyzed for the production of secondary metabolites, resulting in the isolation of a new depsipeptide named morinagadepsin (1), and the already known chaetone B (3). While the planar structure of 1 was elucidated by extensive 1D- and 2D-NMR analysis and high-resolution mass spectrometry, the absolute configuration of the building blocks Ala, Val, and Leu was determined as -l by Marfey’s method. The configuration of the 3-hydroxy-2-methyldecanyl unit was assigned as 22R,23R by J-based configuration analysis and Mosher’s method after partial hydrolysis of the morinagadepsin to the linear derivative compound 2. Compound 1 showed cytotoxic activity against the mammalian cell lines KB3.1 and L929, but no antimicrobial activity against the fungi and bacteria tested was observed, while 2 was inactive. Compound 3 was weakly cytotoxic against the cell line L929, but did not show any antimicrobial activity. View Full-Text
Keywords: cytotoxicity; depsipeptide; Morinagamyces; morinagadepsin; Schizotheciaceae; secondary metabolites; Sordariales cytotoxicity; depsipeptide; Morinagamyces; morinagadepsin; Schizotheciaceae; secondary metabolites; Sordariales
►▼ Show Figures 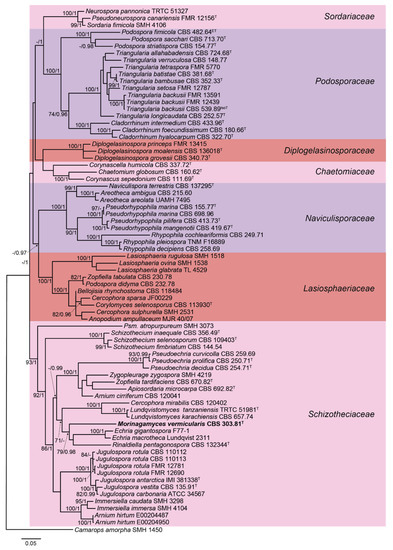