Concerns about safety, applicability and functionality associated with live probiotic cells have led to consideration of the use of non-viable microorganisms, known as paraprobiotics. The present study evaluated the effects of dietary administration of heat-inactivated cells of the probiotic strain Shewanella putrefaciens Ppd11 on the intestinal microbiota and immune gene transcription in Solea senegalensis. Results obtained were evaluated and compared to those described after feeding with viable Pdp11 cells. S. senegalensis specimens were fed with basal (control) diet or supplemented with live or heat inactivated (60 °C, 1 h) probiotics diets for 45 days. Growth improvement was observed in the group receiving live probiotics compared to the control group, but not after feeding with a probiotic heat-inactivated diet. Regarding immune gene transcription, no changes were observed for tnfα, il-6, lys-c1, c7, hsp70, and hsp90aa in the intestinal samples based on the diet. On the contrary, hsp90ab, gp96, cd4, cd8, il-1β, and c3 transcription were modulated after probiotic supplementation, though no differences between viable and heat-inactivated probiotic supplemented diets were observed. Modulation of intestinal microbiota showed remarkable differences based on the viability of the probiotics. Thus, higher diversity in fish fed with live probiotic cells, jointly with increased Mycoplasmataceae and Spirochaetaceae to the detriment of Brevinemataceae, was detected. However, microbiota of fish receiving heat-inactivated probiotic cells showed decreased Mycoplasmataceae and increased Brevinemataceae and Vibrio genus abundance. In short, the results obtained indicate that the viable state of Pdp11 probiotic cells affects growth performance and modulation of S. senegalensis intestinal microbiota. On the contrary, minor changes were detected in the intestinal immune response, being similar for fish receiving both, viable and inactivated probiotic cell supplemented diets, when compared to the control diet. View Full-Text
Keywords: inactivated probiotics; Solea senegalensis; Shewanella putrefaciens Ppd11; immune response; microbiota inactivated probiotics; Solea senegalensis; Shewanella putrefaciens Ppd11; immune response; microbiota
►▼ Show Figures 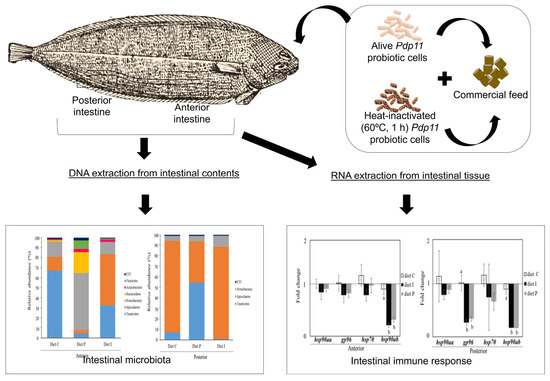