Two distinct isolates of the facultative parasite, Tetrahymena rostrata were compared, identifying and utilising markers that are useful for studying clonal variation within the species were identified and utilised. The sequences of mitochondrial genomes and several nuclear genes were determined using Illumina short read sequencing. The two T. rostrata isolates had similar morphology. The linear mitogenomes had the gene content and organisation typical of the Tetrahymena genus, comprising 8 tRNA genes, 6 ribosomal RNA genes and 45 protein coding sequences (CDS), twenty-two of which had known function. The two isolates had nucleotide identity within common nuclear markers encoded within the histone H3 and H4 and small subunit ribosomal RNA genes and differed by only 2–4 nucleotides in a region of the characterised actin genes. Variation was observed in several mitochondrial genes and was used to determine intraspecies variation and may reflect the natural history of T. rostrata from different hosts or the geographic origins of the isolates. View Full-Text
Keywords: ciliophora; mtSSUrRNA; histone; cytochrome oxidase 1; origin of replication ciliophora; mtSSUrRNA; histone; cytochrome oxidase 1; origin of replication
►▼ Show Figures 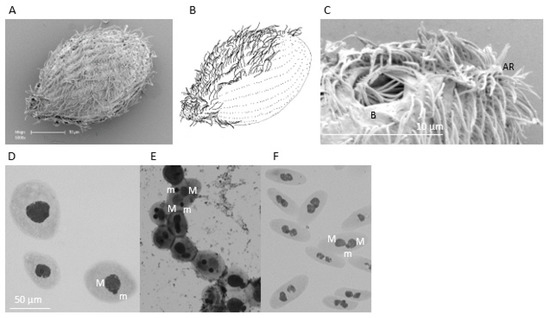