Recent Advances in Understanding, Diagnosing, and Treating Hepatitis B Virus Infection
Next Article in Special Issue

The evolutionary success of insects is promoted by their association with beneficial microbes that enable the utilization of unusual diets. The synanthropic clothing moth Tineola bisselliella provides an intriguing example of this phenomenon. The caterpillars of this species have adapted to feed on keratin-rich diets such as feathers and wool, which cannot be digested by most other animals and are resistant to common digestive enzymes. Inspired by the hypothesis that this ability may be conferred by symbiotic microbes, we utilized a simple assay to detect keratinase activity and a method to screen gut bacteria for candidate enzymes, which were isolated from feather-fed larvae. The isolation of DNA from keratin-degrading bacterial strains followed by de novo genome sequencing resulted in the identification of a novel bacterial strain related to Bacillus sp. FDAARGOS_235. Genome annotation identified 20 genes with keratinase domains. Proteomic analysis of the culture supernatant from this gut bacterium grown in non-nutrient buffer supplemented with feathers revealed several candidate enzymes potentially responsible for keratin degradation, including a thiol-disulfide oxidoreductase and multiple proteases. Our results suggest that the unusual diet of T. bisselliella larvae promotes their association with keratinolytic microorganisms and that the ability of larvae to feed on keratin can at least partially be attributed to bacteria that produce a cocktail of keratin-degrading enzymes. View Full-Text
Keywords: insect biotechnology; beneficial microbes; symbiosis; keratin; dietary adaptation; Tineola bisselliella insect biotechnology; beneficial microbes; symbiosis; keratin; dietary adaptation; Tineola bisselliella
►▼ Show Figures 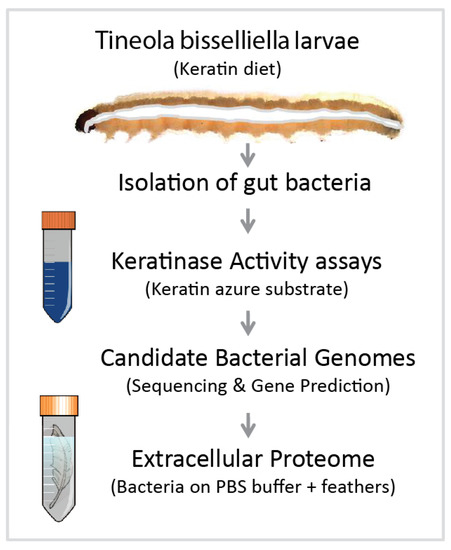