Lactic Acid Bacteria as Antibacterial Agents to Extend the Shelf Life of Fresh and Minimally Processed Fruits and Vegetables: Quality and Safety Aspects
Next Article in Special Issue

Microbial communities have inherently high levels of metabolic flexibility and functional redundancy, yet the structure of microbial communities can change rapidly with environmental perturbation. To understand whether such changes observed at the taxonomic level translate into differences at the functional level, we analyzed the structure of taxonomic and functional gene distribution across Arctic and Antarctic locations. Taxonomic diversity (in terms of alpha diversity and species richness) differed significantly with location. However, we found that functional genes distributed evenly across bacterial networks and that this functional distribution was also even across different geographic locations. For example, on average 15% of the functional genes were related to carbon cycling across all bacterial networks, slightly over 21% of the genes were stress-related and only 0.5% of the genes were linked to carbon degradation functions. In such a distribution, each bacterial network includes all of the functional groups distributed following the same proportions. However, the total number of functional genes that is included in each bacterial network differs, with some clusters including many more genes than others. We found that the proportion of times a specific gene must occur to be linked to a specific cluster is 8%, meaning the relationship between the total number of genes in the cluster and the number of genes per function follows a linear pattern: smaller clusters require a gene to appear less frequently to get fixed within the cluster, while larger clusters require higher gene frequencies. We suggest that this mechanism of functional association between equally rare or equally abundant genes could have implications for ecological resilience, as non-dominant genes also associate in fully functioning ecological networks, potentially suggesting that there are always pre-existing functional networks available to exploit new ecological niches (where they can become dominant) as they emerge; for example, in the case of rapid or sudden environmental change. Furthermore, this pattern did not correlate with taxonomic distribution, suggesting that bacteria associate based on functionality and this is independent of its taxonomic position. Our analyses based on ecological networks also showed no clear evidence of recent environmental impact on polar marine microbial communities at the functional level, unless all communities analyzed have changed exactly in the same direction and intensity, which is unlikely given we are comparing areas changing at different rates. View Full-Text
Keywords: resilience; functional diversity; redundancy; Antarctic bacteria; stability resilience; functional diversity; redundancy; Antarctic bacteria; stability
►▼ Show Figures 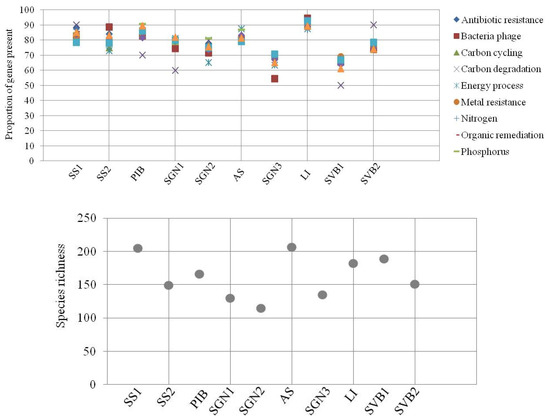