Rhizospheric and endophytic microbiota have been shown to significantly improve plant health and development [1,2]. Beneficial microorganisms in the rhizosphere/roots of bananas have been investigated for potential beneficial impacts [3]. Both roots as well as the thin soil layer adhering to roots, called rhizosphere, host diverse microbial communities. To date, however, most research has focused on only a small fraction of a pre-targeted group of the rhizosphere microbiota. Hence information is missing of the entire associated microbial diversity and influencing factors.
Bananas (Musaceae spp.) are cultivated throughout the humid tropics and sub-tropics. In sub-Saharan Africa (SSA), bananas are an important component of the diet and a crucial source of income for many small holder farmers. Disease pressure is the major threat threatening banana productivity in the region [4,5,6]. The devastation of bananas by Panama disease caused by the soil borne Fusarium oxysporum f. sp. cubense (Foc), lack of pesticides, and appropriate resistant varieties encouraged the search for alternatives to sustain productivity. Foc race 1 is present everywhere in SSA hampering dessert banana (of the Musa subgroup AAB) productivity [7]. In addition, Foc race 4 is present in Mozambique [3]. The pathogen can spread from infected to non-infected fields through banana suckers, water, and movement of people. Foc enters through the roots and infects the plant vascular system. Initial disease expression is yellowing of leaves. In later stages, maroon color lines appear inside the pseudostem. To date, no effective control exists against this devastating disease, and the pathogen can persist in the soil for decades without a suitable host. In this context, and since Foc is soil borne, the study of host-microbiome interactions and defense against phytopathogens might open new ways to improve banana growth and yield [8,9]. Endophytes isolated from banana suckers exhibit a significant antagonistic activity against phytopathogens and should be explored as self-supporting microbial ecosystems [10]. The advent of high-throughput sequencing technologies allows the systematic study of plant-associated microbial communities [11,12]. However, there are gaps to be resolved between plant–microbe interactions and their underlying mechanisms [13,14] in support of enhanced production.
To elucidate the role of the microbiome in plant growth and disease control, it is necessary to investigate the microbiome dynamics and distribution in different plant components. Thus, the present investigation was conducted to study the microbiome (both bacteria and fungi) structure and mode of associations with asymptomatic and symptomatic banana plants infected by Fusarium oxysporum f. sp. cubense (Foc) race 1. Symptomatic banana plants were selected based on the morphological symptoms including yellow coloration of leaves and maroon color lines inside the pseudostem. In addition, we demonstrated the composition and assemblage of the naturally occurring microbiome in the rhizosphere, root, and corm samples. Our study is the first to describe an inventory of bacterial and fungal communities associated with the components of asymptomatic and symptomatic banana plants infected by Foc. In addition, we describe core microbiomes in the rhizosphere, root, and corm and established a model for studying banana microbiota.

Sukari Ndizi (Musa subgroup AAB) is a popular dessert banana cultivar in east Africa that is susceptible to Foc. The rhizosphere, roots, and corm of asymptomatic and symptomatic plants were targeted for sampling. Symptomatic banana plants exhibited yellowing leaves with brown streak discoloration inside the pseudostem and corm, and asymptomatic plants had green leaves with no discoloration inside the pseudostem and corm (Figure 1). Samples were collected from three random locations around a single plant at a distance of 15 cm. Rhizosphere samples were composed of soil attached to roots at a depth of 15–30 cm. Root samples were collected at the same depth after the removal of attached soil. Corm samples were collected from a depth of 15–50 cm and included the outer 2–3 cm of the cortex. Each composite sample was made from five different plants from four independent fields (a total of 20 plants). A total of 12 composite samples were collected from two locations in Tanzania, i.e., Arusha (3°22′29.6″S, 36°48′16.8″E) and Kilimanjaro (3°14′14.6″S, 37°15′03.7″E) (Figure S1). Samples were put in polythene bags and kept in an ice-cold box until transported to the laboratory. In the laboratory samples were further kept at 4 °C until processed. DNA was extracted using the Plant and Soil DNA Isolation Kit (Zymo Research Corp., Irvine, CA, USA).

The V3–V4 hyper-variable region of the 16S rDNA gene of bacteria and archaea and internal transcribed spacer (ITS2) of fungi was amplified (Table S2). Amplification was done with i5 and i7 primers as per the standard Illumina protocol [15]. The amplicon library was prepared by Nextera XT Index Kit (Illumina Inc.) as per the 16S Metagenomic Sequencing Library preparation protocol. The amplicon libraries were purified by 1X AMpureXP beads, checked on Agilent DNA1000 chip on Bioanalyzer2100 and quantified by Qubit Fluorometer 2.0 using Qubit dsDNA HS Assay kit (Life Technologies).

2.4. Data Processing and OTU Clustering of 16S and ITS2 Amplicons

DNA (chimeras) sequences were filtered using usearch61 algorithm (de novo mode) and generated in silico using the FLASH tool with a minimum 10 bp overlap to recreate the V3–V4 region. All the samples were pooled in a single file, processed, and clustered to facilitate resemblance among different plant components and locations. The taxonomic names were assigned with UCLUST algorithm. OTUs for bacterial and fungal communities correlated with their abundances, were organized into a BIOM file. QIIME was used for downstream processing and intra-sample analysis or Alpha (α) and Beta (β) diversity calculations to analyze species richness. We used non-metric multidimensional scaling (NMDS) and principal coordinate analysis (PCoA) plots to visualize differences in bacterial and fungal communities composition among samples.

Differences in microbial community richness among rhizosphere, root, and corm of banana were evaluated with chaos1 estimator and the Shannon diversity index. The Bray–Curtis dissimilarity matrix was calculated for bacterial and fungal communities and used for PCoA analysis with QIIME.

We investigated core and non-core microbial communities (both for bacteria and fungi) in combination of sample type and location with MySQL query over the filtered OTU table. Further, we evaluated the relative abundance of each OTU in different samples and taxonomical histograms were plotted.

The sequence data were deposited in NCBI with SRA accession PRJNA493905 and PRJNA494050.

We analyzed the genera for plant growth promoting attributes from our identified core bacterial and fungal communities with already demonstrated genera in literature. From our core bacterial and fungal communities, 129 bacterial and 37 fungal genera could be assigned to known taxa. Among these, 15 bacterial and four fungal genera were associated with plant growth promoting traits, including Bacillus, Pseudomonas, and Trichoderma (Tables S2 and S3) plants. Other bacteria found in the rhizosphere and roots included Bradyrhizobium, Mesorhizobium, Phyllobacterium, Rhizobium, and Azospirillum that are known for biological nitrogen fixation; Bacillus, Paenibacillus, Pseudomonas, and Variovorax known to produce indole acetic acid (IAA) that is associated with promoting plant growth. The rhizosphere and root samples also included fungi belonging to Aspergillus and Trichoderma, which are known for their biocontrol attributes. Bacterial communities such as Pseudomonadaceae, which were supposed to be in high relative abundance in rhizosphere, root, and corm, have been poorly explored with respect to their plant growth promoting attributes in bananas. Other groups such as Hyphomicrobiaceae and Sphingomonadaceae have never been explored for their plant growth promoting traits. Regarding fungal communities, Trichoderma was among the highly abundant groups identified in the rhizosphere, root, and corm whose plant growth traits are known. More than 92.8% of bacterial groups that were identified have never been explored. In the case of fungal communities, very few genera (<1%) have been explored from any host plant (Figure 8). 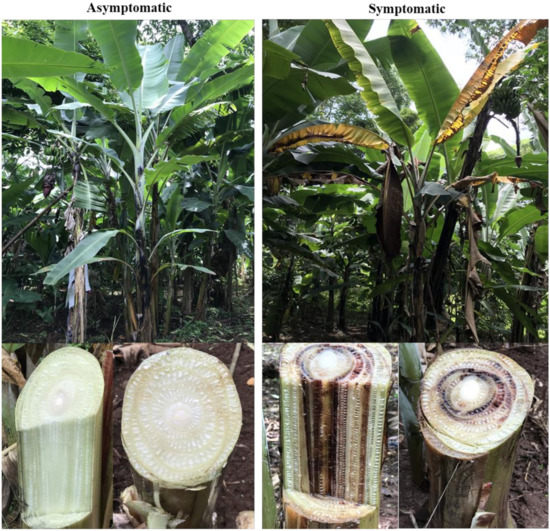 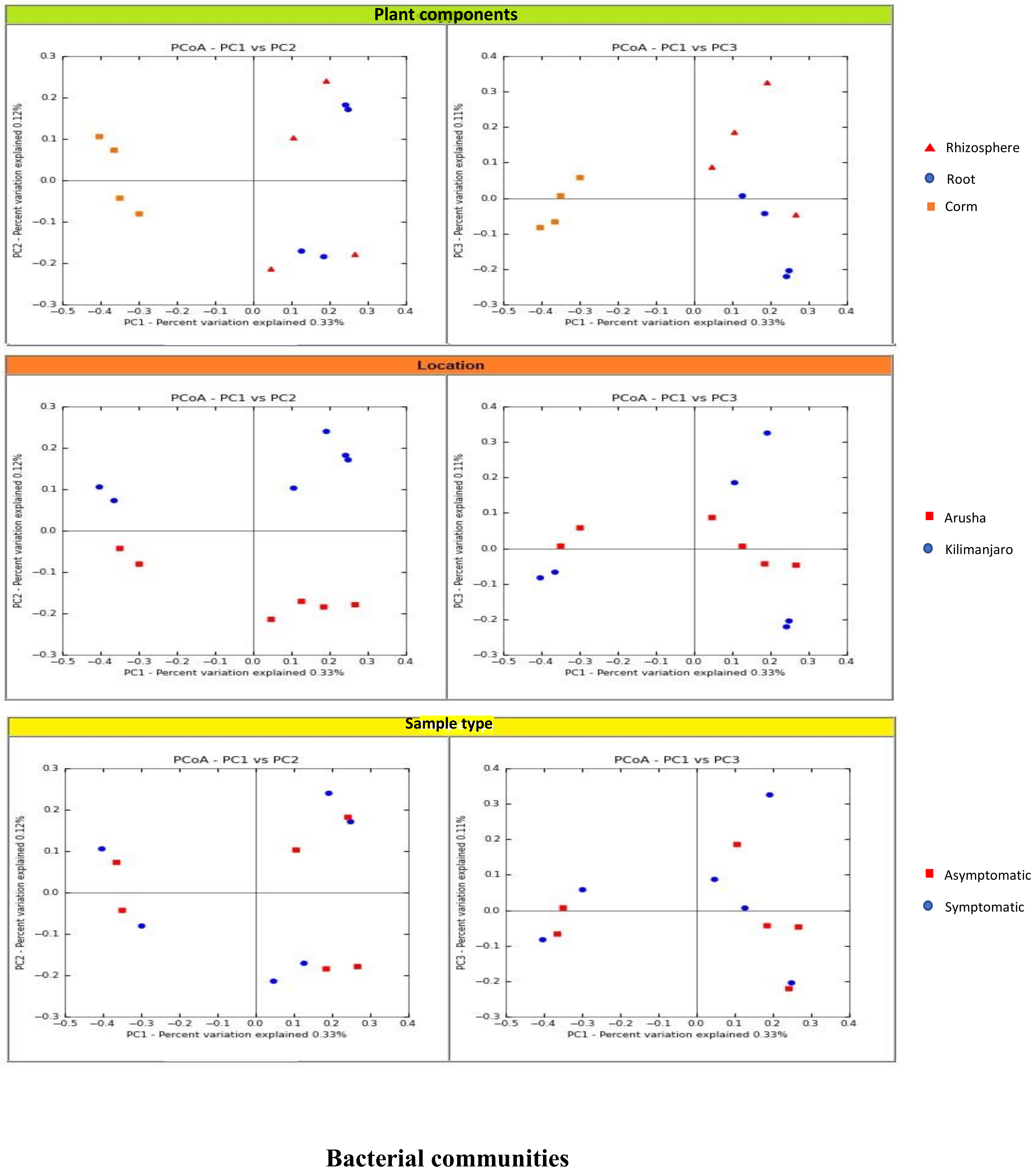 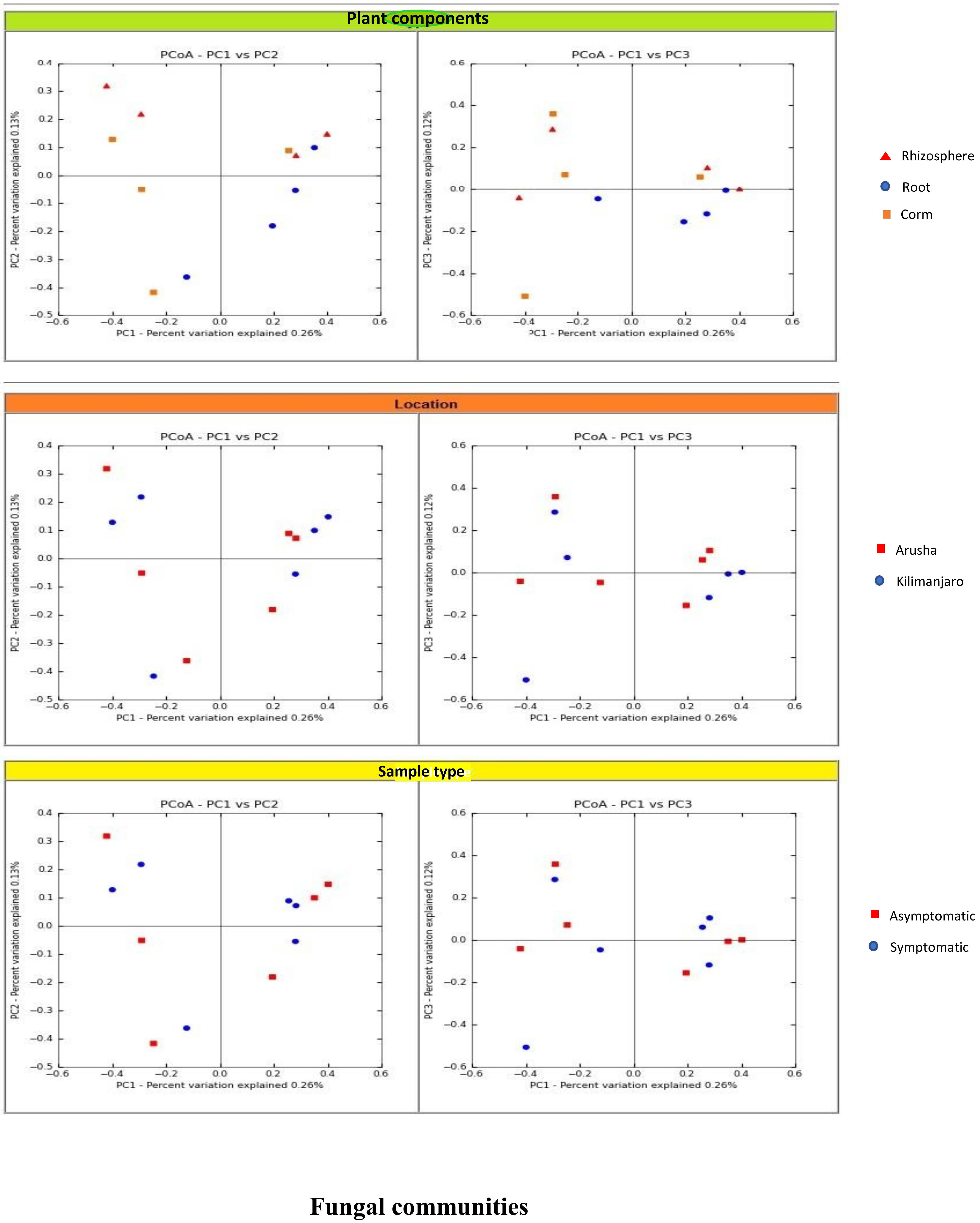 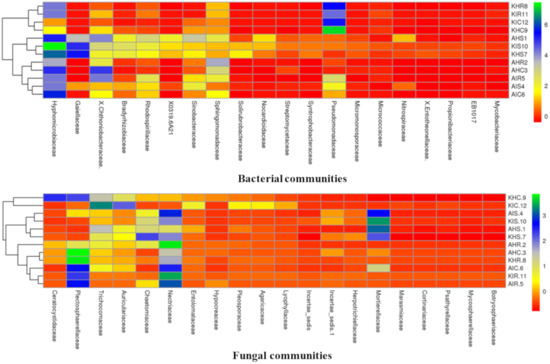 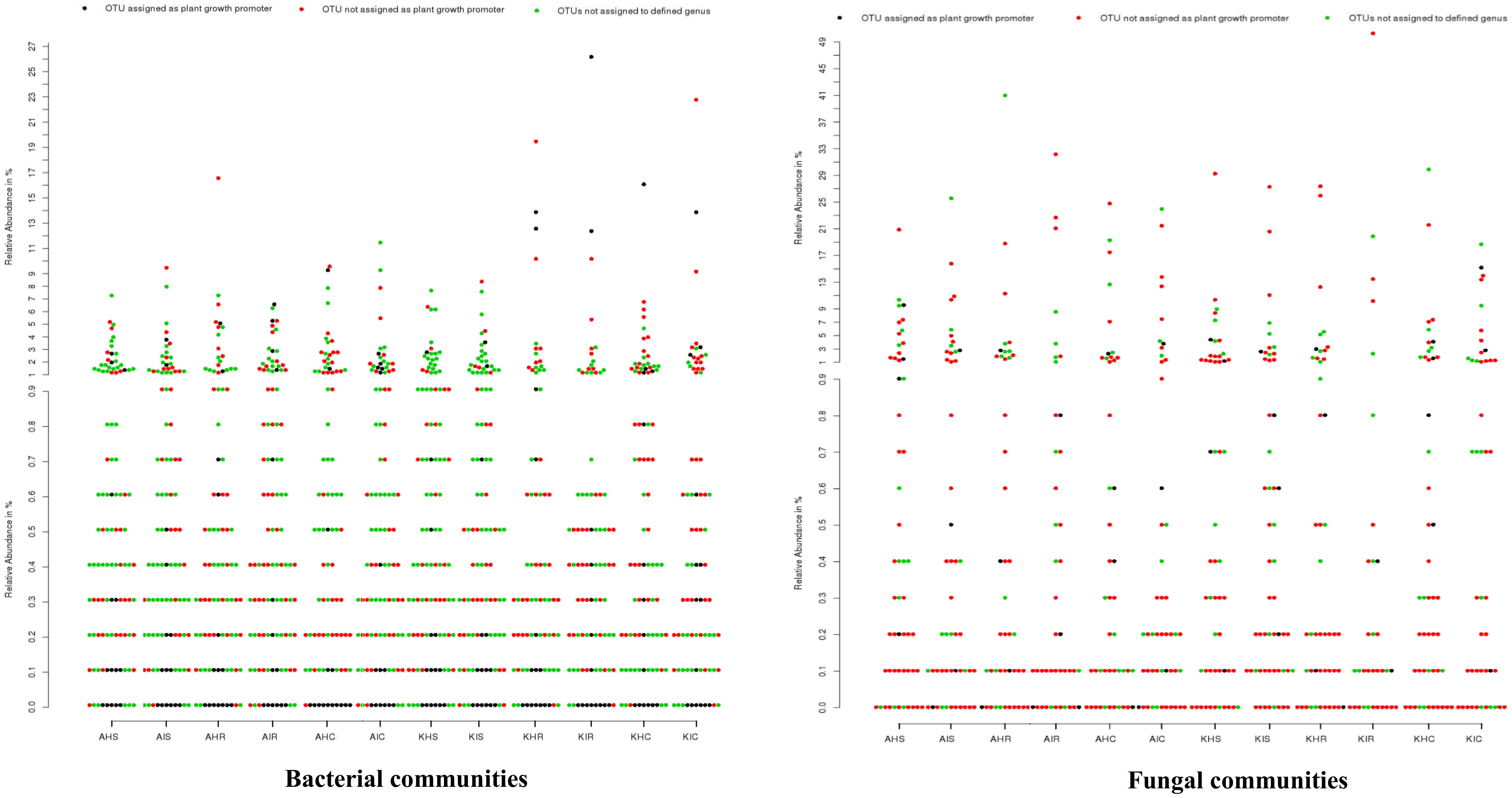