Zinc has been very efficacious in reducing post-weaning diarrhea, whereas animal-derived peptides are suggested to improve the growth performance of weaned piglets. However, the combined effect of zinc and peptides on swine production and swine gut microbiota is still largely unknown. In this study, we followed 288 nursery pigs from the age of d30 to d60 to evaluate the growth performance and gut microbiota of weanling pigs subjected to different levels of a fish-porcine-microbial peptide cocktail (0.05%, 0.25%, and 0.5%) with or without the pharmaceutical level of zinc oxide (ZnO) (2500 ppm) supplementation in a nutrient-deficient diet. Rectal swab samples were collected from pigs with body weight (BW) approach average at each pen on d30, d42, and d60 to determine gut microbiota. Average daily gain (ADG) and BW in piglets fed high zinc (HZ) increased with increasing levels of peptide. The microbiota of the HZ group also diverged from those of the standard zinc (SZ) group from d30 to d60. Adding peptide did not alter community structure regardless of zinc supplementation. Collectively, these findings demonstrated that the pharmaceutical level of zinc as ZnO conditioned the gut community to the point where peptide could effectively restore growth performance in nursery pigs fed nutrient-deficient diets. View Full-Text
Keywords: nursery pigs; gut microbiota; growth performance; peptide cocktail; ZnO nursery pigs; gut microbiota; growth performance; peptide cocktail; ZnO
►▼ Show Figures 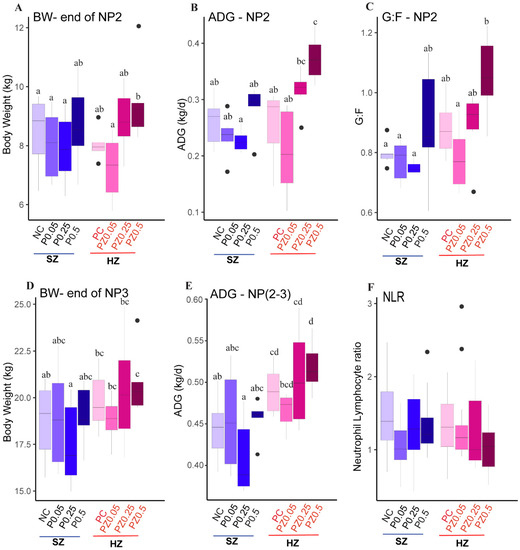