Phylogeography of 27,000 SARS-CoV-2 Genomes: Europe as the Major Source of the COVID-19 Pandemic

The novel coronavirus SARS-CoV-2 emerged from a zoonotic transmission in China towards the end of 2019, rapidly leading to a global pandemic on a scale not seen for a century. In order to cast fresh light on the spread of the virus and on the effectiveness of the containment measures adopted globally, we used 26,869 SARS-CoV-2 genomes to build a phylogeny with 20,247 mutation events and adopted a phylogeographic approach. We confirmed that the phylogeny pinpoints China as the origin of the pandemic with major founders worldwide, mainly during January 2020. However, a single specific East Asian founder underwent massive radiation in Europe and became the main actor of the subsequent spread worldwide during March 2020. This lineage accounts for the great majority of cases detected globally and even spread back to the source in East Asia. Despite an East Asian source, therefore, the global pandemic was mainly fueled by its expansion across and out of Europe. It seems likely that travel bans established throughout the world in the second half of March helped to decrease the number of intercontinental exchanges, particularly from mainland China, but were less effective between Europe and North America where exchanges in both directions are visible up to April, long after bans were imposed.
Keywords: phylogeography; phylogenomics; molecular epidemiology; travel bans; intercontinental founders; SARS-COV-2 lineages phylogeography; phylogenomics; molecular epidemiology; travel bans; intercontinental founders; SARS-COV-2 lineages

Towards the end of 2019, a novel virus jumped species from an unidentified host to humans, associated with an outbreak of pneumonia [1]. This is thought most likely to have taken place in the Huanan live animal and seafood “wet market” of Wuhan, China, although problems with this scenario have fueled alternatives [2]. This virus, identified as a member of the coronavirus family, showed evolutionary proximity to viruses found in bats [3,4], a known natural reservoir of coronaviruses [5,6,7], and also pangolins [8]. The novel virus, named SARS-CoV-2, is a positive single-stranded RNA beta-coronavirus with a genome 29,903 nucleotides long [9].
SARS-CoV-2 causes severe acute respiratory disease in humans, known as coronavirus disease 2019 (COVID-19), which may also include gastrointestinal and neurological symptoms [10,11,12,13,14]. The virus has spread dramatically [10]; in three to four months, it was officially detected in at least 200 countries, causing a global pandemic with around 22 million infected individuals and more than 1,000,000 deaths (as of 29/09/20; source: World Health Organization), a scale not seen in the last 100 years.
Traditional evolutionary approaches have been applied to study the phylogeny of SARS-CoV-2. These are, in particular, maintained and updated on the GISAID website [15]. However, the similarity of variation in SARS-CoV-2 to variation in the human mitochondrial DNA (mtDNA) genome has also been noted on several occasions, leading to several attempts to use the tools of human mitochondrial intraspecific phylogeography to track the spread of the virus. The first of these, published in April 2020, used just 160 genomes [16], whilst another, for which a preprint was posted in June 2020 [17], and subsequently published [18], included ~4700, albeit focusing on ~3400 higher-quality sequences.
The first study [16] was undeniably pioneering, especially in its application of phylogeographic principles [19] to the spread of the pandemic but received criticism for relying upon a widely used but very weak network reconstruction algorithm, as well as the small dataset [20,21]. The median-joining (MJ) algorithm [22]—a fast, heuristic approach designed primarily to graphically display the variation in hypervariable human microsatellite data—is poorly suited to the task of phylogenetic reconstruction, and fails especially to correctly reconstruct long branches that particularly affect the identification of the root [21,23]. Although a more precise phylogenetic reconstruction is considerably more challenging and labor-intensive, MJ does not provide a reliable short-cut, and at minimum should be combined with a pre-processing step using the reduced-median network algorithm, as recommended by its originators [22]. Other studies currently available only as preprints have also adopted the MJ approach, e.g., Song et al. [24].
A more recent study [18] applies a more sophisticated approach to a much larger dataset, using both maximum parsimony and maximum likelihood, including a thorough analysis of rate variation across the genome. They pinpointed the arrival of the virus in its first human host with striking precision to November 12th, 2019. Nevertheless, this study still struggled to identify the root of the phylogeny and focused primarily on the specific issue of the impact of super-spreaders [25] during the course of the pandemic.
Here, we analyzed almost an order of magnitude more sequences than this most recent study and applied novel methodologies to establish a more confident identification of the root. Like the previous studies referred to above, we co-opted approaches from human intraspecific phylogeography, as applied in the past, especially to mitochondrial DNA. In particular, we used the reduced-median (RM) network algorithm [26] to generate the phylogeny. The RM algorithm explicitly reconstructs ancestral nodes in the phylogeny as median vectors, of which MJ only achieves a small subset [22,26]. The RM algorithm was explicitly developed for intraspecific human mtDNA variation [26] and as such is highly appropriate because the variation in SARS-CoV-2 genomes is strikingly similar to that in whole mitochondrial genomes. The number of viral genomes that we analyzed (~27,800) was similar to the publicly available mitochondrial genome database (PhyloTree) [27].
In our study, we highlighted a major feature of the spread of the virus to which phylogeographic analysis was uniquely suited and to which the study of mitochondrial genomes has made important contributions in the past. This is the extent and impact of founder effects on the dispersal of the virus around the human populations of the world. Furthermore, highlighting intercontinental dispersals of the various virus lineages allowed us to comment on the effectiveness of the early travel restrictions implemented by some countries.

This work was supported by strategic project ICVS/3B’s (UID/Multi/50025), financed by Fundação para a Ciência e Tecnologia/MCTES through national funds (PIDDAC) to Teresa Rito. Martin B. Richards and Maria Pala received support from a Leverhulme Doctoral Scholarship program. This work was partially supported by project NORTE-01-0145-FEDER000009) by Norte Portugal Regional Operational Program (NORTE 2020), under the PORTUGAL 2020 Partnership Agreement, through the European Regional Development Fund (ERDF) and by “Contrato-Programa” UIDB/04050/2020 funded by Portuguese national funds through the Fundação para a Ciência e Tecnologia to Pedro A. Soares. 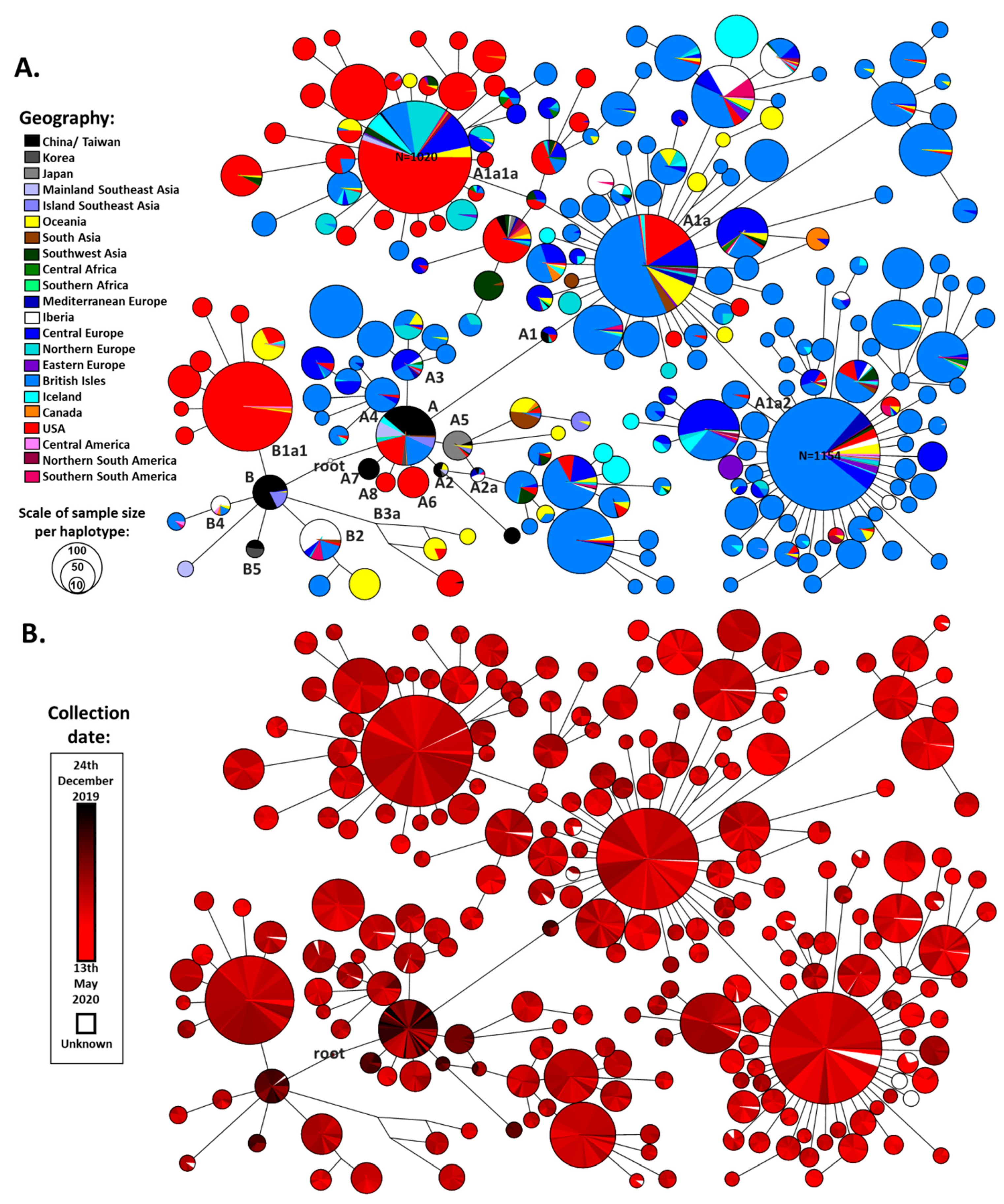