In this work, the viability of bioaccumulation and bioextraction processes for arsenic removal from contaminated waters, as well as the recycling of arsenate-treated amorphous ferric oxyhydroxide adsorbent (FeOOH) were evaluated using the common soil microscopic filamentous fungus Aspergillus niger. After treating the contaminated arsenate solution (100 mg As L−1) with FeOOH, the remaining solution was exposed to the growing fungus during a static 19-day cultivation period to further decrease the arsenic concentration. Our data indicated that although the FeOOH adsorbent is suitable for arsenate removal with up to 84% removal efficiency, the fungus was capable of accumulating only up to 13.2% of the remaining arsenic from the culture media. This shows that the fungus A. niger, although highly praised for its application in environmental biotechnology research, was insufficient for decreasing the arsenic contamination to an environmentally acceptable level. However, the bioextraction of arsenic from arsenate-treated FeOOH proved relatively effective for reuse of the adsorbent. Due to its production of acidic metabolites, which decreased pH below 2.7, the fungal strain was capable of removing of up to 98.2% of arsenic from the arsenate-treated FeOOH adsorbent. View Full-Text
Keywords: arsenic; bioaccumulation; bioextraction; ferric oxyhydroxides; filamentous fungi arsenic; bioaccumulation; bioextraction; ferric oxyhydroxides; filamentous fungi
►▼ Show Figures 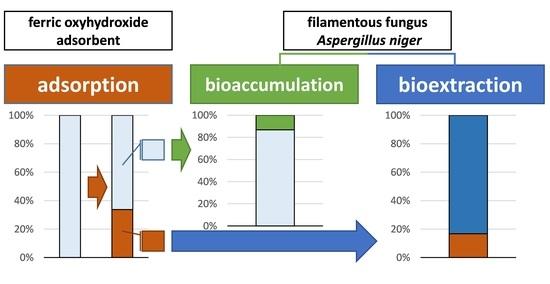