Genome Analysis of a Marine Bacterium Halomonas sp. and Its Role in Nitrate Reduction under the Influence of Photoelectrons
Previous Article in Special Issue

To B or Not to B: Mechanisms of Protection Conferred by rVSV-EBOV-GP and the Roles of Innate and Adaptive Immunity

Lloviu virus (LLOV), a bat-derived filovirus that is phylogenetically distinct from human pathogenic filoviruses such as Ebola virus (EBOV) and Marburg virus (MARV), was discovered in Europe. However, since infectious LLOV has never been isolated, the biological properties of this virus remain poorly understood. We found that vesicular stomatitis virus (VSV) pseudotyped with the glycoprotein (GP) of LLOV (VSV–LLOV) showed higher infectivity in one bat (Miniopterus sp.)-derived cell line than in the other bat-derived cell lines tested, which was distinct from the tropism of VSV pseudotyped with EBOV (VSV–EBOV) and MARV GPs. We then focused on the interaction between GP and Niemann–Pick C1 (NPC1) protein, one of the cellular receptors of filoviruses. We introduced the Miniopterus bat and human NPC1 genes into NPC1-knockout Vero E6 cells and their susceptibilities to the viruses were compared. The cell line expressing the bat NPC1 showed higher susceptibility to VSV–LLOV than that expressing human NPC1, whereas the opposite preference was seen for VSV–EBOV. Using a site-directed mutagenesis approach, amino acid residues involved in the differential tropism were identified in the NPC1 and GP molecules. Our results suggest that the interaction between GP and NPC1 is an important factor in the tropism of LLOV to a particular bat species. View Full-Text
Keywords: filovirus; lloviu virus; Miniopterus sp.; bat; insectivorous bat; host range; Niemann–Pick C1; glycoprotein filovirus; lloviu virus; Miniopterus sp.; bat; insectivorous bat; host range; Niemann–Pick C1; glycoprotein
►▼ Show Figures 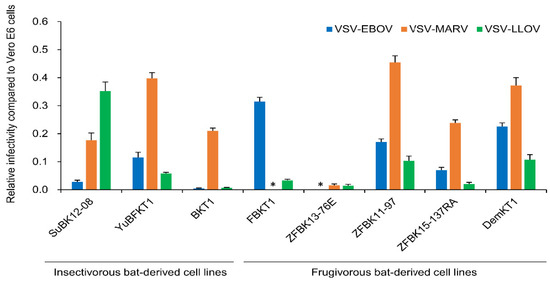