Reuterin is a broad-spectrum antimicrobial system produced by specific strains of Lactobacillus reuteri during anaerobic metabolism of glycerol. Acrolein is the main component responsible for its antimicrobial activity. Here, the sensitivity of Campylobacter jejuni (n = 51) and Campylobacter coli (n = 20) isolates from chicken meat and human stool samples to reuterin was investigated. The minimum inhibitory concentration (MIC) of C. jejuni and C. coli strains was measured between 1.5 and 3.0 µM of acrolein, below the MIC of the sensitive indicator strain Escherichia coli K12 (16.5 µM acrolein). The interaction of C. jejuni N16-1419 and the reuterin-producing L. reuteri PTA5_F13 was studied during 24 h co-cultures with or without glycerol. A high C. jejuni growth was observed in cultures without glycerol. In contrast, C. jejuni growth decreased from 7.3 ± 0.1 log CFU/mL to below detection limit (1 log CFU/mL) during co-cultures added with 28 mM glycerol. This bactericidal effect could be attributed to in situ reuterin production. The low MIC observed and the high sensitivity towards in situ produced reuterin suggests L. reuteri combined with glycerol, as a possible intervention option to reduce Campylobacter in the food chain. View Full-Text
Keywords: Acrolein; reuterin; antimicrobial; Lactobacillus reuteri; Campylobacter Acrolein; reuterin; antimicrobial; Lactobacillus reuteri; Campylobacter
►▼ Show Figures 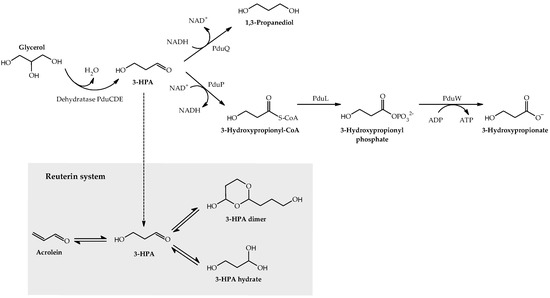