Biofilms are surface-associated microbial communities resistant to sanitizers and antimicrobials. Various interactions that can contribute to increased resistance occur between the populations in biofilms. These relationships are the focus of a range of studies dealing with biofilm-associated infections and food spoilage. The present study investigated the effects of cinnamon (Cinnamomum zeylanicum), marjoram (Origanum majorana), and thyme (Thymus vulgaris) essential oils (EOs) and their main components, i.e., trans-cinnamaldehyde, terpinen-4-ol, and thymol, respectively, on single- and dual-species biofilms of Escherichia coli, Listeria monocytogenes, Pseudomonas putida, and Staphylococcus aureus. In dual-species biofilms, L. monocytogenes was paired with each of the other three bacteria. Minimum inhibitory concentration (MIC) values for the individual bacteria ranged between 0.25 and 20 mg/mL, and trans-cinnamaldehyde and cinnamon showed the highest growth inhibitory effect. Single-species biofilms of L. monocytogenes, P. putida, and S. aureus were inhibited by the tested EOs and their components at sub-lethal concentrations. Scanning electron microscopy images showed that the three-dimensional structure of mature biofilms embedded in the exopolysaccharide matrix disappeared or was limited to micro-colonies with a simplified structure. In most dual-species biofilms, to eliminate living cells from the matrix, concentrations exceeding the MIC determined for individual bacteria were required. View Full-Text
Keywords: antibacterial activity; biofilm; polymicrobial biofilm; essential oil; food spoilage antibacterial activity; biofilm; polymicrobial biofilm; essential oil; food spoilage
►▼ Show Figures 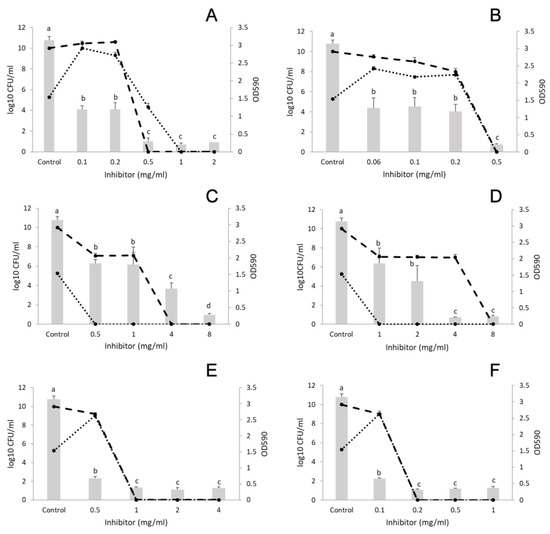