Malaria in North-East India: Importance and Implications in the Era of Elimination
Previous Article in Journal

Isolation and Molecular Typing of Leishmania infantum from Phlebotomus perfiliewi in a Re-Emerging Focus of Leishmaniasis, Northeastern Italy

Visceral leishmaniasis (VL) caused by Leishmania (L.) infantum is a public health threat in the Emilia-Romagna region, northeastern Italy, but its epidemiology has not been fully elucidated in this area. The objective of this study was to characterize Leishmania infection in sand flies collected in a re-emerging focus of VL in the Bologna province. During the summer of 2016, 6114 sand flies were collected, identified, and tested for Leishmania detection. Of the identified sand flies, 96.5% were Phlebotomus (P.) perfiliewi and 3.5% were P. perniciosus. Detected parasites were characterized by biomolecular methods (multilocus microsatellite typing and characterization of repetitive region on chromosome 31), and quantified by real-time PCR. The prevalence of Leishmania infection in individually-tested P. perfiliewi sand flies varied from 6% to 10% with an increasing trend during the season. Promastigotes of L. infantum were isolated by dissection in one P. perfiliewi female; the isolated strain (Lein-pw) were closely related to Leishmania parasites from VL cases in northeastern Italy, but differed from strains isolated in dogs from the same area. Our findings strongly support the vector status of P. perfiliewi for human VL in the study area. View Full-Text
Keywords: Leishmania infantum; Phlebotomus perfiliewi; Phlebotomus perniciosus; visceral leishmaniasis; molecular typing; parasite load; quantitative PCR Leishmania infantum; Phlebotomus perfiliewi; Phlebotomus perniciosus; visceral leishmaniasis; molecular typing; parasite load; quantitative PCR
►▼ Show Figures 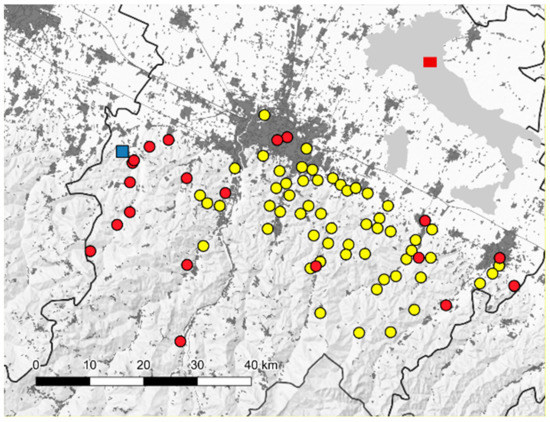