What Happens in the Staphylococcal Nucleoid under Oxidative Stress?
Previous Article in Journal

A Comparison of Constitutive and Inducible Non-Endogenous Keto-Carotenoids Biosynthesis in Synechocystis sp. PCC 6803

A novel mediatorless photo-bioelectrochemical sensor operated with a biofilm of the cyanobacterium Synechocystis PCC6803 wt. for herbicide detection with long term stability (>20 days) was successfully developed and tested. Photoanodic current generation was obtained in the absence of artificial mediators. The inhibitory effect on photocurrent of three commonly used herbicides (i.e., atrazine, diuron, and paraquat) was used as a means of measuring their concentrations in aqueous solution. The injection of atrazine and diuron into the algal medium caused an immediate photocurrent drop due to the inhibition of photosynthetic electron transport. The detected concentrations were suitable for environmental analysis, as revealed by a comparison with the freshwater quality benchmarks set by the Environmental Protection Agency of the United States (US EPA). In contrast, paraquat caused an initial increase (~2 h) of the photocurrent effect of about 200%, as this compound can act as a redox mediator between the cells and the anode. A relatively long-term stability of the biosensor was demonstrated, by keeping anodes colonized with cyanobacterial biofilm in the dark at 4 °C. After 22 days of storage, the performance in terms of the photocurrent was comparable with the freshly prepared biosensor. This result was confirmed by the measurement of chlorophyll content, which demonstrated preservation of the cyanobacterial biofilm. The capacity of this biosensor to recover after a cold season or other prolonged environmental stresses could be a key advantage in field applications, such as in water bodies and agriculture. This study is a step forward in the biotechnological development and implementation of storable mediatorless electrochemical biosensors for herbicide detection. View Full-Text
Keywords: mediatorless; amperometric biosensor; herbicide; atrazine; diuron; paraquat; photocurrent inhibition mediatorless; amperometric biosensor; herbicide; atrazine; diuron; paraquat; photocurrent inhibition
►▼ Show Figures 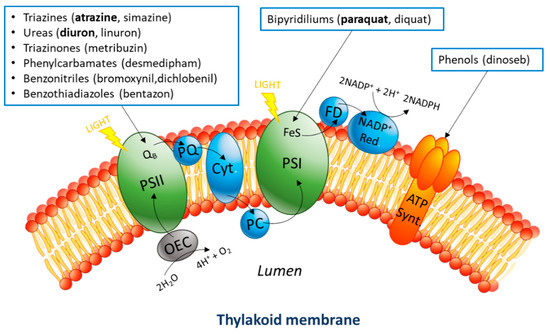