Multifunctionalities linked with the microbial communities associated with the millet crop rhizosphere has remained unexplored. In this study, we are analyzing microbial communities inhabiting rhizosphere of kodo millet and their associated functions and its impact over plant growth and survival. Metagenomics of Paspalum scrobiculatum L.(kodo millet) rhizopshere revealed taxonomic communities with functional capabilities linked to support growth and development of the plants under nutrient-deprived, semi-arid and dry biotic conditions. Among 65 taxonomically diverse phyla identified in the rhizobiome, Actinobacteria were the most abundant followed by the Proteobacteria. Functions identified for different genes/proteins led to revelations that multifunctional rhizobiome performs several metabolic functions including carbon fixation, nitrogen, phosphorus, sulfur, iron and aromatic compound metabolism, stress response, secondary metabolite synthesis and virulence, disease, and defense. Abundance of genes linked with N, P, S, Fe and aromatic compound metabolism and phytohormone synthesis—along with other prominent functions—clearly justifies growth, development, and survival of the plants under nutrient deprived dry environment conditions. The dominance of actinobacteria, the known antibiotic producing communities shows that the kodo rhizobiome possesses metabolic capabilities to defend themselves against biotic stresses. The study opens avenues to revisit multi-functionalities of the crop rhizosphere for establishing link between taxonomic abundance and targeted functions that help plant growth and development in stressed and nutrient deprived soil conditions. It further helps in understanding the role of rhizosphere microbiome in adaptation and survival of plants in harsh abiotic conditions. View Full-Text
Keywords: Paspalum scrobiculatum; kodo; millet; rhizosphere; metagenomics; metabolic functions Paspalum scrobiculatum; kodo; millet; rhizosphere; metagenomics; metabolic functions
►▼ Show Figures 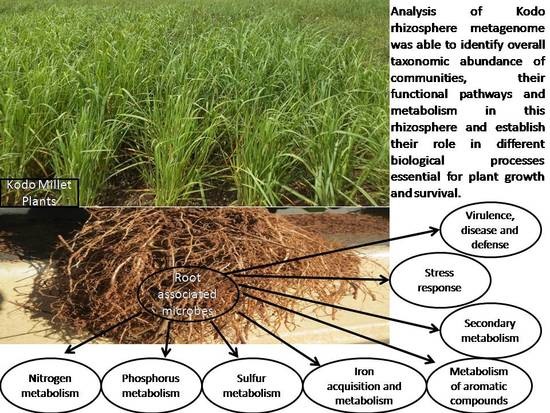