Bacterial leaf spot of tomato and pepper (BLS), an economically important bacterial disease caused by four species of Xanthomonas (X. euvesicatoria (Xe), X. vesicatoria (Xv), X. gardneri (Xg), and X. perforans (Xp)), is a global problem and can cause over 50% crop loss under unfavorable conditions. Among the four species, Xe and Xv are prevalent worldwide. Characterization of the pathogens is crucial for disease management and regulatory purposes. In this study, we performed a multilocus sequence analysis (MLSA) with six genes (hrcN, dnaA gyrB, gapA, pdg, and hmbs) on BLS strains. Other Xanthomonas species were included to determine phylogenetic relationships within and among the tested strains. Four BLS species comprising 76 strains from different serological groups and diverse geographical locations were resolved into three major clades. BLS xanthomonads formed distinct clusters in the phylogenetic analyses. Three other xanthomonads, including X. albilineans, X. sacchari, and X. translucens pv. undolusa revealed less than 85%, 88%, and 89% average nucleotide identity (ANI), respectively, with the other species of Xanthomonas included in this study. Both antibody and MLSA data showed that Xv was clearly separated from Xe and that the latter strains were remarkably clonal, even though they originated from distant geographical locations. The Xe strains formed two separate phylogenetic groups; Xe group A1 consisted only of tomato strains, whereas Xe group A2 included strains from pepper and tomato. In contrast, the Xv group showed greater heterogeneity. Some Xv strains from South America were closely related to strains from California, while others grouped closer to a strain from Indiana and more distantly to a strain from Hawaii. Using this information molecular tests can now be devised to track distribution of clonal populations that may be introduced into new geographic areas through seeds and other infected plant materials. View Full-Text
Keywords: Xanthomonas euvesicatoria; multilocus sequence analysis (MLSA); ELISA; Xanthomonas genomes; phylogenetics; population genetics; phytobacteria; bacterial leaf spot Xanthomonas euvesicatoria; multilocus sequence analysis (MLSA); ELISA; Xanthomonas genomes; phylogenetics; population genetics; phytobacteria; bacterial leaf spot
►▼ Show Figures 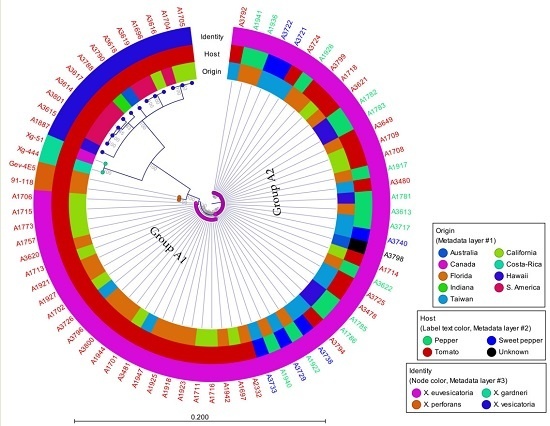