Pathogenetic Impact of Bacterial–Fungal Interactions
Next Article in Special Issue

A Dengue Vaccine: Will It be Accepted and Is It Feasible? Lessons from Barranquilla, Colombia, and Merida, Venezuela

Hepatitis E virus (HEV) is a major cause of acute hepatitis worldwide. In France, hyperendemic areas including Corsica have an anti-HEV Immunoglobulin G (IgG) prevalence higher than 50%. The aim of this study was to determine the seroprevalence of anti-HEV IgG in three adult populations in Corsica and the risk factors associated with antibody detection. Between 2017 and 2019, a total of 930 individuals, including 467 blood donors, 393 students or university staff members and 70 patients from general practice, were tested for the presence of anti-HEV IgG using the Wantai HEV IgG enzyme immunoassay kit and filled a questionnaire. The association between seropositivity and potential risk factors was tested with univariate and multivariate analyses. Out of the 930 samples, 52.3% (486/930) were seropositive—54.4% (254/467) among blood donors, 47.6% (187/393) among university students and 64.3% (45/70) among patients of general practice. Three main risk factors were identified: (i) skinning and butchering (Adjusted Odds Ratio aOR = 2.76, 95% confidence interval [95% CI] [1.51–5.37]; p-value < 10−3), (ii) consumption of a local pork live raw sausage (fittonu) (aOR = 1.95 95% CI [1.45–2.64]; p-value = 10−5), and (iii) increasing age (p-value = 0.003). Seropositivity rates between the different populations were homogeneous after age stratification. This cross-sectional study indicates a high anti-HEV IgG seroprevalence in the Corsican adult population, not significantly different between women and men and increasing with age. This serosurvey also showed homogeneity regarding the exposure to HEV among three different types of populations. Finally, we confirmed the endemicity of Corsica with respect to HEV and identified a strong association between consumption of figatellu/fittonu and the practice of skinning and butchering with the detection of anti-HEV IgG. View Full-Text
Keywords: seroprevalence; hepatitis E; IgG; risk factor; corsica; hyperendemic; hepatitis; France seroprevalence; hepatitis E; IgG; risk factor; corsica; hyperendemic; hepatitis; France
►▼ Show Figures 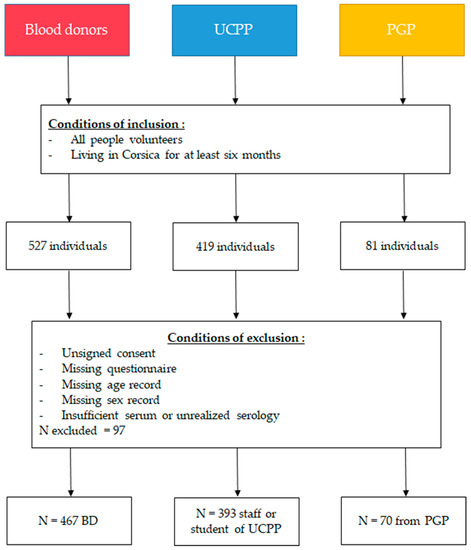