To evaluate the clinical utility of high-throughput sequencing (HTS) approach-based analysis of the bacterial and fungal genome in vitreous fluids from patients clinically diagnosed as endophthalmitis, we subjected 75 vitreous fluids from clinically presumed infectious endophthalmitis patients to high-throughput sequencing (Illumina HiSeq 2500) after DNA extraction and amplification of the 16S rRNA for the detection of bacteria, and ITS 2 region for detection of fungal pathogens. As controls, we included vitreous biopsies from 70 patients diagnosed with other non-infectious retinal disorders. Following the construction of the curated microbial genome database and filtering steps to reduce ambiguousness/contaminants from the environment, the paired reads were analyzed. Our HTS reads revealed in almost all cases the same organism that was grown in culture (bacterial-14/15, fungal 3/3) by conventional microbiological workup. HTS additionally diagnosed the presence of microbes in 42/57 (73.7%) patients who were conventionally negative (fungal pathogens in 36/57, bacterial pathogens in 11/57, including five cases that showed the presence of both bacterial and fungal organisms). Aspergillus sp., Fusarium sp., Exserohilum sp., and Candida sp. were the most predominant genera in our cohort of culture-negative endophthalmitis cases. Heat map based microbial clustering analysis revealed that these organisms were taxonomically similar to the species identified by conventional culture methods. Interestingly, 4/70 control samples also showed the presence of bacterial reads, although their clinical significance is uncertain. HTS is useful in detecting pathogens in endophthalmitis cases that elude conventional attempts at diagnosis and can provide actionable information relevant to management, especially where there is a high index of suspicion of fungal endophthalmitis, particularly in tropical countries. Outcome analyses and clinical trials addressing the success and cost savings of HTS for the diagnosis of endophthalmitis are recommended.
Keywords: endophthalmitis; high throughput sequencing; culture-negative endophthalmitis; high throughput sequencing; culture-negative

Endophthalmitis is a purulent vision-threatening infection of the intraocular fluids and is reported to vary by geographic location in incidence and cause, following ocular surgery or injury and rarely by hematogenous spread [1]. The clinical outcome depends on the pathogenesis of the organism and clinical intervention. Identification and characterization of the causal pathogen from routine culture media is limited due to the early administration of broad-spectrum or prophylactic antimicrobial drugs, as well as organisms that are fastidious or slow-growing [2]. However, a common concern with conventional testing methods is the limitation in the breadth of pathogens detected, and clinicians are often left with negative results and the persisting question of whether the condition was actually caused by an infection or just an inflammatory reaction. While direct sequencing of the 16S rRNA/ITS region can be applied on clinical specimens to detect the presence of microorganisms [3,4], in low pathogen loads or polymicrobial infections it is usually challenging to sort out ambiguous signals from mixed chromatograms of samples, and sequences often remain unidentified/misidentified. High-throughput sequencing (HTS) also termed as next-generation sequencing (NGS), is a novel platform with the potential to simultaneously detect and independently sequence virtually all the DNA sequences of the infectious agents present in a sample [5,6,7]. However, this unbiased amplification results in a large number of reads of both host and pathogen DNA, and the complexities in detecting and interpreting millions of sequences to identify the microbe(s) of interest is considerable and challenging. Targeted HTS refers to the selective capture or amplification of specific genomic regions of interest prior to massive parallel sequencing, compared to unbiased random amplification which results in the sequencing of all the nucleic acids, including host and pathogen nucleic acids, and millions of reads need to be analyzed to identify the pathogen(s) of interest. Targeted HTS, on the other hand, provides better sensitivity and specificity along with ease of downstream analysis and a lower cost by allowing more samples to be tested in one run [8].
To cross the divide between the conventional microbiological methods and whole-genome sequencing, a culture free platform using targeted HTS would be an excellent, less complicated approach, with a lower cost to detect pathogens for implementation in diagnostic laboratories. We have previously shown that NGS is a good tool for microbial research in endophthalmitis [9], but the next big challenges will be the standardization and validation of procedures and bioinformatics pipeline that address the specific challenges for clinical standards, especially in culture-negative cases. HTS is more likely to become a future diagnostic tool in routine ocular microbiological laboratories. Therefore, in this study, we tested 75 vitreous fluids using the targeted HTS assay, to evaluate its feasibility in an ocular clinical setting for the diagnosis of culture-negative endophthalmitis. Finally, the scope and impact of this method to diagnose pathogens in vitreous biopsies were evaluated within a clinical context.

HTS of the V3-V4 region of 26 samples on the Illumina platform generated up to 16.1 million high-quality reads and average reads per sample were 0.61 million reads ± 0.37 million reads [s.d] and clustered into 1910 OTUs (664 reference OTUs and 1246 de novo OTUs). With the ITS2 region amplicon of 39 samples, up to 25.53 million reliable reads were generated with the mean of 0.65 ± 0.31 million reads per sample, which clustered into 394 OTUs (104 reference OTUs and 290 de novo OTUs). It is interesting to note that the number of fungal OTUs is significantly lower than the bacterial OTUs. This is presumably because of less diversity of fungal pathogens involved in endophthalmitis. An analysis of 75 patient samples with presumed infectious endophthalmitis by HTS, identified microbial existence in 60 patients, of which only 18 were conventional culture-positive for bacteria (15) and fungus (3), as shown in Table 2a,b. Among 57 culture-negative cases, 11 cases showed the presence of bacteria (Figure 1a), and 36 cases unveiled the presence of fungus (Figure 1b), in which 5 cases showed the presence of both bacteria and fungi. A total of 15 out of 75 samples were negative for both microbial cultivation as well as HTS.

2.3. Agreement between Culture and HTS Techniques for Culture-Positive Samples

HTS results for culture-positive cases showed a high-quality match in 14/15 bacterial cases and 3/3 fungal cases (Table 2 and Table 3), and the same pathogen was identified. In 1/15 cases, there was a complete mismatch of the bacteria as Corneybacterium pseudodiphtherticum grew in culture while HTS analysis showed the presence of Pseudomonas sp. In the case of fungus, predominantly Candida sp. and Fusarium sp. were identified by HTS (Table 3).

HTS detected clinically significant fungal pathogens in 36/57 samples and bacterial pathogens in 11/57, including five cases that showed the presence of both bacterial and fungal organisms of which are conventionally culture-negative. HTS analysis for bacterial culture-negative cases was predominantly positive for Streptococcus sp., Staphylococcus sp., Bacillus sp., Gemella sp., and Klebsiella sp. (Figure 1a), while in the case of culture-negative fungus, Apergillus sp., Candida sp., Exserohilum sp., and Fusarium sp. (Figure 1b) were predominant.

2.5. Heatmap with Bacterial and Fungal Genera

A heatmap depicting the relative abundances of 24 bacterial genera in 26 samples in two-dimensional space, did not segregate culture-positive and culture-negative samples into two different clusters (Figure 2a). It reveals that the abundance of bacterial genera did not vary across the culture positive and negative samples. The heatmap with fungal genera of 39 samples also failed to segregate culture-positive and culture-negative samples (Figure 2b). It is also interesting to note that the samples were predominantly dominated by Aspergillus sp. and Candida sp. The hierarchical clustering in both heatmaps (Figure 2a,b) discloses that the causative organisms (bacteria/fungi) of endophthalmitis were similar in culture-positive and negative cases.
Interestingly four of the 70 control samples also showed the presence of bacterial pathogens by HTS, as shown in Table 4.

This was a prospective study project approved by the L V Prasad Eye Institute-Institutional Review Board (LEC 11-16-112) on 8 November 2016, and the research protocols and study design adhered to the tenets of the Declaration of Helsinki. Informed consent was taken from each patient after recording clinical details prior to study participation.

Vitreous fluids from 75 patients diagnosed clinically with presumed infectious endophthalmitis between February 2017 and December 2017 were included in the study and all samples were subjected to routine microbiological evaluation as described earlier [9]. All cases had clinical features suggestive of endophthalmitis including ocular pain, decreased vision, eyelid edema, conjunctival congestion, chemosis, intense AC inflammation, extensive vitreous exudates, corneal infiltrates or a lens abscess, hypopyon, vitritis, and decreased red reflex. They were all clinically diagnosed and treated on lines of endophthalmitis. In our series, we had excluded all cases which had a suspicious diagnosis or where the clinical characteristics were ambiguous.
Briefly, vitreous fluid was collected aseptically from all these cases in the operating room. A standard three port, vitrectomy was done, and a 6 mm infusion cannula was used and the vitreous was aspirated through the vitrectomy probe that was connected to the vitrectomy suction tube. The undiluted (about 0.5 mL) vitreous was collected in a 2 mL disposable syringe attached to the vacuum line of the vitreous cutter and a vacuum was created by mechanical suction. The syringe with the vitreous sample was then capped with a hypodermic needle and transported in a sterile plastic container to the microbiology laboratory of the institute. Following the vitrectomy, in all these 75 patients, an intravitreal injection of antibiotics (vancomycin 1 mg/0.1 mL and amikacin 0.4 mg/0.1 mL or ceftazidime 2.25 mg/0.1 mL) with or without intravitreal dexamethasone (400 µg/0.1 mL) for empirical coverage was administered. Based on clinical suspicion or microbiological evidence of a fungal infection, the patients were given intravitreal amphotericin B (5µg/0.1 mL) additionally along with systemic antifungals. All these patients were also given ciprofloxacin (750 mg twice daily for 6 days) as the systemic antibiotic along with topical ciprofloxacin, atropine, and prednisolone acetate eye drops.
For the control group, 70 patients undergoing vitrectomy for other retinal disorders (retinal detachment, or macular hole or diabetic retinopathy), that had consented for vitreous tap done during the procedure, during the same period were included.

DNA was extracted from the fluids using the QIAamp DNA minikit (Qiagen, Germany), followed by PCR amplification using the V3-V4 hypervariable region of the16S rRNA gene for bacteria [3], and internal transcribed spacer region (ITS2) of the ribosomal small subunit RNA for fungus [4], before purification and sequencing as described earlier [9].

Raw paired-end reads of individual samples were assembled using the FLASH program and filtered to remove low quality reads (average Phred score <30) and chimeric sequences using Prinseq-lite and Usearch61, respectively. The quality reads were then subjected to the open reference operational taxonomic unit (OTU) picking using the QIIME (Quantitative Insights into Microbial Ecology) pipeline [12] with Greengenes (V 13.8) and Unite (V 12.11) OTUs clustered at 97% sequence similarity for bacterial and fungal identification, respectively. Taxonomic classification for denovo-OTUs was made through Wang Classifier with a bootstrap of 80%. Sparse OTUS (<0.001%) were removed from further analysis and taxonomic profiles for both bacterial and fungal data based on OTU annotation were generated at the genera level. Clustered Heatmaps with the rank abundance plot of bacterial and fungal genera were plotted using R software.

To avoid any potential contaminant in the reads, we additionally sequenced DNA extraction (blank) controls and removed those taxa (however at a lesser frequency compared to the test groups) from the datasets of all endophthalmitis patients. We reported only those reads from the pathogens that were not present in the negative and blank (water only) control on the same run and library preparation.

In conclusion, this targeted HTS platform is expected to be potentially game-changing technology in clinical microbiology, especially in culture-negative infections, while also broadening the repertoire of tools readily in-hand for health decision making in the future. 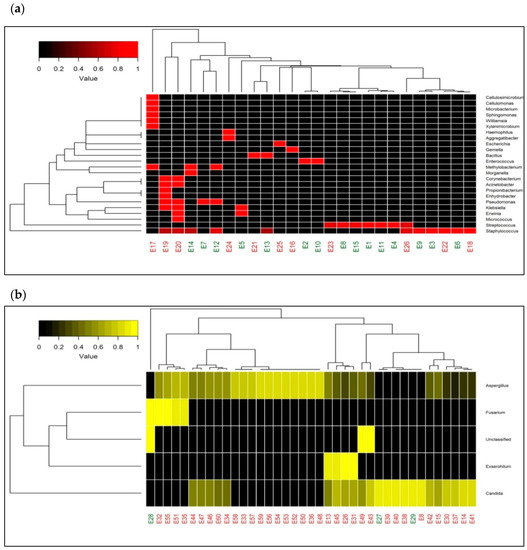 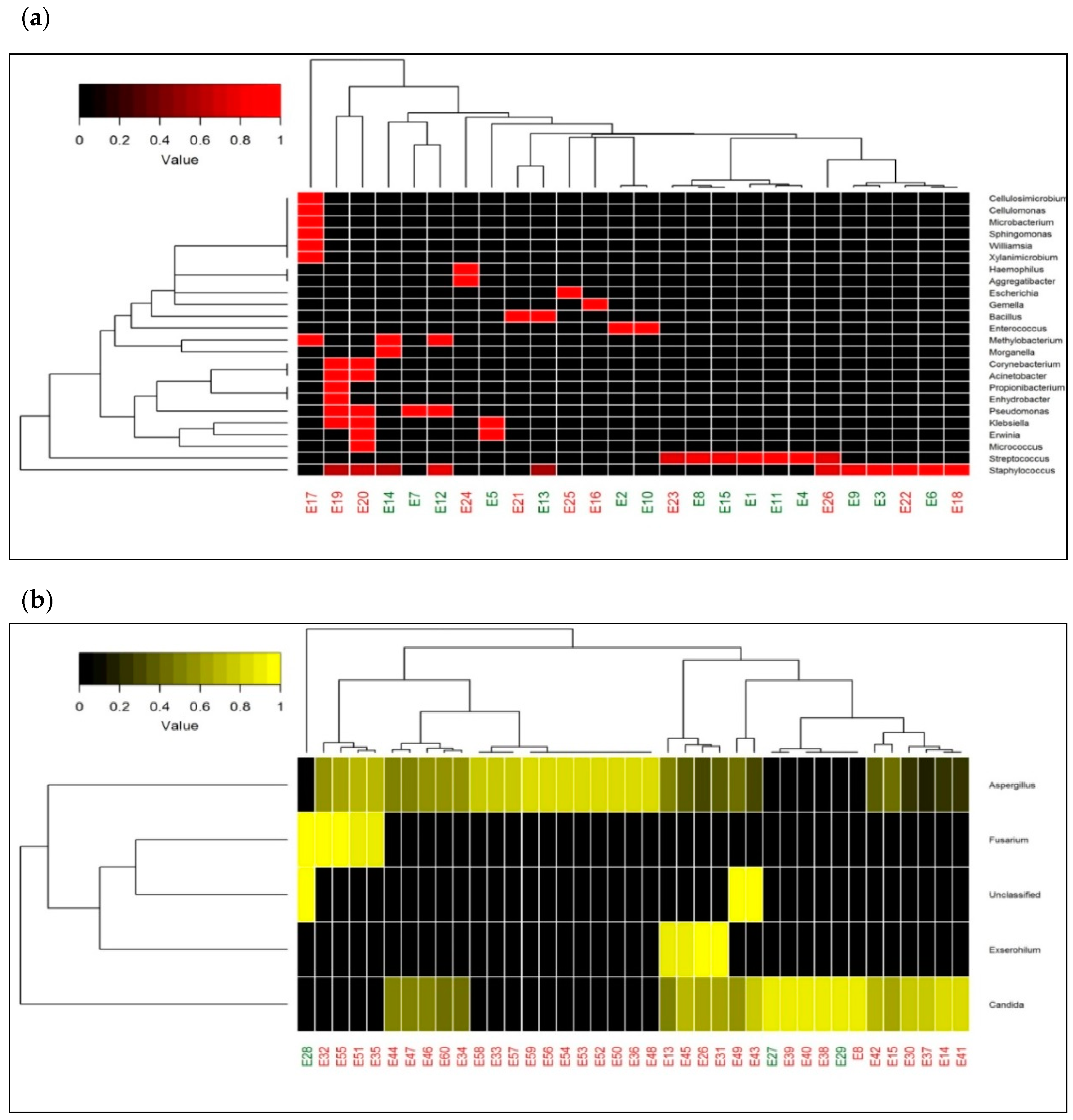