Determining the International Spread of B.1.1.523 SARS-CoV-2 Lineage with a Set of Mutations Highly Associated with Reduced Immune Neutralization

:
In several randomized studies, remdesivir (RDV) has been reported to shorten the recovery period and improve clinical outcomes in COVID-19 patients, and thus, it is recommended as a standard of care. Nevertheless, controversial reports have been published. The aim of the present study is to evaluate the effectiveness of remdesivir in hospitalized patients with COVID-19 pneumonia at three Greek University Departments of Infectious Diseases with homogenous treatment protocols. From September 2020 to February 2021, we retrospectively analyzed adults hospitalized with confirmed SARS-CoV-2 infection and radiological findings of pneumonia, who received remdesivir once daily for five days. Exploratory end points were duration of hospitalization, time of intubation, and death. Overall, 551 patients were included in the study. The optimal cutoff point for the number of days needed after symptom initiation for drug administration associated with better clinical outcome was 7 days. Higher odds for discharge and lower for intubation were observed in patients with treatment initiation ≤7 days (p = 0.052 and p = 0.019, retrospectively) regardless of gender (p = 0.537), hypertension (p = 0.096), dyslipidemia (p = 0.221), diabetes mellitus (p = 0.306), and usage of immunomodulators (p = 0.408). Our study has demonstrated beneficial effects of early treatment with remdesivir (≤7 days from symptom onset) on rates of intubation and probability of discharge.
Keywords:
remdesivir; COVID-19; SARS-CoV-2; pandemic; retrospective study; intubation; discharge

Severe acute respiratory syndrome coronavirus 2 (SARS-CoV-2) responsible for the coronavirus disease 2019 (COVID-19) induced an initial outbreak, in December 2019, in Wuhan, China, and rapidly led to a pandemic [1,2]. Effective antiviral treatments are vital in order to reduce mortality rates and hospitalizations and to protect vulnerable populations.
Remdesivir (GS-5734), a monophosphoramidate nucleoside prodrug with known antiviral activity against SARS-CoV and the Middle East respiratory syndrome coronavirus (MERS-CoV), was evaluated for its efficacy against SARS-CoV-2 early during the COVID-19 pandemic [3,4]. Upon entry into target cells, remdesivir undergoes metabolic conversion into its active form, remdesivir triphosphate (remdesivir-TP), which competes with adenosine triphosphate (ATP) for incorporation into the nascent RNA strand and acts as substrate for RNA dependent RNA polymerase (RdRP), thus, inhibiting viral replication machinery [5,6,7]. Remdesivir-derived RdRP inhibition is mainly due to delayed chain termination resulting from (i) misintegration of nucleoside triphosphate (NTP) into replicating RNA by RdRp, (ii) prevention of further chain elongation after NTP plus three additional nucleosides, and (iii) premature termination of RNA synthesis [7].
According to the results of the Adaptive COVID-19 Treatment Trial (ACTT-1) (a double-blind, randomized, placebo-controlled trial) remdesivir was associated with a shorter period to recovery [8]. In contrast to the initial jeopardy, the final results of the WHO Solidarity randomised trial and the Canadian Treatments for COVID-19 (CATCO) trial have also documented beneficial roles of remdesivir in survival rates and progression to ventilation in hospitalized patients with COVID-19 pneumonia [9,10]. However, there is still controversy in the existing guidelines on the use of remdesivir in hospitalized patients with COVID-19 [11,12,13].
The effectiveness of remdesivir is associated with the time of treatment initiation. Viremia at admission is a predictor of mortality and poor viral control contributes to disease severity [14]. Studies have shown that the duration of viremia is approximately 10 days, and thus during this period, antiviral treatment should be initiated [15]. Initiation of remdesivir prior to or simultaneously with dexamethasone has been associated with significantly shorter time to clinical improvement and lower mortality risk [16]. Patients with moderate COVID-19 treated with remdesivir for up to 5 days had significantly higher odds of better clinical outcome [17]. Based on these data, the PINETREE clinical trial in non-hospitalized patients at high risk for disease progression reported that a 3-day course of remdesivir resulted in an 87% lower risk of hospitalization or death [18].
The aim of the present retrospective study was to evaluate the effectiveness and the optimal time initiation of remdesivir in hospitalized patients with COVID-19 pneumonia at three University Departments of Infectious Diseases (Athens, Alexandroupolis, and Patra) during the period after the European Medicines Agency (EMA) approval until initiation of vaccination against SARS-CoV-2 (September 2020–February 2021) [19]. We also sought to evaluate our practice by comparing it to the international and national recommendations.

This was a retrospective study conducted at three University Departments of Infectious Diseases (Athens, Alexandroupolis, and Patra). Data from routine care patient charts during the period September 2020 to 28 February 2021 were retrospectively analyzed. The study was carried out in accordance with the Helsinki Declaration of Human Rights.
Adults with confirmed SARS-CoV-2 infection and radiological findings of pneumonia were included in the study. The patients were treated with remdesivir intravenously for five days (200 mg on Day 1, 100 mg on Days 2, 3, 4, and 5). The analysis included: age, gender, comorbidities, usage of immunomodulatory agents, and number of days after symptom onset for first dosage of remdesivir. Exploratory end points were duration of hospitalization, time of intubation, and death.
The statistical analysis of the data was performed using the IBM Statistical Package for the Social Sciences (SPSS), version 19.0 (IBM Corp., Armonk, NY, USA). The normality of quantitative variables was tested using the Kolmogorov–Smirnov test. Normally distributed quantitative variables were expressed as the mean ± standard deviation (SD), while non-normally distributed quantitative variables were expressed as the median value and range. Qualitative variables were expressed as absolute and relative (%) frequencies. A receiver operating characteristic curve (ROC) analysis was performed in order to evaluate the optimal cutoff point for the number of days from the symptom onset until initiation of remdesivir associated with better clinical outcome. Student’s t-test, Mann–Whithey U test, and chi-square test were used to determine differences in demographic and clinical characteristics of patients. All tests were two tailed and statistical significance was considered for p-values < 0.05.

In conclusion, based on published data, remdesivir was associated with better clinical outcome and shorter period of recovery. Our study has demonstrated the significance of early treatment with remdesivir (≤7 days from COVID19 symptom onset) in order to achieve reduced rates of intubation and mortality and higher probability of discharge. Our data fully support the decisions that were taken by the National Committee on the response to COVID-19 pandemic and the therapeutic algorithm that was adopted.

We state that the GREC study, a retrospective, non-interventional, multicenter, observational study, was conducted after IRB approval (a copy of the IRB decision can be filed if required). Ethic Committee Name: Institutional Review Board, General University Hospital of Alexandroupolis, Greece. Approval Code: 39/24.11.2021. Approval Date: 24 November 2021.

Moreover, in compliance with the local regulations, ICF was waived because of the retrospective nature of the study and the analysis used anonymous clinical data. 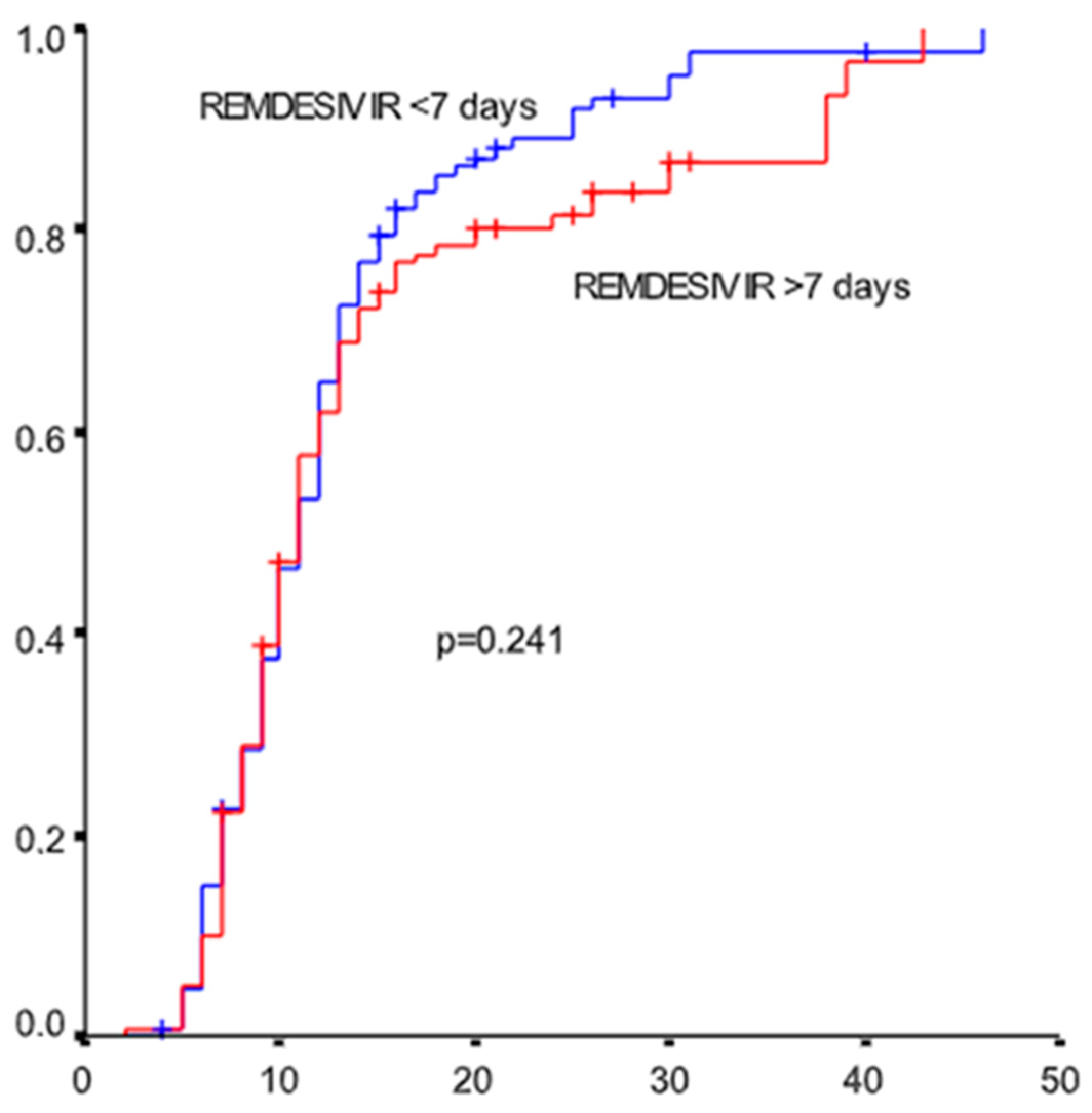