This research explores a new ATE (Automatic Testing Equipment) method for Micro Electro Mechanical Systems (MEMS) devices. In this method, microscale aerodynamic drag force is generated on a movable part of a MEMS sensor from a micronozzle hole located a specific distance above the chip that will result in a measurable change in output. This approach has the potential to be generalized for the characterization of every MEMS device in mass production lines to test the functionality of devices rapidly and characterize important mechanical properties. The most important testing properties include the simultaneous application of controllable and non-invasive manipulative force, a single handler for multi-sensor, and non-contact characterization, which are relatively difficult to find with other contemporary approaches. Here we propose a custom-made sensing platform consisting of a microcantilever array interconnected to a data acquisition device to read the capacitive effects of each cantilever’s deflection caused by air drag force. This platform allows us to empirically prove the functionality and applicability of the proposed characterization method using airflow force stimuli. The results, stimulatingly, exhibited that air force from a hole of 5 µm radii located 25 µm above a 200 × 200 µm2 surface could be focused on a circular spot with radii of approximately 5 µm with surface sweep accuracy of <8 µm. This micro-size airflow jet can be specifically designed to apply airflow force on the MEMS movable component surface. Furthermore, it was shown that the generated air force range could be controlled from 20 nN to 60 nN, approximately, with a linear dependency on airflow ranging from 5 m/s to 20 m/s, which is from a 5 µm radius microhole air jet placed 400 µm above the chip. In this case-study chip, for a microcantilever with a length of 400 µm, the capacitance curve increased linearly from 28.2 pF to 30.5 pF with airflow variation from 5 m/s to 21 m/s from a hole. The resultant curve is representative of a standard curve for testing of the further similar die. Based on these results, this paper paves the way towards the development of a new non-contact, non-invasive, easy-to-operate, reliable, and relatively cheap air-based method for characterizing and testing MEMS sensors.
Keywords: MEMS; automatic testing equipment (ATE); MEMS Testing; characterization; MEMS sensors; microcantilever; air jet; microfluidics MEMS; automatic testing equipment (ATE); MEMS Testing; characterization; MEMS sensors; microcantilever; air jet; microfluidics

A new method for manipulation of mechanical MEMS devices has been introduced in this paper. The AbFM would use the aerodynamics forces of airflow on movable and elastic parts of MEMS sensors and actuators to test their functionality. Here we have used a micromachined microcantilever chip as a test case, which represents a MEMS die for the AbFM method. While more analyses and thorough studies are required for making AbFM a standard method for MEMS devices characterization and testing, this paper creates an avenue for further discoveries and investigations. AbFM is a method in which we first pick up a KGD and by means of simulation and experiments of flow on its components make the diagrams for healthy components under the precise working condition of airflow on each component then prepare that as the test bench for comparing each component of the sensor with these standard KGD diagrams. This would enable us to do MEMS sensor characterization and evaluation with airflow which can be significantly fast and cheap. More importantly, this method can be used for mechanical properties of MEMS sensors components in the fabrication process, and due to this fact that we can apply air with precise control over the force. AbFM can be applied to new emerging microfluidic and micro-pump systems that need fluidic force to check their working conditions and check the inside material functions. Microfluidic passive flow regulatory devices [55], integrated peristaltic pumps, [56], and compact hollow structures for microfluidic pumping [57] are three important examples of a potential target of AbFM use for testing and characterizing. AbFM method is a promising method for future testing and characterization of MEMS devices; however, there are some important concerns that need to be addressed in future contributions. The most important characteristic of the airflow-based method is using airflow as the actuator. The air temperature can increase the device temperature locally, and even its moisture content might become another issue if not be considered in the design processes. The moisture in the air can short-circuit the sensor or even manipulate the capacitive features of the sensor as a dielectric. This issue opens the field for a new area in traditional aerodynamics as nanoscale aerodynamics to study air dynamics at very low scale down to the nanometer. Such a low length scale definitely challenges the classical air dynamics formulation. This work can be considered to be a bridge between modern aerodynamics and the MEMS testing industry.

A new method for testing and characterizing MEMS mechanical sensors is introduced in which airflow is employed to generate manipulative µN- and nN-focused forces on movable components of MEMS devices; this allows us to manipulate the components functionality and its mechanical characteristics. AbFM could be generalized to every MEMS device in which a movable elastic component is responsible for sensing or actuating, such as MEMS accelerometer, micromirrors, microphone condensers, pressure sensors, and so forth. In the design process of these sensors, after that the CAD file of the MEMS device is finalized, the CAD file is imported in the FSI simulation for designing AbFM key parameters that help to construct the test handler. These key parameters are the position of the air jet, size of microhole etc. that help us to get the calibration curve for airflow velocity and the output electrical signals. Currently, by means of simulation, we have proved AbFM functionality for testing the chip and recognizing non-idealities such as microcracks on the surface. With the help of simulation, it is possible to determine the net flow force on the surface of the microdevice and then draw the relationship between airflow velocity and the output electrical signal. Current results are the application of this method for microcantilever as a case study, but they will pave the way for further research and investigation for other mechanical MEMS sensors. AbFM can be deemed as an ASMT method that can be specifically designed for every mechanical sensor. 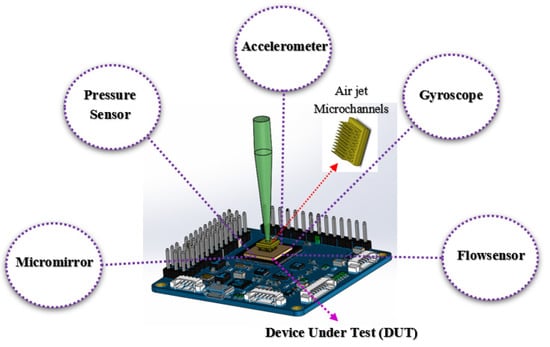 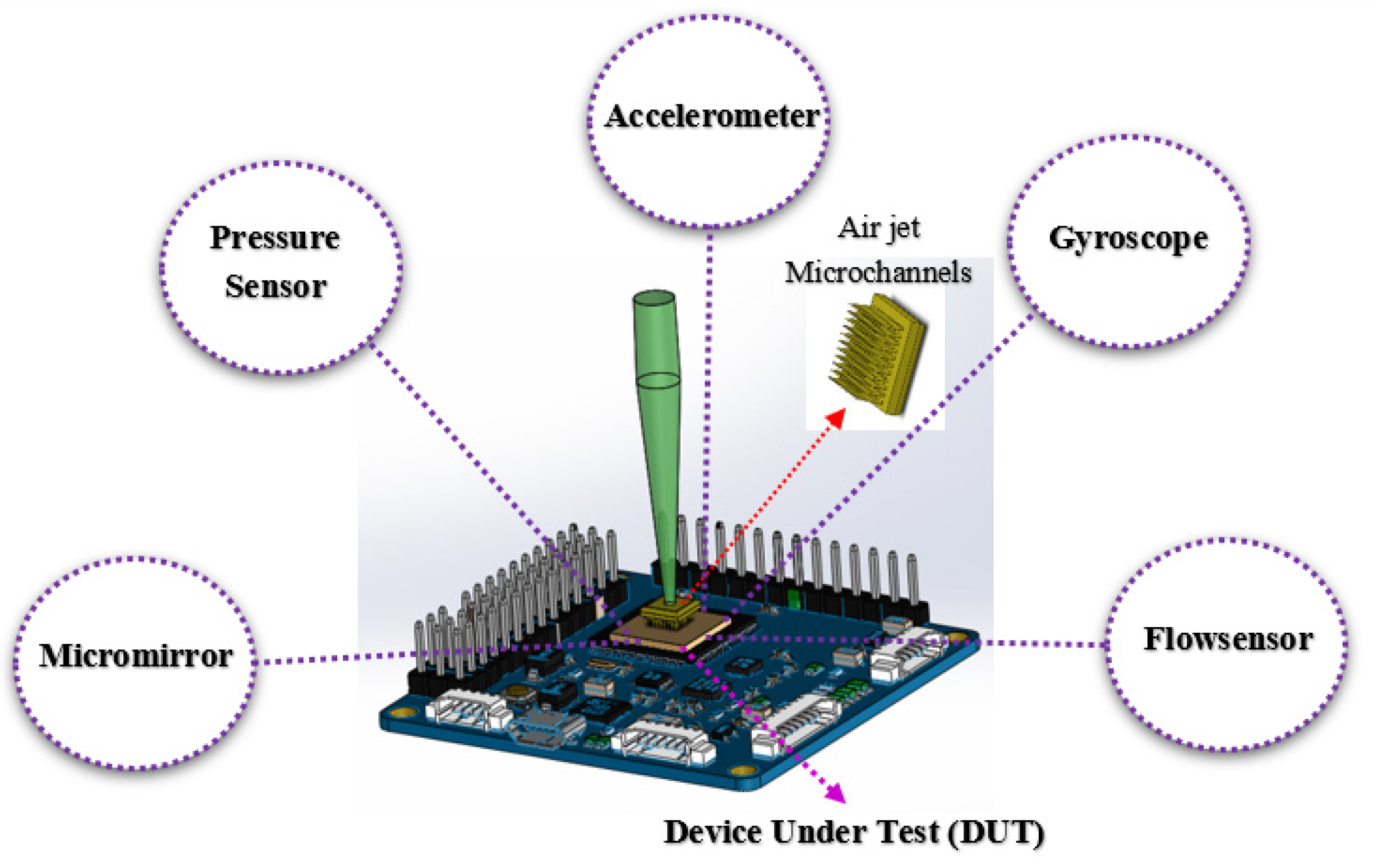 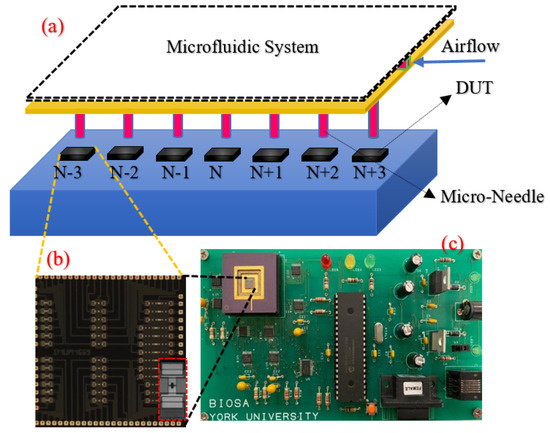 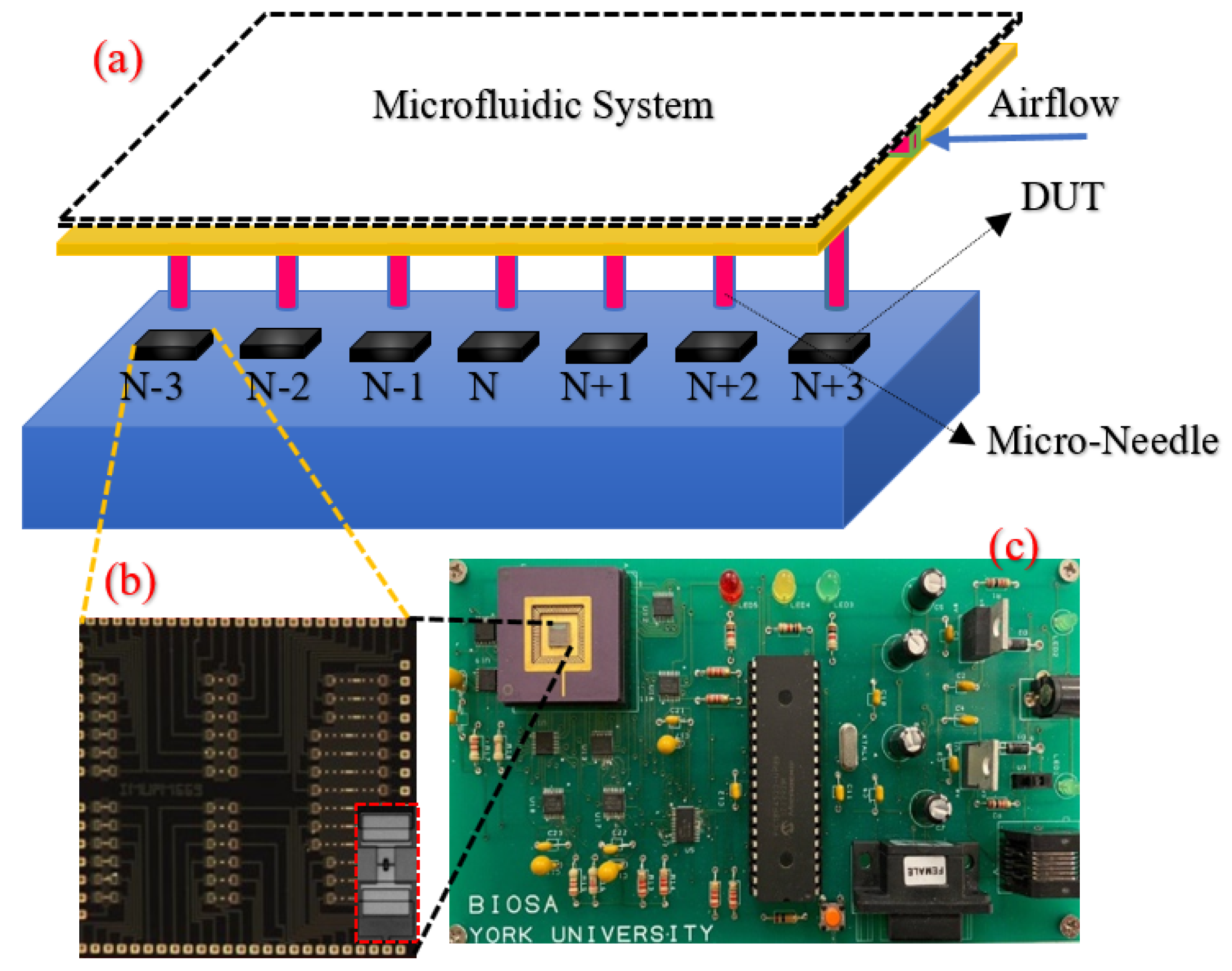 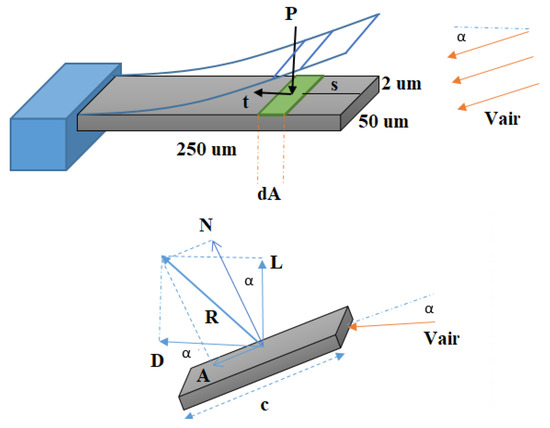 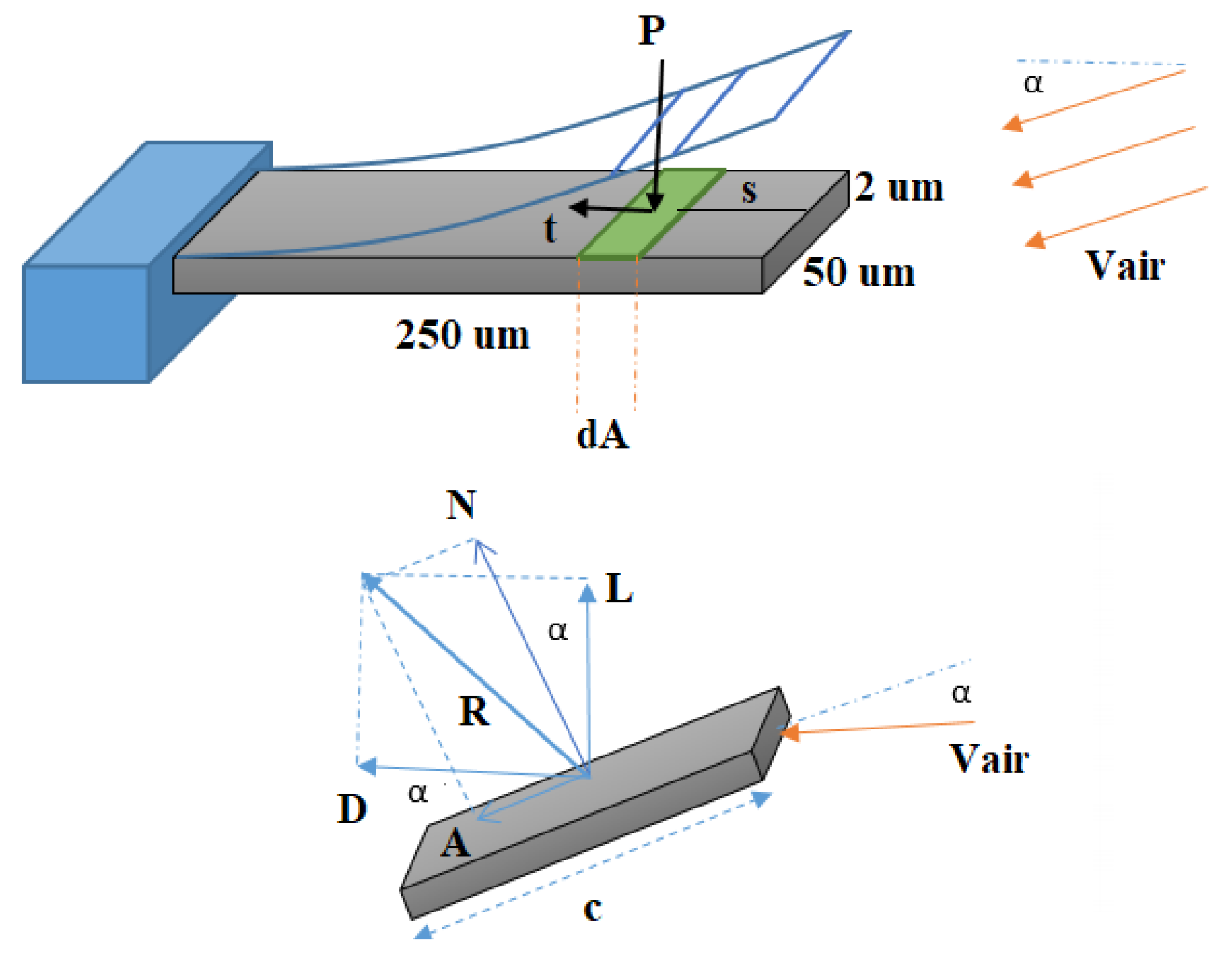 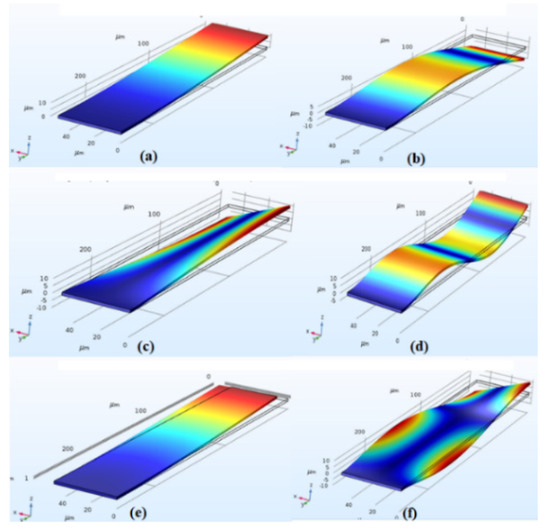 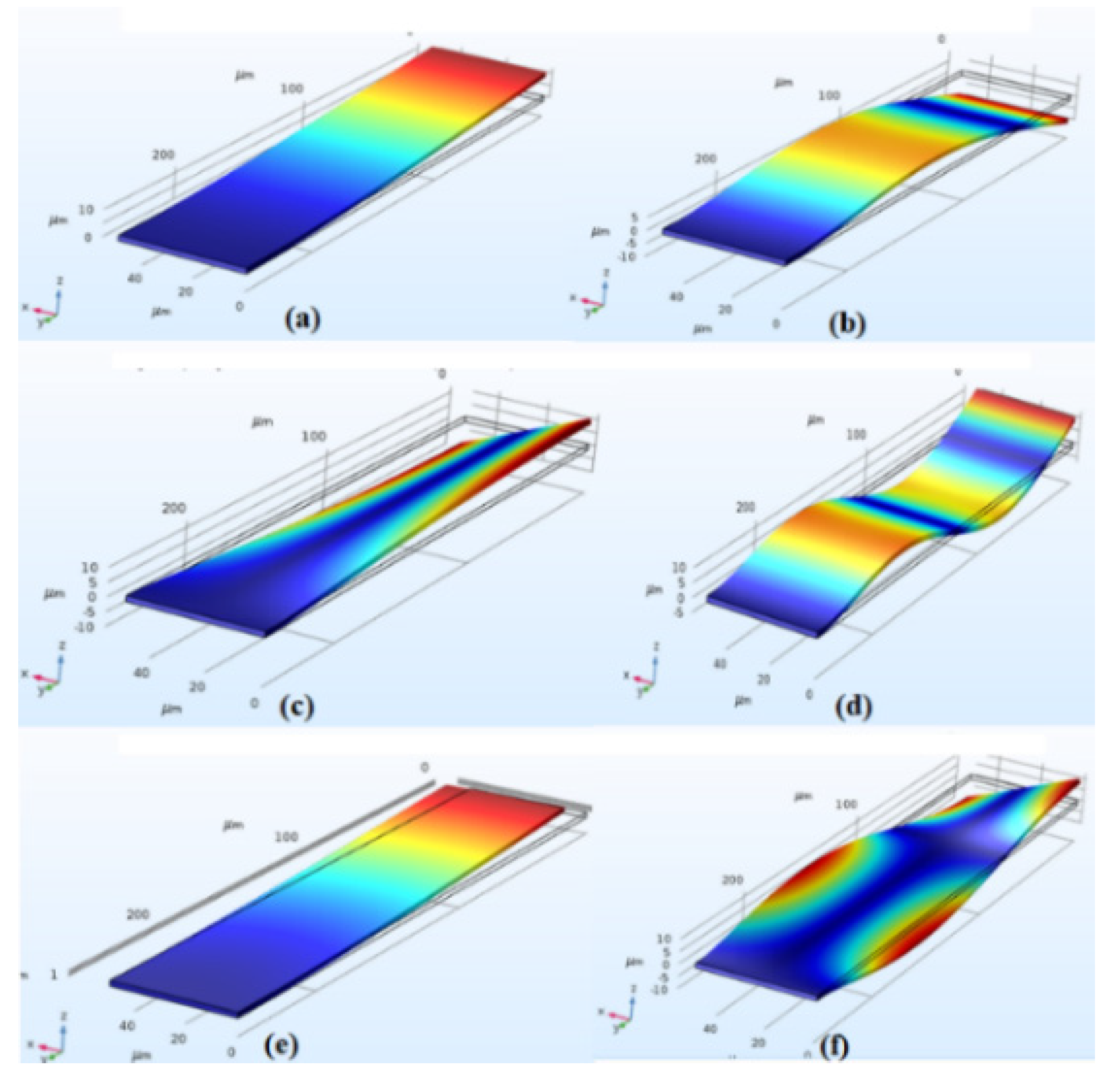 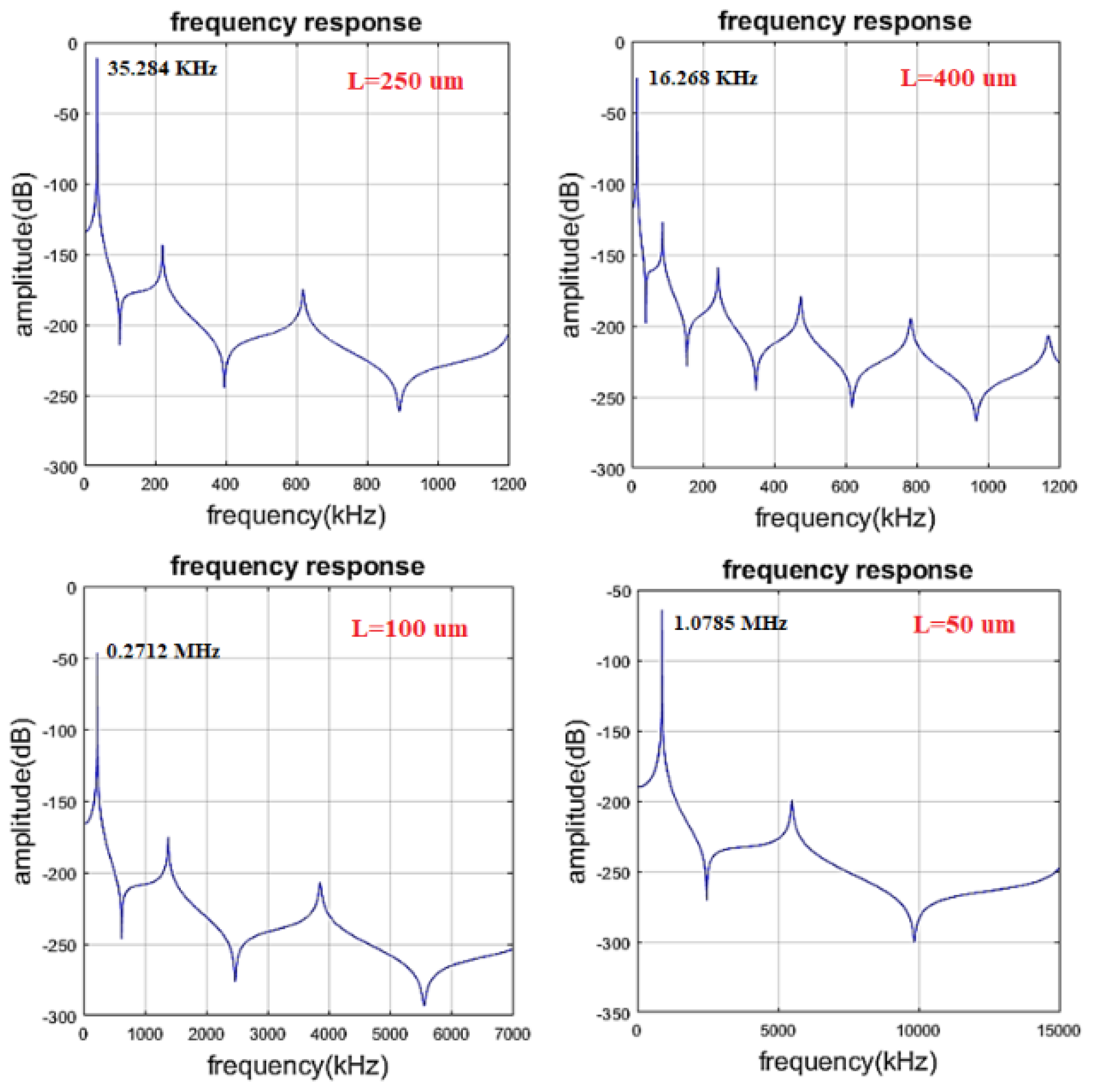 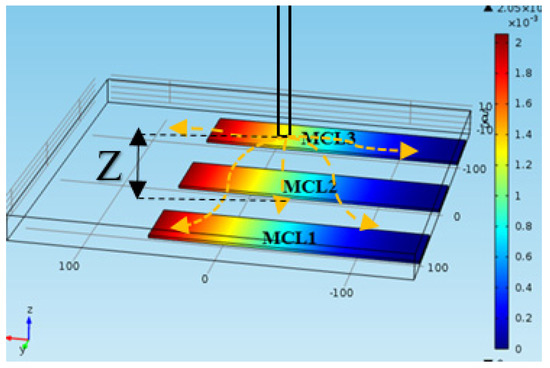 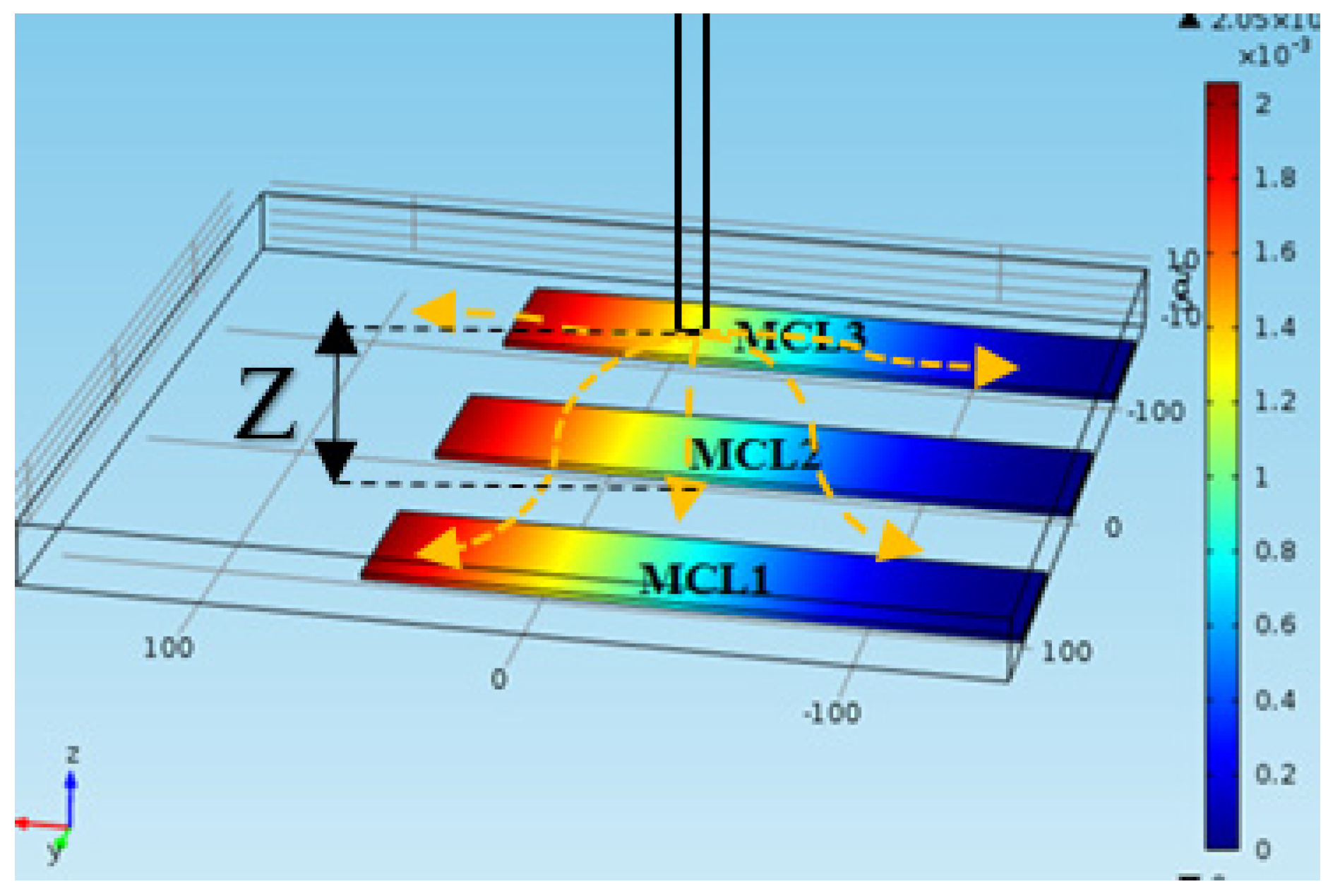 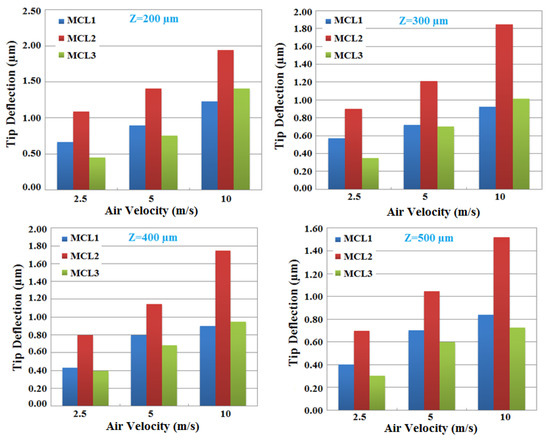 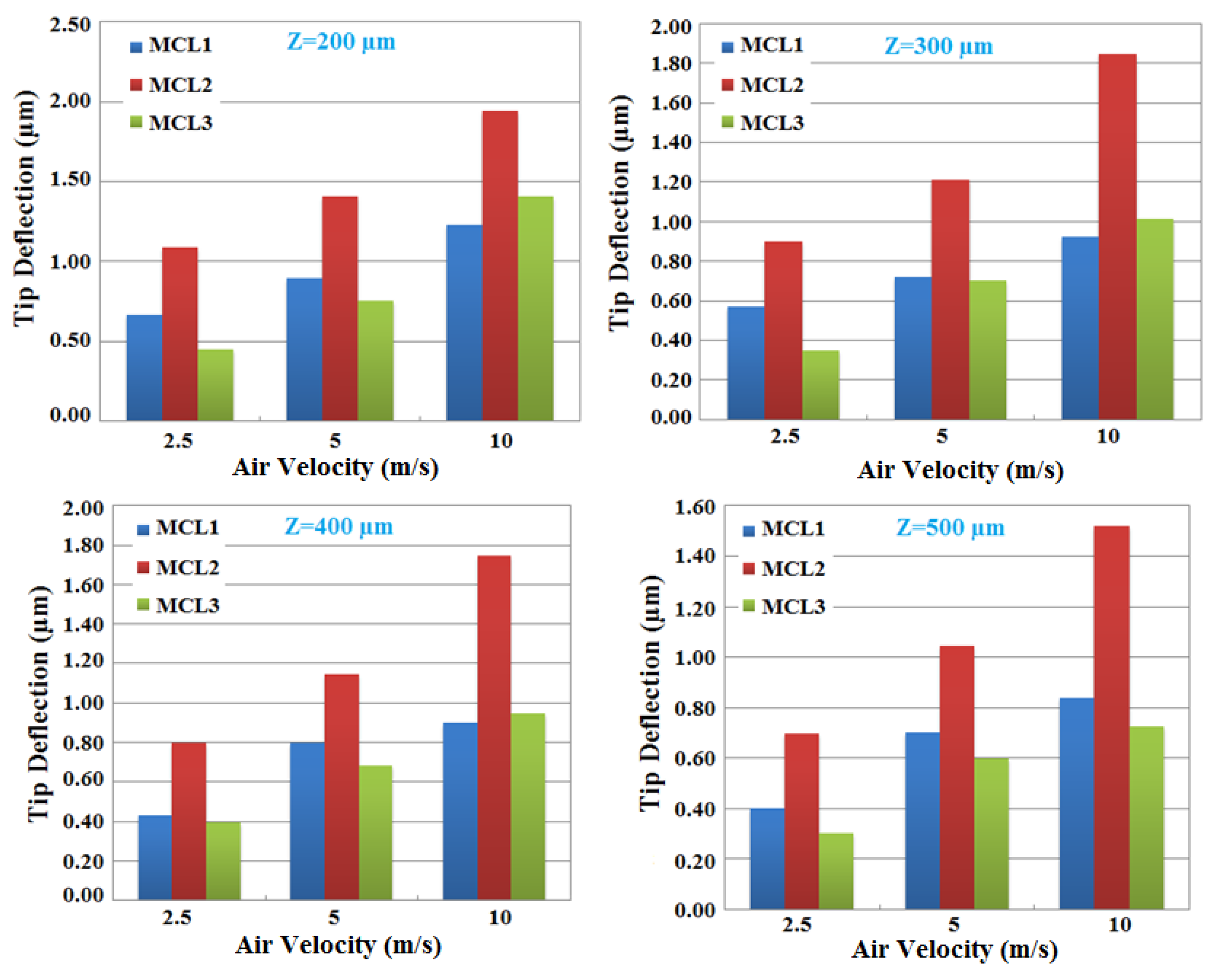 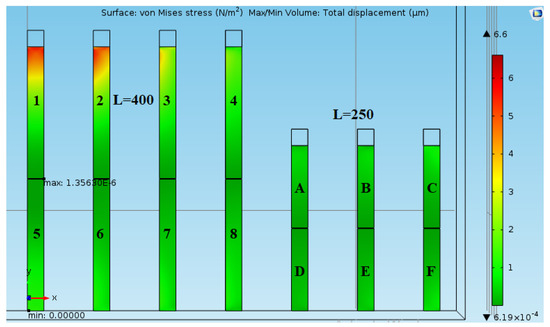 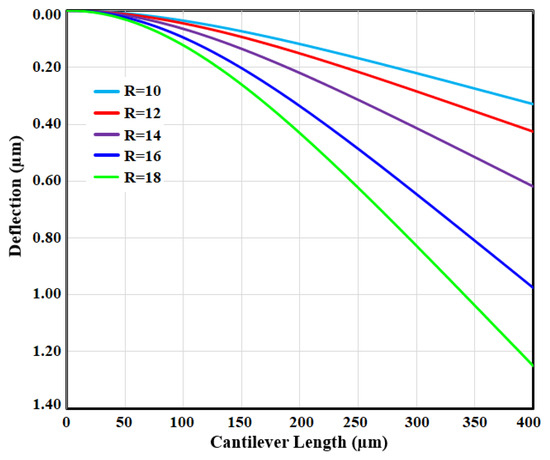 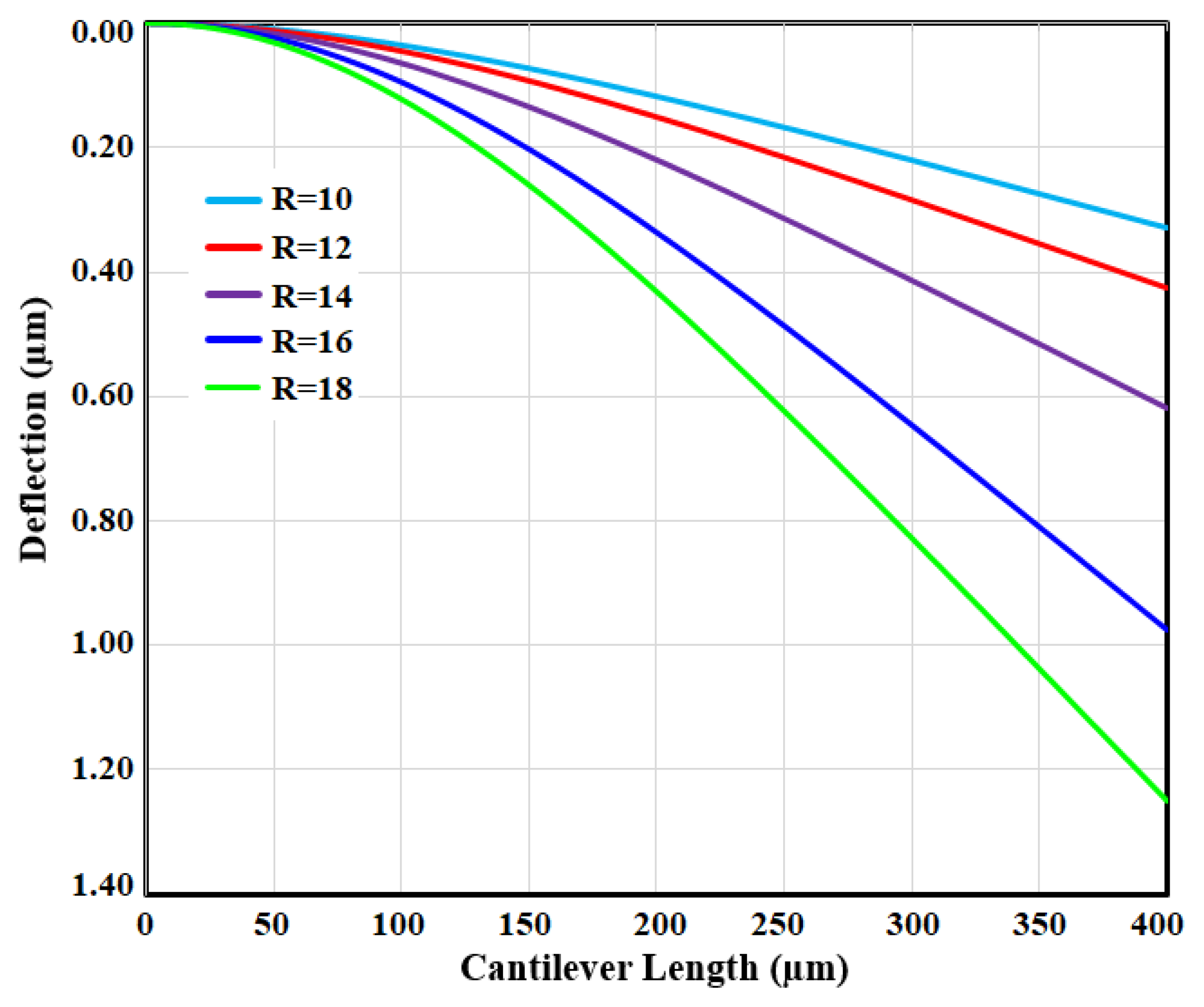 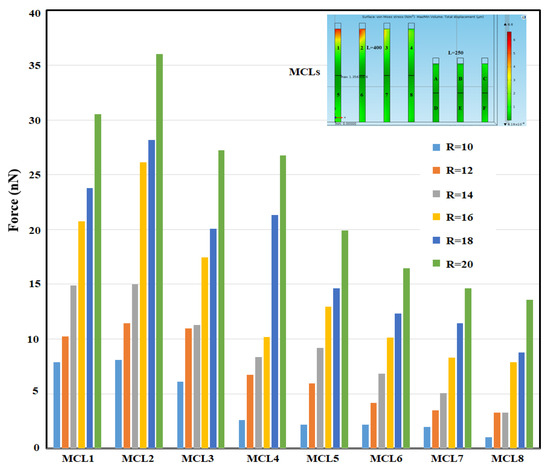 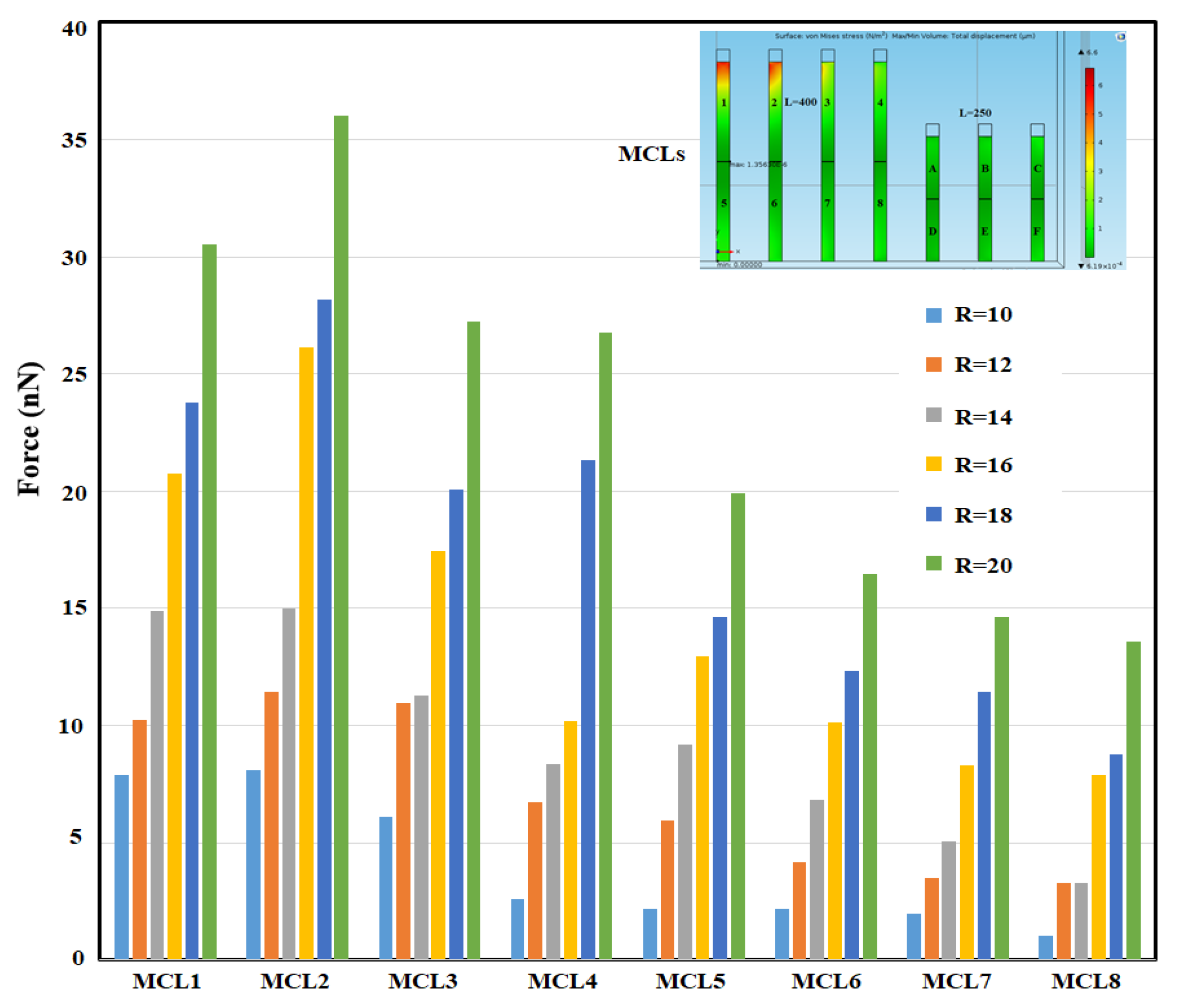 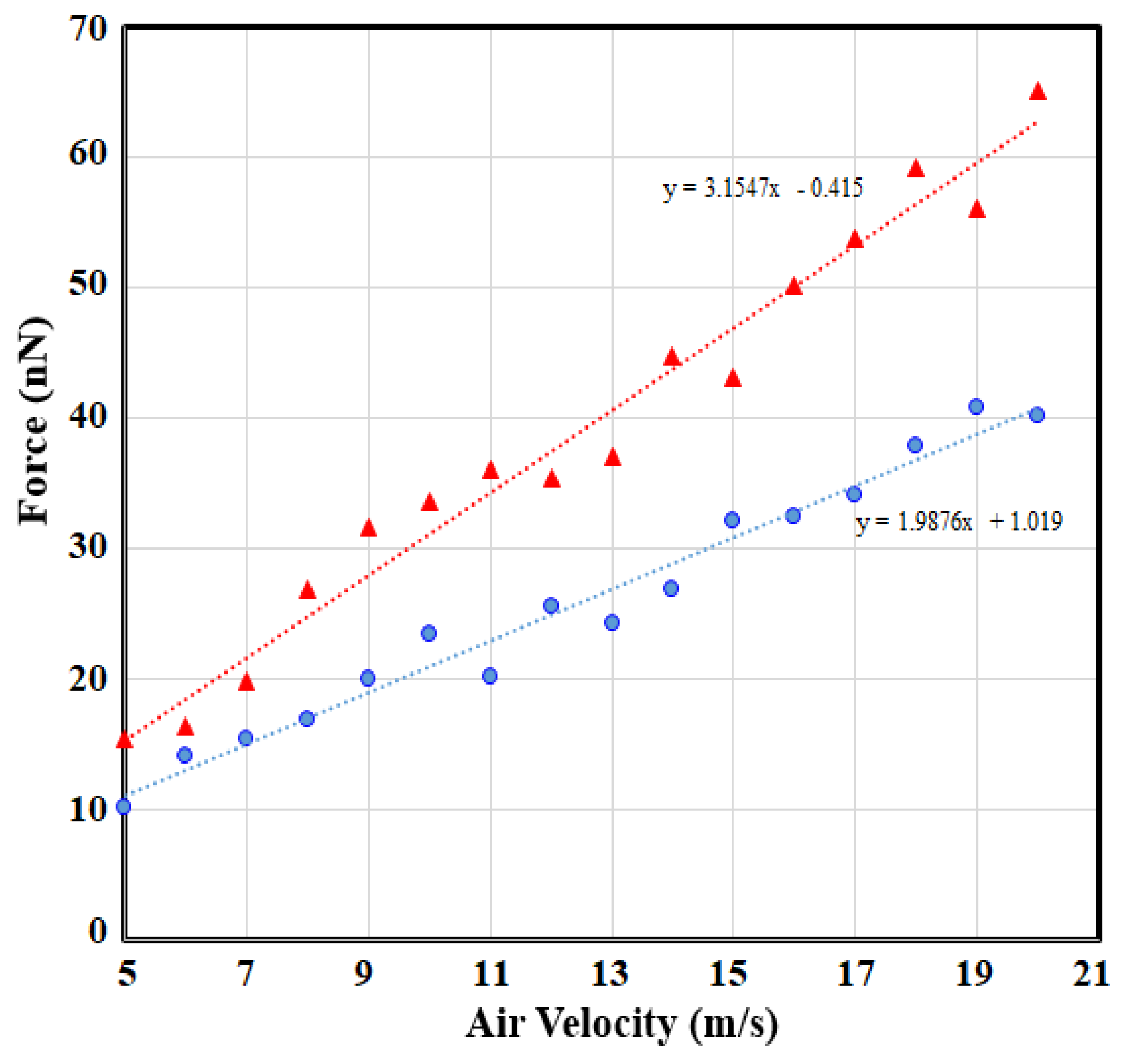 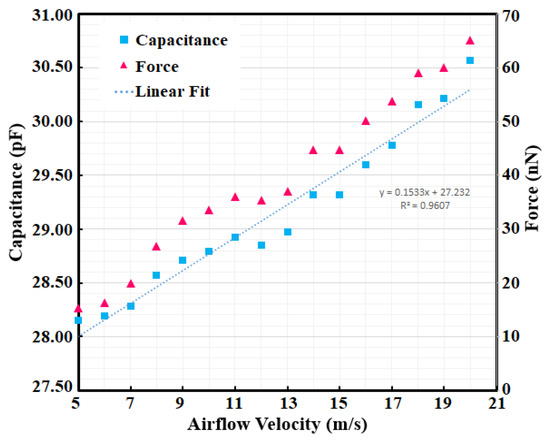 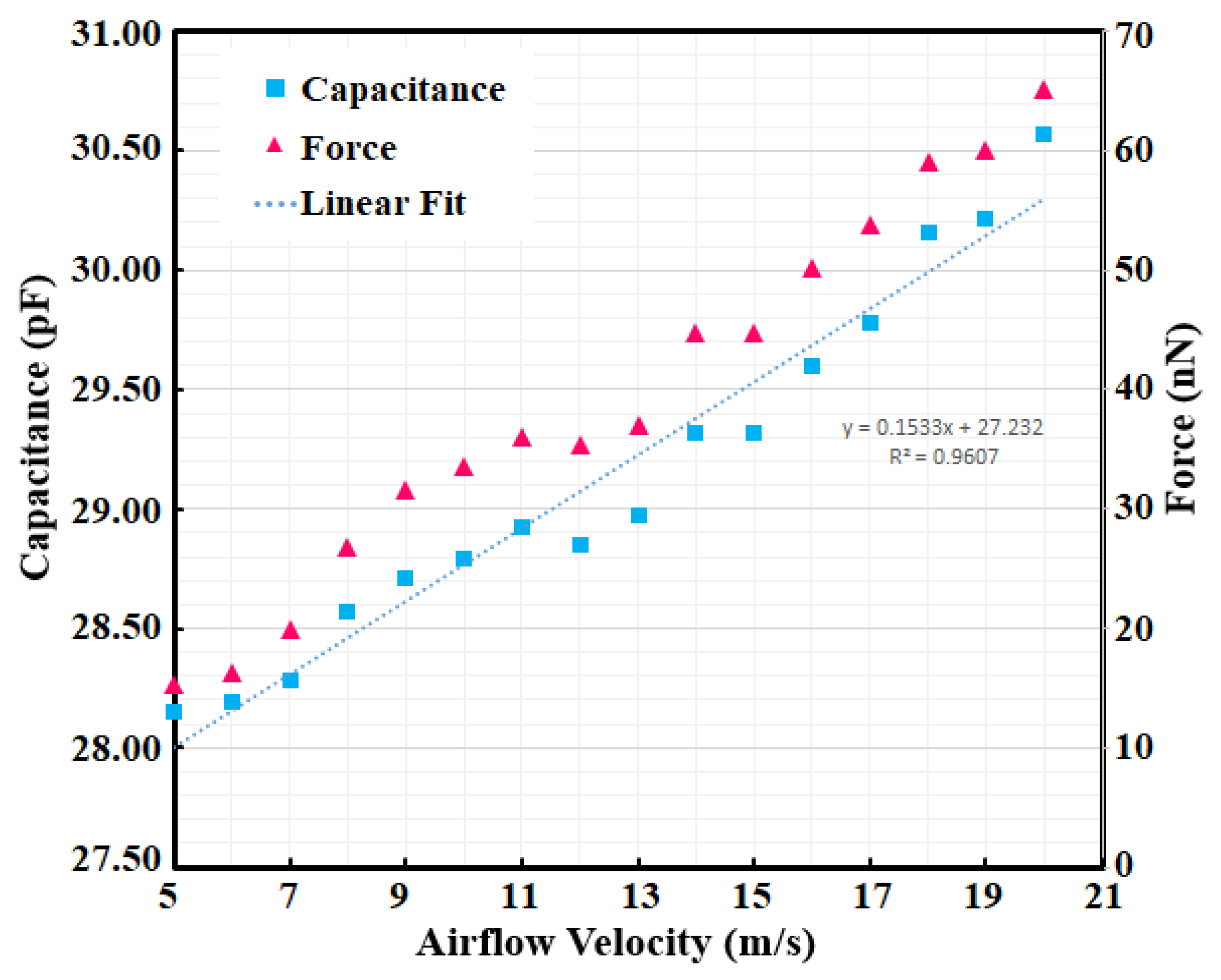 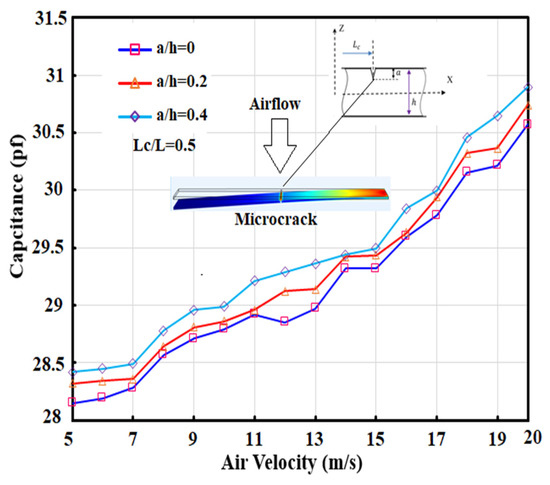 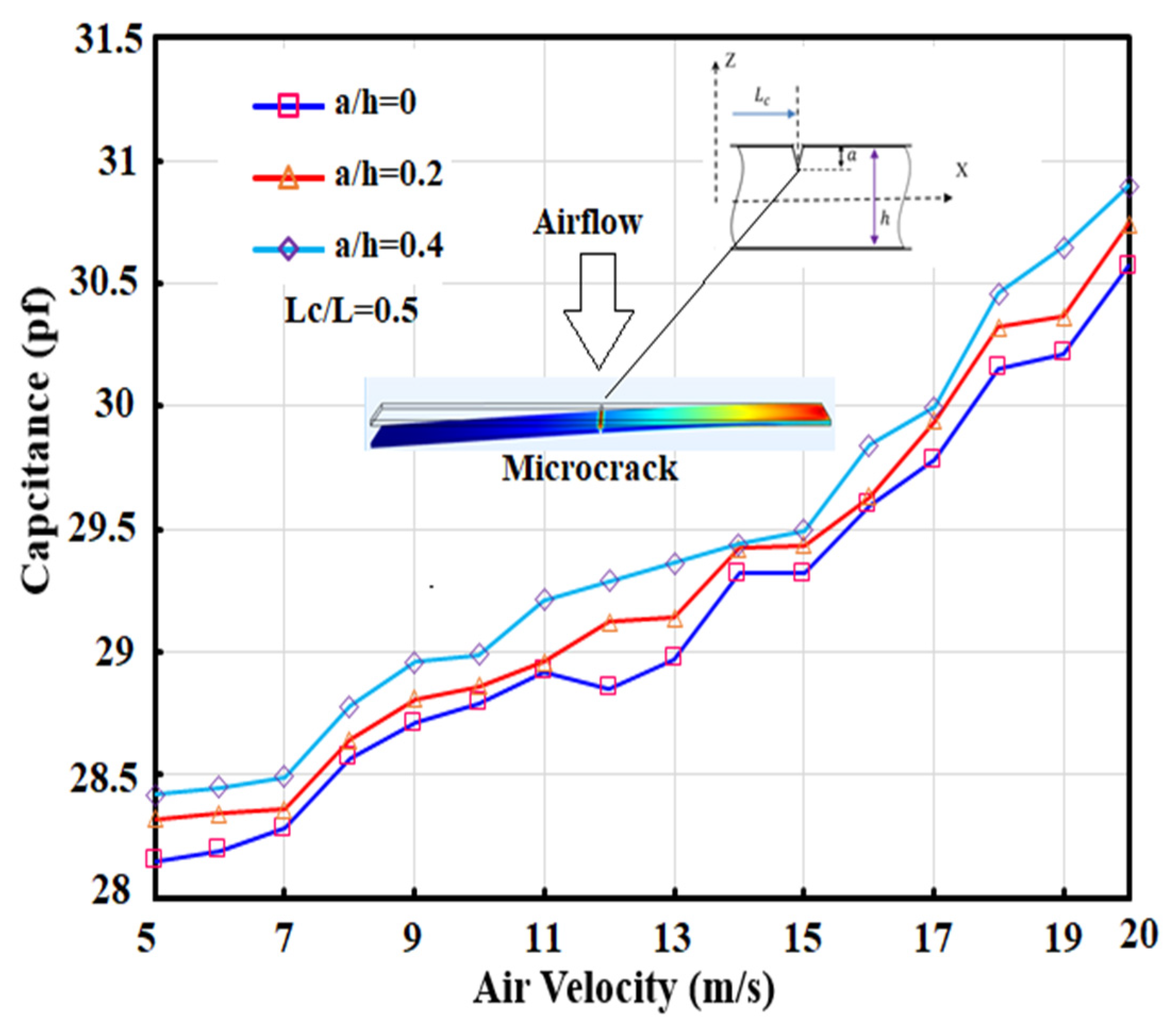 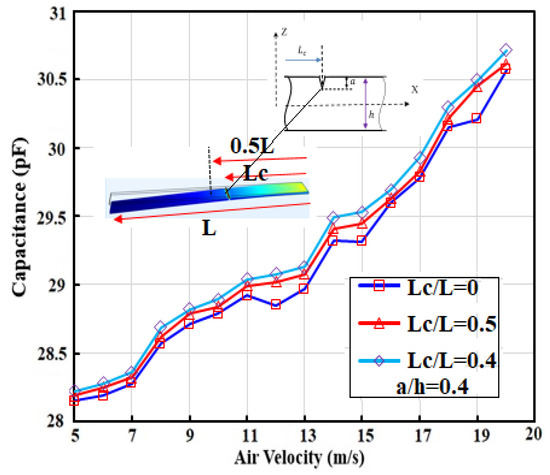 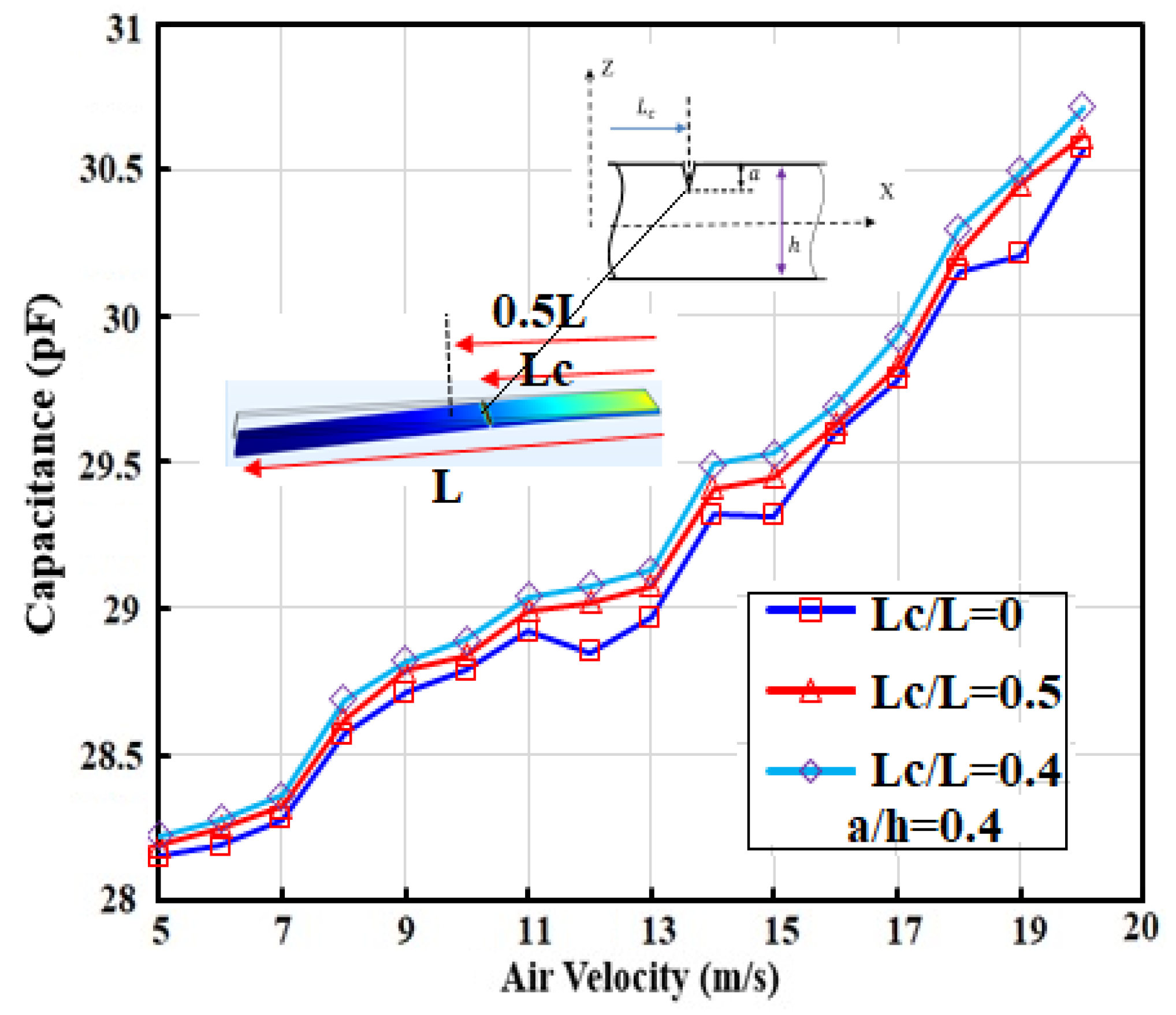