The transmission of zoonotic filarial parasites by black flies has so far been reported in the Chiang Mai and Tak provinces, Thailand, and the bites of these infected black flies can cause a rare disease—human zoonotic onchocerciasis. However, species identification of the filarial parasites and their black fly vectors in the Chiang Mai province were previously only based on a morphotaxonomic analysis. In this study, a combined approach of morphotaxonomic and molecular analyses (mitochondrial cox1, 12S rRNA, and nuclear 18S rRNA (SSU HVR-I) genes) was used to clarify the natural filarial infections in female black flies collected by using human and swine baits from two study areas (Ban Lek and Ban Pang Dang) in the Chiang Mai province from March 2018 to January 2019. A total of 805 and 4597 adult females, belonging to seven and nine black fly taxa, were collected from Ban Lek and Ban Pang Dang, respectively. At Ban Lek, four of the 309 adult females of Simulium nigrogilvum were positive for Onchocerca species type I in the hot and rainy seasons. At Ban Pang Dang, five unknown filarial larvae (belonging to the same new species) were detected in Simulium sp. in the S. varicorne species-group and in three species in the S. asakoae species-group in all seasons, and three non-filarial larvae of three different taxa were also found in three females of the S. asakoae species-group. This study is the first to molecularly identify new filarial species and their vector black fly species in Thailand. View Full-Text
Keywords: Simulium; black fly; Onchocerca spp.; zoonotic onchocerciasis; cox1; 12S rRNA; 18S rRNA Simulium; black fly; Onchocerca spp.; zoonotic onchocerciasis; cox1; 12S rRNA; 18S rRNA
►▼ Show Figures 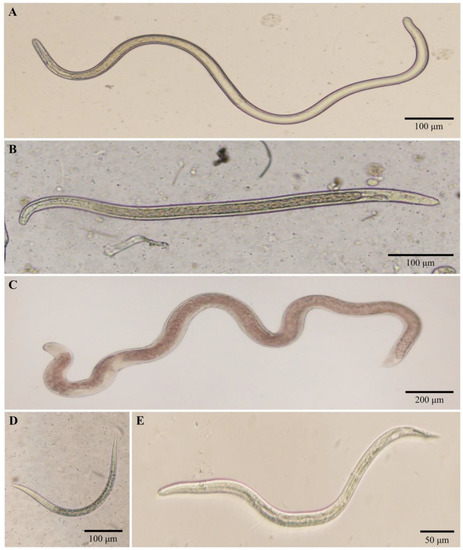