Classical Swine Fever Virus Biology, Clinicopathology, Diagnosis, Vaccines and a Meta-Analysis of Prevalence: A Review from the Indian Perspective

Classical swine fever (CSF) is an economically significant, multi-systemic, highly contagious viral disease of swine world over. The disease is notifiable to the World Organization for Animal Health (OIE) due to its enormous consequences on porcine health and the pig industry. In India, the pig population is 9.06 million and contributes around 1.7% of the total livestock population. The pig industry is not well organized and is mostly concentrated in the eastern and northeastern states of the country (~40% of the country’s population). Since the first suspected CSF outbreak in India during 1944, a large number of outbreaks have been reported across the country, and CSF has acquired an endemic status. As of date, there is a scarcity of comprehensive information on CSF from India. Therefore, in this review, we undertook a systematic review to compile and evaluate the prevalence and genetic diversity of the CSF virus situation in the porcine population from India, targeting particular virus genes sequence analysis, published reports on prevalence, pathology, and updates on indigenous diagnostics and vaccines. The CSF virus (CSFV) is genetically diverse, and at least three phylogenetic groups are circulating throughout the world. In India, though genotype 1.1 predominates, recently published reports point toward increasing evidence of co-circulation of sub-genotype 2.2 followed by 2.1. Sequence identities and phylogenetic analysis of Indian CSFV reveal high genetic divergence among circulating strains. In the meta-analysis random-effects model, the estimated overall CSF prevalence was 35.4%, encompassing data from both antigen and antibody tests, and region-wise sub-group analysis indicated variable incidence from 25% in the southern to nearly 40% in the central zone, eastern, and northeastern regions. A country-wide immunization approach, along with other control measures, has been implemented to reduce the disease incidence and eliminate the virus in time to come. View Full-Text
Keywords: classical swine fever virus; CSFV; swine; genome; phylogeny; diversity; immunobiology; diagnosis; vaccines; publication bias; prevalence; meta-analysis; India classical swine fever virus; CSFV; swine; genome; phylogeny; diversity; immunobiology; diagnosis; vaccines; publication bias; prevalence; meta-analysis; India
►▼ Show Figures 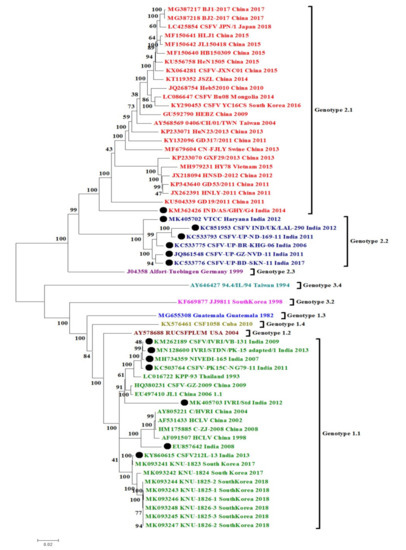