Transcriptomic Analysis of the Early Strobilar Development of Echinococcus granulosus

Human babesiosis is an emerging tick-born disease caused by members of the genus Babesia, which are similar to Plasmodium parasites that cause malaria as both of them are intraerythrocytic protozoan parasites. Babesia divergens, Babesia microti, and Babesia duncani cause the most human babesiosis cases worldwide [1]. Babesiosis is mostly transmitted by tick bite and also by blood transfusion and organ transplantation [2,3]. The clinical symptoms of babesiosis patients can range from flu-like mild to malaria-like severe symptoms, and patients who undergo immune disease (e.g., acquired immune deficiency syndrome (AIDS)), immunosuppressive therapies, and splenectomy can suffer more severe manifestations, and even death [1]. To date, cases of human babesiosis in the USA have been increasing in the past two decades, and babesiosis was added to the list of nationally notifiable diseases by the Centers for Disease Control and Prevention (CDC) in 2011 [4].
In the United States, B. microti and B. duncani are commonly recognized and identified in humans. Even though B. duncani was firstly described in Washington State as strain WA1 in 1991 [5], a total of 1119 cases infected by B. duncani were identified in the U.S. and Canada during 2011–2017 [6], indicating that B. duncani had been detected and diagnosed widely in North America. Although intraerythrocytic stages of B. duncani are morphologically indistinguishable from B. microti, based on the phylogenetic analysis (18S RNA gene, ITS2 gene, Cyt b gene, and Cox I gene) B. duncani n. sp. are in a distinct clade separated from B. microti [7,8]. According to the treatment experience of physicians, B. duncani was harder to treat than B. microti, and patients typically required longer anti-babesiosis treatment [6]. Moreover, in animal models, B. duncani can give rise to more severe clinical and hematological presentation and then eventually death in hamsters and mice [9].
To date, drugs and drug combinations are still the predominant weapons to treat human babesiosis due to the absence of vaccines. The current treatments for babesiosis are drug combinations of atovaquone plus azithromycin or clindamycin plus quinine [10]. In some cases, babesia infections can be refractory, and recrudescence of infection may occur after therapy, even in persistence for more than two years [11,12]. Furthermore, clinical studies revealed that both treatment regimens are associated with significant adverse effects, and in the group treated with clindamycin + quinine, a much higher percentage suffered adverse effects than those who were treated with atovaquone + azithromycin (72% vs. 15%) [9]. These deficiencies emphasize the need for more effective therapies that target persistence while having fewer side effects.
B. duncani culture can be established continuously and long-term ex vivo in hamster or human erythrocytes [1,13,14], whereas only short-term culture can be achieved with B. microti. Hence, B. duncani is an appropriate species of choice for convenient drug screens for developing more effective human babesiosis treatment. However, there is no literature that reported results of drug screens on B. duncani in vitro or in vivo so far. Furthermore, Abraham et al. (2018) revealed that, in human erythrocytes, B. duncani showed high tolerance to routine therapies [14]. Thus, it is necessary to develop new therapeutic options for human babesiosis.
Essential oils containing volatile chemical compounds extracted from plants are widely used in aromatherapy, food reservation, and also potentially in medical therapy, especially with recent concerns about antibiotic resistance [1,15,16]. Certain essential oils have been discovered that have antibacterial activity against multidrug-resistant Gram-negative clinical isolates [17]. In our previous studies, we have identified many essential oils with good activity against Borrelia burgdorferi and Bartonella henselae, which usually can cause co-infections with Babesia sp. through tick transmission [18,19]. In this study, we screened a panel of 97 essential oils for activity against B. duncani and identified some promising active hits. We showed that some active hits in combination with other drugs to be more potent than the current treatment for human babesiosis.

2.1. In Vitro Screening of Essential Oils for Inhibitory Activity against B. duncani

Given garlic oil and black pepper oil were the best anti-Babesia essential oils in our primary screening, we also tested their potential active ingredients, diallyl disulfide (DADS) and β-caryophyllene (BCP). DADS is the major constituent of garlic oil. BCP exists in many essential oils, such as black pepper, cloves, oregano, rosemary, and ylang-ylang, and these essential oils indeed showed inhibitory efficacy in this study (Table S1). The approximate quantity range of BCP in different black pepper cultivars is 7–38% [20]. Interestingly, DADS and BCP showed similar high activity against B. duncani, and the IC50 values were 0.00084% (6.7 μg/mL; 46 µM) and 0.0014% (13 μg/mL; 64 μM), respectively. The values were a little bit higher than those of their corresponding essential oils. For comparison, we additionally tested the front-line clinical drugs atovaquone and azithromycin in our drug testing system. The IC50 values of atovaquone and azithromycin were 0.25 μM (0.092 μg/mL) and 1.8 μM (1.3 μg/mL), respectively (Figure 1), which is comparable to their results when tested in vitro in human erythrocytes [14].

2.3. Morphological Changes of Treated B. duncani

Morphology of B. duncani observed after treatment of atovaquone, azithromycin, garlic oil, black pepper oil, DADS, and BCP at their respective concentrations of 2× IC50 value was compared with untreated control after 72 h exposure (Figure 2). B. duncani treated by atovaquone appeared to have plenty of dot or granule forms with tiny cytoplasm and condensed chromatin (Figure 2B), and that treated by azithromycin showed ugly, disintegrated, and teratogenic parasites (Figure 2C). Both black pepper oil- and BCP-treated B. duncani changed to elongated strand form located near the rim of erythrocytes (Figure 2E,G), while the morphology of B. duncani treated by garlic oil and DADS (Figure 2D,F) did not show significant difference from that of the untreated one (Figure 2A).

2.4. Subculture Studies to Evaluate the Viability of B. duncani Treated with Atovaquone, Azithromycin, Garlic Oil, DADS, and Their Combinations

Hamster whole blood was collected from Golden Syrian hamsters (Charles River) by cardiac puncture using phosphate buffered saline (PBS) containing 15 mM EDTA as anticoagulant according to protocols approved by the Johns Hopkins Institutional Animal Care and Use Committee. Blood was washed three times by centrifugation at 500× g for 15 min at 4 °C in PBS, 15 mM EDTA solution with careful removal of the supernatant and buffy coat at each wash. After the last wash, red blood cells (RBCs) were resuspended at a concentration of 50% hematocrit in Puck’s saline glucose buffer with extra glucose (20 g glucose/L) and stored at 4 °C less than 2 weeks before use.

Babesia duncani strain WA1 (ATCC® PRA-302™) was cultured in vitro in HaRGM medium as described by Abraham et al. (2018) with slight modifications [14]. Briefly, 500 μL of cryopreserved culture was used to infect hamsters through intraperitoneal injection and monitor blood parasitemia every day. When the parasitemia reached approximately to 10%, blood was collected by cardiac puncture after isoflurane anesthesia. Washed, infected RBCs (10 μL) were mixed with 90 μL of fresh hamster uninfected RBCs and resuspended in 1.2 mL warm HaRGM and then dispensed into a single well of a 24-well plate. Specifically, 1.2 mL of medium had a depth of 0.7 cm in the 24-well plate for generating a microaerophilic condition [54]. The plate was inoculated at 37 °C under an atmosphere of 5% CO2 with 95% humidity. The overlying medium was removed and replaced with fresh HaRGM daily. When the RBCs laid on the bottom turned dark and black, 10 μL of infected RBCs of which parasitemia had been confirmed by Giemsa stain was mixed with 90 μL of fresh uninfected RBCs then cultivated into a new well of the 24-well plate.

4.3. In Vitro Evaluation of Essential Oils and Other Chemicals on Inhibition of B. duncani

A total of 97 commercially available essential oils were purchased from Plant Therapy (Twin Falls, ID, USA), Natural Acres (St. Louis, MO, USA), or Plant Guru (Plainfield, NJ, USA) and were used as we described previously [18,19]. Essential oils were prepared in 0.1% (v/v) stock solution in DMSO then added to 96-well plates containing 200 μL of infected hamster RBCs at 2% parasitemia and 2.5% hematocrit each well to obtain final concentrations of 0.001%. Cultures were incubated at 37 °C for 72 h without replacing medium in a chamber with an atmosphere of 5% CO2 with 95% humidity. Then 2 μL of RBCs sediments were removed into 100 μL of lysis buffer consisting of 20 mM Tris, pH 7.4, 5 mM EDTA, 0.008% saponin, 0.08% Triton X-100, and 2× SYBR Green I (10,000× stock, Invitrogen) in 96-well plates. The plates were inoculated at 37 °C in the dark for 60 min followed by plate reading at excitation wavelength at 490 nm and a fluorescence intensity at 520 nm in microplate reader (HTS 7000 plus Bio Assay Reader, PerkinElmer Inc., Waltham, MA, USA). We selected those essential oils that showed more than 50% inhibitory effect at 0.001% (v/v) after 72 h exposure for a further IC50 susceptibility assay. For the IC50 susceptibility assay, B. duncani WA1 cultures were exposed to increasing concentrations of garlic oil, black pepper oil, diallyl disulfide (DADS), β-caryophyllene (BCP), atovaquone, azithromycin, and their combinations. Each IC50 was performed in triplicates in 96-well plates with a starting 2% parasitemia and 2.5% hematocrit in 200 μL of culture medium followed by SYBR Green I as described above. GraphPad Prism (version 7.0) was used to generate dose–response curves by fitting a nonlinear regression curve to the data and then get the best-fit IC50 values. The Giemsa-stained thin blood smears of B. duncani after garlic oil, black pepper oil, DADS, BCP, atovaquone, and azithromycin exposure at 2× IC50 concentration for morphology observation using BZ-X710 All-in-One fluorescence microscope (KEYENCE, Inc., Itasca, IL, USA).

4.4. Subculture Studies to Assess Viability of B. Duncani Treated with Garlic Oil, DADS, Atovaquone, Azithromycin, and Their Combinations

B. duncani was treated with garlic oil, DADS, atovaquone, azithromycin, and their combinations at various concentrations in 96-well plate culture system as described above. For garlic oil and DADS, the treated concentrations used were 1×, 1.25×, 1.50×, and 1.75× IC50 value; For atovaquone and azithromycin, the treated concentrations used were 1×, 2×, 4×, 8× IC50 value. After 72 h treatment, treated RBCs were washed three times in HaRGM and then inoculated in fresh hamster RBCs at the ratio of 1:5. Subcultures were cultured in 96-well plate containing 200 μL of infected hamster RBCs at 2% parasitemia and 2.5% hematocrit each well at 37 °C in a chamber with an atmosphere of 5% CO2 with 95% humidity. Subsequently, 1 μL of RBCs from each well was taken and stored at −80 ℃ every one or two days until erythrocytes or controlled uninfected erythrocytes began to lyse. The growth of the subculture was examined by SYBR Green I stain, and the fluorescence units of day 0 were normalized as 0.

We acknowledge the support by Global Lyme Alliance and the Steven and Alexandra Cohen Foundation, NatCapLyme, and the Einstein–Sim Family Charitable Fund. We thank BEI Resources for providing Babesia duncani strain WA1 (ATCC® PRA-302™) used in this study. 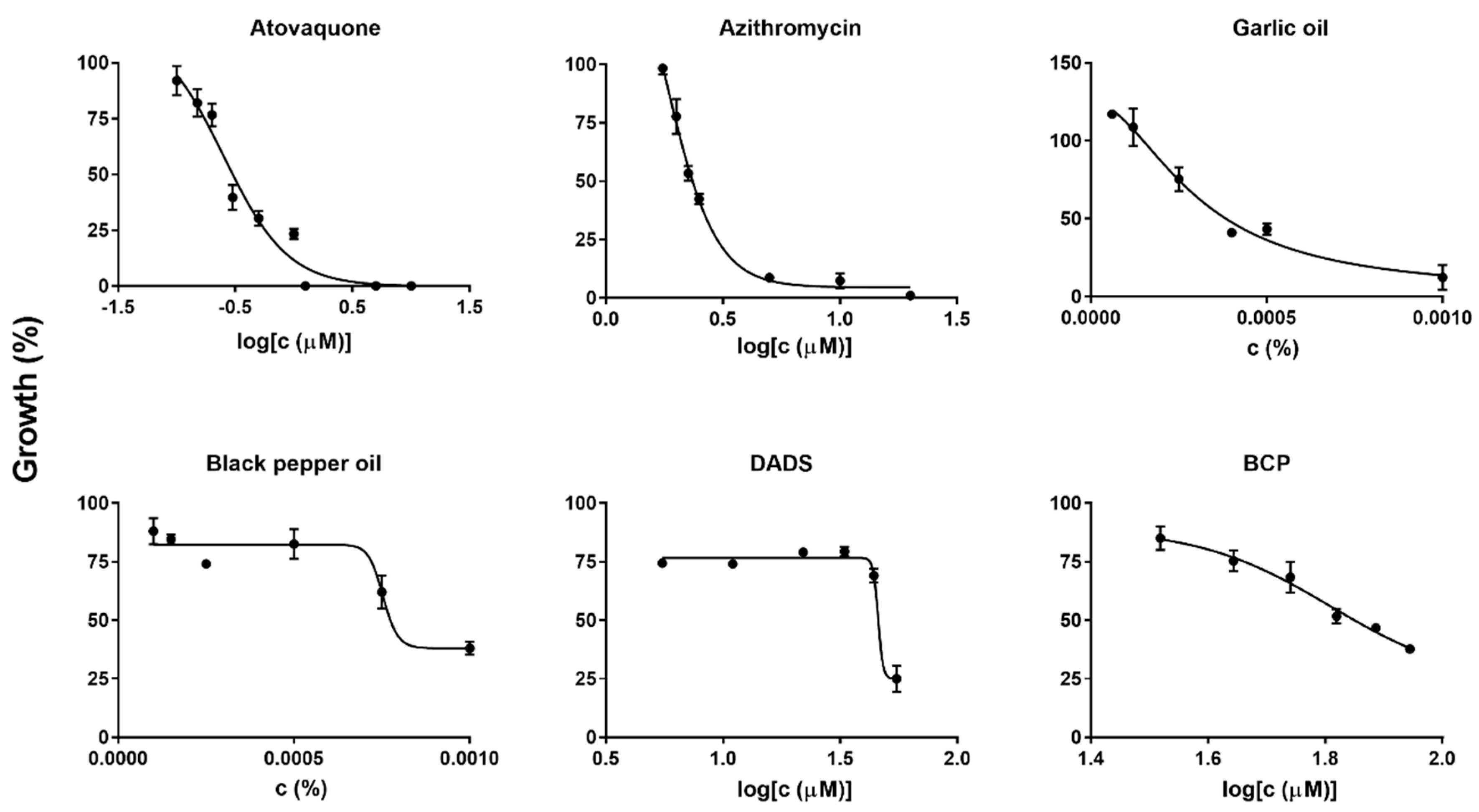 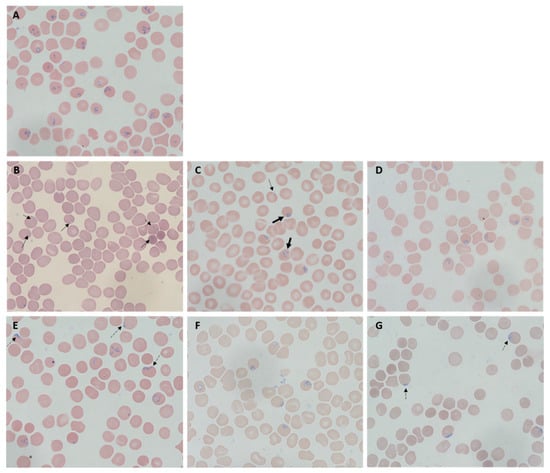 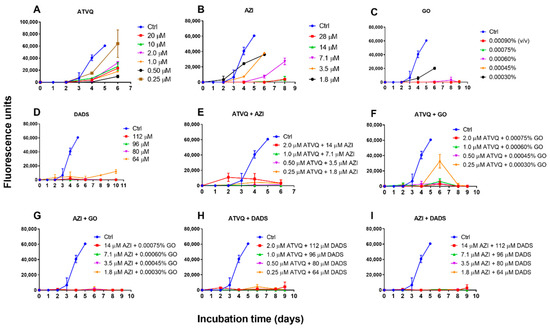 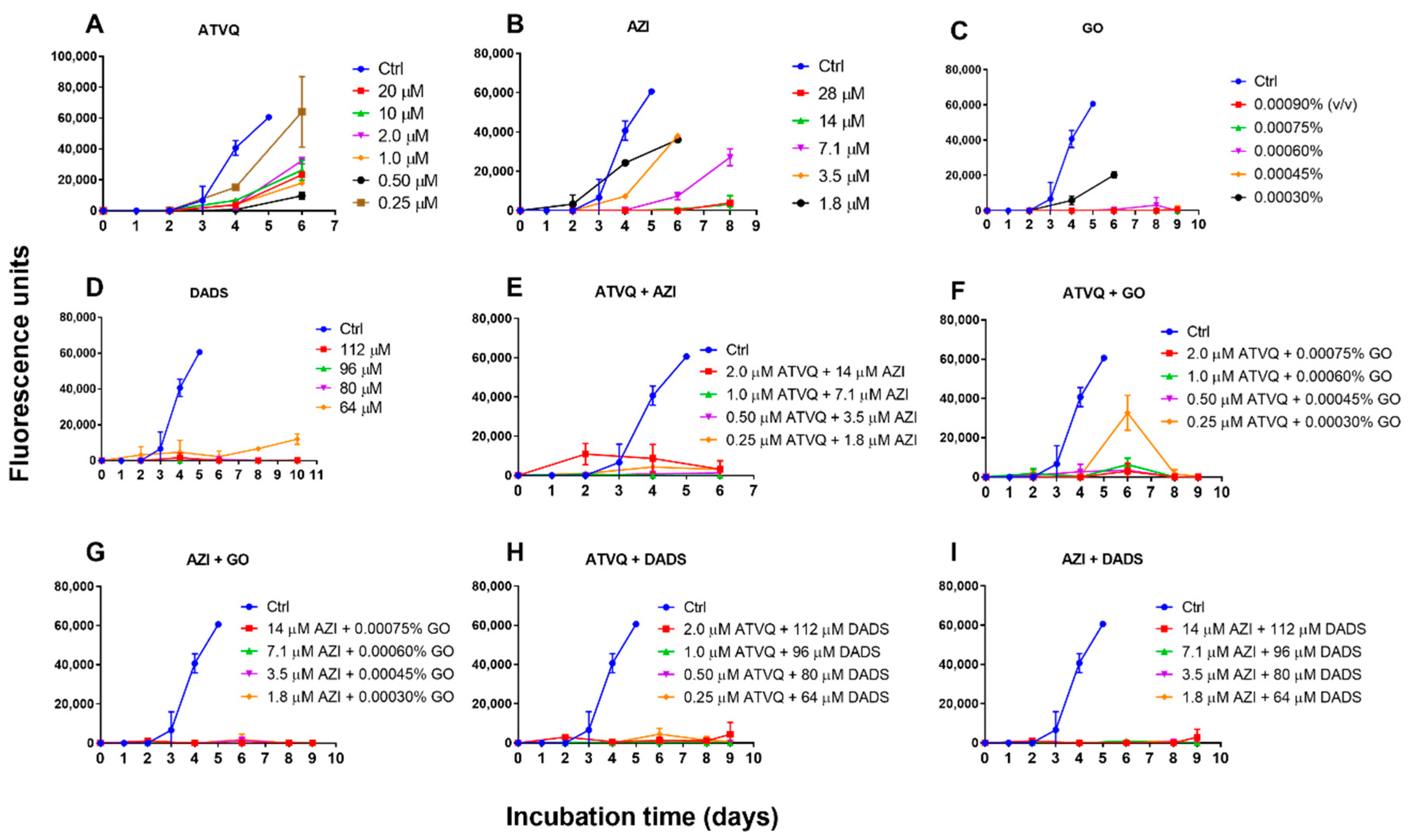