Cytokines and Chemokines in Chikungunya Virus Infection: Protection or Induction of Pathology
Next Article in Special Issue

Prevention and Control of Legionella and Pseudomonas spp. Colonization in Dental Units

Exposure to Legionella spp. contaminated aerosols in hotel settings confers risk for travel-associated Legionnaire’s disease (TALD). In this study, we investigated the prevalence of Legionella contamination and its molecular diversity in hotels and resorts across Israel. The study was comprised of a convenience sample of water systems from 168 hotels and resorts countrywide, routinely inspected between March 2015 and February 2017. Isolation and quantitation of Legionella were performed in a water laboratory using the ISO 11731 method. The distribution of Legionella isolates was analyzed according to geography and source. The genetic diversity of a subset of isolates was analyzed by sequence-based typing (SBT) at the National Reference Laboratory for Legionella and compared to the national database. Out of 2830 samples tested, 470 (17%) obtained from 102 different premises (60% of hotels) were positive for Legionella spp. In 230 samples (49% of all positive, 8% of total samples), accounting for 37% of hotels, Legionella spp. counts exceeded the regulatory threshold of 1000 CFU/L. The most frequently contaminated water sources were cooling towers (38%), followed by faucets, hot tubs, water lines, and storage tanks (14–17% each). Furthermore, 32% and 17% of samples obtained from cooling towers and hot tubs, respectively, exceeded the regulatory thresholds. SBT was performed on 78 strains and revealed 27 different sequence types (STs), including two novel STs. The most prevalent STs found were ST1 (26%), ST87 (10%), ST93 (6%), and ST461 and ST1516 (5% each). Several L. pneumophila STs were found to be limited to certain geographical regions. This is the first study to investigate the prevalence and diversity of Legionella in hotels and resorts in Israel during non-outbreak environmental inspections. These findings will inform risk assessment, surveillance, and control measures of TALD.
Keywords: Legionella pneumophila; SBT; molecular diversity; hotels Legionella pneumophila; SBT; molecular diversity; hotels

Legionella is a Gram-negative bacterium found ubiquitously in aqueous environments, which can multiply quickly in man-made water systems [1]. Legionella spp. have a complex life cycle, and exist in the environment as free-living bacteria in microbial consortia of environmental organisms or as intracellular pathogens. L. pneumophila has plenty of virulence factors, which it uses effectively to infect aquatic protozoa or human lung alveolar macrophages [2].
L. pneumophila is the major causative agent of Legionnaires’ disease (LD), a severe pneumonia with a fatality rate of up to 15%, and a flu-like illness called Pontiac fever [3,4]. Humans can contract the disease during exposure to contaminated water aerosols generated by hot and cold water systems, cooling towers, showering facilities, and spa pools [5]. Legionella bacteria is an opportunistic pathogen [2]. The risk factors include old age, underlying diseases, and smoking [6]. Although many Legionella spp. are considered potentially pathogenic for humans, Legionella pneumophila (Lp) causes the vast majority of LD cases, and of the 16 known Lp serogroups (sg), sg1 accounts for over 80% of LD cases [7,8].
Legionellosis is often associated with staying in hotel accommodations, and LD is recognized as a major form of travel-associated pneumonia (TALD) [9]. Since 2010, TALD cases have accounted for 20% of all reported LD cases in Europe each year. The number of cases reported to the European TALD surveillance scheme continues to rise annually, with a 20% increase observed between 2014 and 2015 [10]. Moreover, Legionella pneumophila has significant outbreak potential. Since its first fatal outbreak in a hotel in Philadelphia, United States, in 1976, many clusters and outbreaks linked to hotel settings have been investigated globally [11,12,13,14]. Factors shown to contribute to the Legionella spp. spread and colonization are the complexity, old age, and poor maintenance of a distribution system, warm water temperature, and the presence of amoebae [1,15,16,17]. Several recent studies have focused on the prevalence and distribution of Legionella in water systems of hotels in non-outbreak situations. These studies revealed variable rates of contamination and species diversity [18,19,20,21], but limited data is published on the molecular diversity of Legionella spp. in hotel settings [22,23,24].
In Israel, where international and domestic tourism is an important branch of the national economy, TALD has accounted for 15% of all LD cases between 2006 and 2011 [25]. According to recent national epidemiology surveillance data of the Ministry of Health, the majority of TALD cases in Israel are sporadic or imported from abroad, and no major change in trends was observed during the last decade. While isolates from TALD cases undergo molecular typing, a few of them have been linked to a specific accommodation sites. It is likely that a great proportion of cases go unnoticed, due to the mild symptoms and underdiagnosis, the long incubation period of Legionella spp., and the short-term nature of domestic tourism. Of note is that no comprehensive data are available concerning the abundance of Legionella spp. in Israeli hotel water systems. In this study, we investigated, for the first time, the prevalence and characteristics of environmental Legionella spp. in the Israeli hotel setting as part of routine inspections.

During the study period, 2830 water specimens were collected routinely from the water systems of 168 hotels and resorts in six districts across Israel. Legionella spp. were isolated from 470 samples (17%) originating from 102 (60%) hotels. The percentage of Legionella-positive samples was lower in the Southern, Jerusalem, and Tel Aviv districts (13%, 15%, and 14%, respectively), of which the largest number of samples was submitted (1139, 794, and 447 samples). A higher level of contamination was found in the North (40%), but only 42 samples were collected (Table 1 and Figure 1). In 230 samples (49% of all positive, 8% of total samples), accounting for 37% of hotels, Legionella spp. concentrations exceeded the national regulatory thresholds. The percentage of exceeding samples per district ranged from 6% to 33% (Table 1).
Analysis of Legionella spp. prevalence according to sample source showed that both cold and hot water distribution systems were colonized. The leading contaminated water sources were cooling towers (38%), followed by hot tubs, outlets, and main water lines (14–17% each). Of 277 Legionella-positive water samples from the outlets representing hotel rooms, 166 (59.9%) and 111 (40.1%) were from hot and cold water systems, respectively. The respective positivity rates were 15.3% and 17.1%. Levels exceeding regulatory Legionella counts were detected in 84 samples from the outlets, of which 67 samples (79.7%) originated from hot and 17 (20.2%) from cold water systems. The respective exceedance rates above regulatory thresholds were 6.2% and 2.6%. The majority of contaminated main water lines represented hot water distribution systems and accounted for 63 (92.6%) of 68 positive samples from water lines. Only five (7.3%) positive samples were from cold water lines. Of 35 samples with levels of contamination exceeding regulatory thresholds, 33 (94.2%) were from hot water lines at a rate of 8.6%. In 74 (32%) of 232 samples from cooling towers, and 36 (17%) of 218 samples from hot tubs, levels of Legionella spp. exceeded the regulatory thresholds of 1000 CFU/L established for potable water and the 1 CFU/100 mL threshold for the hot tubs (Table 2).

Serotyping of a convenience sample comprised of 162 isolates revealed that 104 isolates (64%) from 44 hotels belonged to sg2–14, and 53 (33%) isolates from 22 hotels were sg1. Both sg1 and sg2–14 were found in the water systems of nine hotels. Two percent of isolates (4/162) for which serogroup identification failed and one recognized by the kit as Legionella spp. were subjected to mip sequencing, and subsequently identified as L. pneumophila and L. bozemanii, respectively. Overall, Lp accounted for the vast majority of the 162 serotyped isolates (99%).
Furthermore, we analyzed serogroup prevalence according to sample type. The majority of sg2–14 isolates were recovered from hot and mixed water samples, and accounted for 81 (77.8%) of the 104 isolates. Lp sg1 isolates were predominant in cold water systems, and 40 (75.4%) of the 53 isolates originated from cold water.

In total, 2830 convenience samples from 168 hotels and resorts were collected via routine surveillance, according to the regulations of the Israeli Ministry of Health for the prevention of Legionella growth in water distribution systems and hot tubs [51]. The study took place between March 2015 and the end of February 2017 across six Israeli districts (Northern, Center, Southern, Haifa, Tel Aviv, and Jerusalem). Hotels and other tourist accommodation are obliged by the regulations to monitor their water systems for the presence of Legionella spp. The minimum mandatory testing routine schedule depends on the hotel’s size: once every two years for sites containing <50 rooms, once a year for those with 50–300 rooms, and twice a year for those with >300 rooms. Both hot and cold water distribution systems should be tested as part of this procedure. For hot tubs, the minimum sampling routine is quarterly. Selection of the sampling points depends on a hotel water system maintenance plan and is comprised of hot and cold water from outlets representing the rooms (faucets, showers) and mains (hot water return lines, hot and cold water supply, and storage tanks): cold water from cooling towers, decorative fountains, pools, air conditioning systems, and cold/hot/mixed water from hot tubs. Samples were taken after flushing for 2 minutes and the disinfection of the outlet, as per the requirements of the Israeli Public Health guidelines for routine monitoring of water distribution systems [51]. In addition, following regulatory requirements, water systems with Legionella concentrations above the thresholds of 1000 CFU/L for potable water and 1 CFU/100 mL for hot tubs were re-tested after the appropriate treatment [51]. Overall, of the 168 hotel water systems included in this study, 119 were probed at least twice. At each sampling point, 1–2 water samples (hot and/or cold water) were collected in 1 L sterile plastic bottles containing sodium thiosulfate, in order to neutralize the residual-free chlorine. All water samples were stored at 4 °C and processed within 24 h of their collection.
The detection and quantitation of Legionella spp. were performed in a certified water testing laboratory per the ISO 11731-2:2004 method [52]. Potable and non-potable water samples were filtered with 0.45 µm sterile gray membrane filter paper, treated with 30 mL of acid buffer containing 0.2 M KCL and 0.2 M HCL for 5 min, and washed with 20 mL of PAGE’s saline. Water samples originated from cooling towers and fountains were processed in four dilutions (1:10000, 1:1000, 1:100, and 1:10), in order to avoid the overgrowth of microbial flora. Membranes were transferred to Glycine Vancomycin Polymyxin Cycloheximide (GVPC) medium (cat. no. 257007, BD, Heidelberg, Germany) and after incubation at 35 ± 0.5 °C for 10 days, colonies suggestive of Legionella spp. were subcultured to Buffered Charcoal Yeast Extract (BCYE) and 5% sheep blood agar media (P073 and P049, HyLabs, Rehovot, Israel). Subsets of representative isolates identified as Legionella spp. were regularly referred to the National Reference Laboratory for Legionella at the Ministry of Health, according to regulations [51].
The total amount of 164 Legionella isolates from hotel water systems was obtained during the two-year study. Serotyping was performed with the Legionella Latex Test kit (Cat. No. DR0800, Oxoid, Basingstoke, UK).
Strains not readily confirmed by serotyping as L. pneumophila were identified to species level by sequencing the mip gene, as described by Ratcliff et al. [7], and comparing the sequence to the mip database [53]. The molecular characterization of L. pneumophila strains was conducted according to the European Society of Clinical Microbiology and Infectious Diseases (ESCMID) Study Group for Legionella Infections (ESGLI) sequence-based typing (SBT) scheme [54,55]. The choice of the isolates subjected to SBT monthly was based on the data provided by the referring laboratory and guided by epidemiological and risk assessment criteria, such as high Legionella CFU counts, a source type with high public health risk potential, or a new sampling site. After the exclusion of duplicate isolates arising from the same sampling points, 78 isolates were examined in this study. Sequences obtained by Sanger sequencing were analyzed with the BioNumerics software (Version 7.6, Applied Maths) and compared to the ESGLI database for assigning the ST. New allelic profiles were submitted to the ESGLI SBT database [56]. The strain diversity index was calculated according to the modified method of Hunter and Gaston [57].
BioNumerics software (Version 7.6, Applied Maths) was used for phylogenetic analysis. Clustering was created using the unweighted pair group method with arithmetic averages (UPGMA) [58]. The minimum spanning tree (MST) was created using a predefined MST for the categorical data template, with single- and double-locus variance priority rules. Geomap was created using ArcGIS Pro 2.5 (Esri, Redlands, CA, USA). 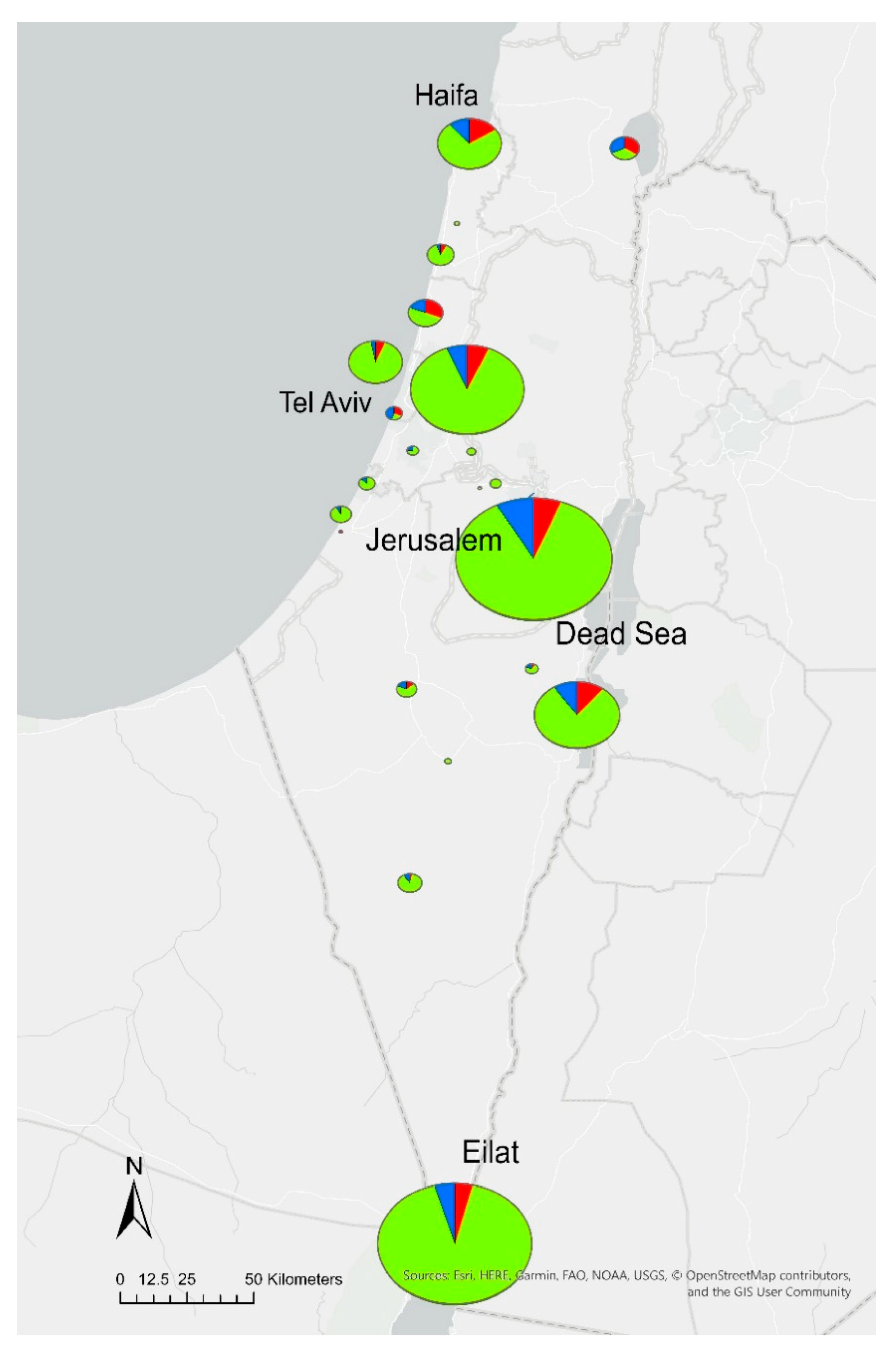 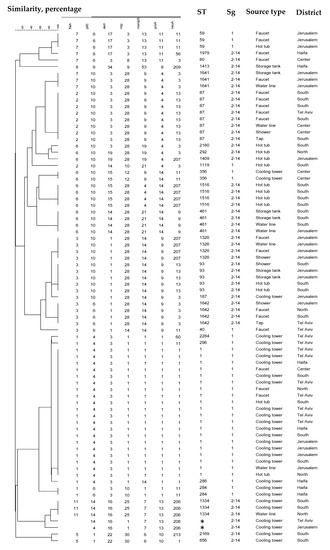 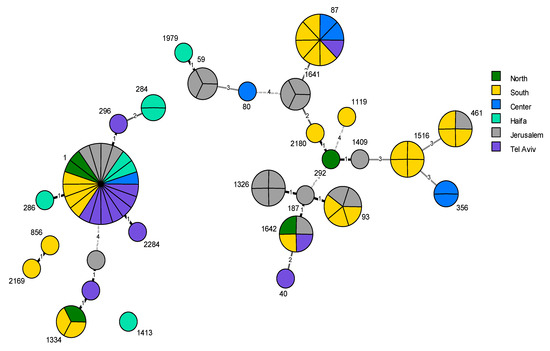