The Ebola virus (EBOV) harbors seven genes, one of which is the matrix protein eVP40, a peripheral protein that is sufficient to induce the formation of virus-like particles from the host cell plasma membrane. eVP40 can form different structures to fulfil different functions during the viral life cycle, although the structural dynamics of eVP40 that warrant dimer, hexamer, and octamer formation are still poorly understood. eVP40 has two conserved Trp residues at positions 95 and 191. The role of Trp95 has been characterized in depth as it serves as an important residue in eVP40 oligomer formation. To gain insight into the functional role of Trp191 in eVP40, we prepared mutations of Trp191 (W191A or W191F) to determine the effects of mutation on eVP40 plasma membrane localization and budding as well as eVP40 oligomerization. These in vitro and cellular experiments were complemented by molecular dynamics simulations of the wild-type (WT) eVP40 structure versus that of W191A. Taken together, Trp is shown to be a critical amino acid at position 191 as mutation to Ala reduces the ability of VP40 to localize to the plasma membrane inner leaflet and form new virus-like particles. Further, mutation of Trp191 to Ala or Phe shifted the in vitro equilibrium to the octamer form by destabilizing Trp191 interactions with nearby residues. This study has shed new light on the importance of interdomain interactions in stability of the eVP40 structure and the critical nature of timing of eVP40 oligomerization for plasma membrane localization and viral budding. View Full-Text
Keywords: Ebola virus; lipid–protein interaction; oligomerization; phosphatidylserine; phosphatidylinositol-4,5-bisphosphate; tryptophan; virus assembly; virus budding; VP40 Ebola virus; lipid–protein interaction; oligomerization; phosphatidylserine; phosphatidylinositol-4,5-bisphosphate; tryptophan; virus assembly; virus budding; VP40
►▼ Show Figures 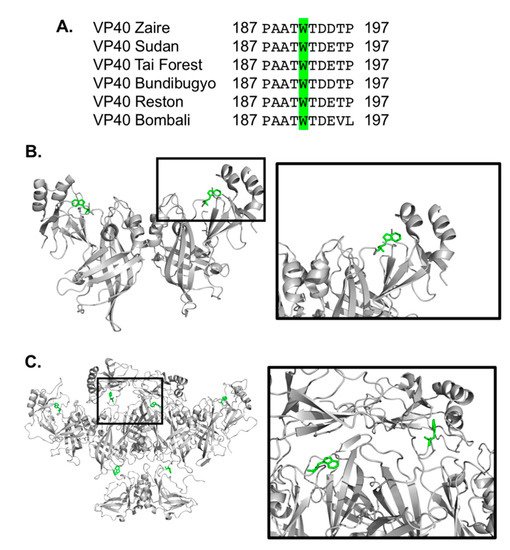