Methicillin-resistant Staphylococcus aureus (MRSA) sequence type (ST)398 is a livestock associated (LA) lineage with zoonotic potential, especially in humans with live pig contact. The objective of this study was to characterize two S. aureus strains of lineage ST398 (one methicillin-resistant (MRSA), one methicillin-susceptible (MSSA)) isolated from the same nasal sample of a patient admitted in the Intensive-Care Unit of a Spanish Hospital, and with previous occupational exposure to live pigs, by whole-genome-sequencing (WGS). The sample was obtained during routine surveillance for MRSA colonization. Purified genomic DNA was sequenced using Illumina HiSeq 2000 and processed using conventional bioinformatics software. The two isolates recovered were both S. aureus t011/ST398 and showed similar resistance-phenotypes, other than methicillin susceptibility. The possession of antibiotic resistance genes was the same, except for the mecA-gene located in SCCmecV in the MRSA isolate. The MSSA isolate harbored remnants of a SCCmec following the deletion of 17342bp from a recombination between two putative primases. Both isolates belonged to the livestock-associated clade as defined by three canonical single-nucleotide-polymorphisms, and neither possessed the human immune evasion cluster genes, chp, scn, or sak. The core genome alignment showed a similarity of 99.6%, and both isolates harbored the same mobile genetic elements. The two nasal ST398 isolates recovered from the patient with previous occupational exposure to pigs appeared to have a livestock origin and could represent different evolutionary steps of animal-human interface lineage. The MSSA strain was formed as a result of the loss of the mecA gene from the livestock-associated-MRSA lineage. View Full-Text
Keywords: MRSA; SCCmec remnant; ST398; whole genome sequence; pig worker MRSA; SCCmec remnant; ST398; whole genome sequence; pig worker
►▼ Show Figures 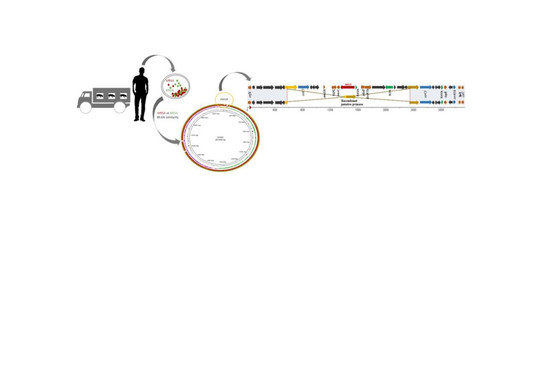