West Nile virus (WNV) continues to be a major cause of human arboviral neuroinvasive disease. Susceptible non-human vertebrates are particularly diverse, ranging from commonly affected birds and horses to less commonly affected species such as alligators. This review summarizes the pathology caused by West Nile virus during natural infections of humans and non-human animals. While the most well-known findings in human infection involve the central nervous system, WNV can also cause significant lesions in the heart, kidneys and eyes. Time has also revealed chronic neurologic sequelae related to prior human WNV infection. Similarly, neurologic disease is a prominent manifestation of WNV infection in most non-human non-host animals. However, in some avian species, which serve as the vertebrate host for WNV maintenance in nature, severe systemic disease can occur, with neurologic, cardiac, intestinal and renal injury leading to death. The pathology seen in experimental animal models of West Nile virus infection and knowledge gains on viral pathogenesis derived from these animal models are also briefly discussed. A gap in the current literature exists regarding the relationship between the neurotropic nature of WNV in vertebrates, virus propagation and transmission in nature. This and other knowledge gaps, and future directions for research into WNV pathology, are addressed. View Full-Text
Keywords: West Nile virus; pathology; animal models; flavivirus; review West Nile virus; pathology; animal models; flavivirus; review
►▼ Show Figures 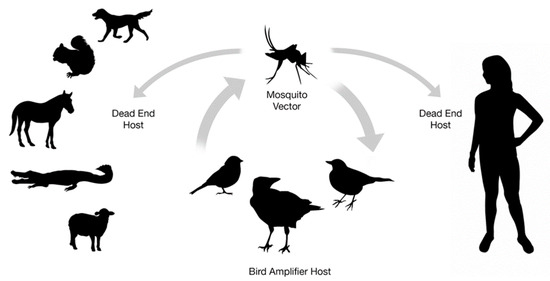