Tasked with a Challenging Objective: Why Do Neutrophils Fail to Battle Pseudomonas aeruginosa Biofilms

Microbial biofilm has been implicated in a wide range of chronic infections. In spite of the fact that Rhodococcus equi is a recognized cause of chronic disease in animals and humans, few studies have focused on the sessile phenotype of R. equi. The aim of this research was to phenotypically characterize the biofilm development of R. equi and its answerability for hypo-responsiveness to macrolides and rifampicin. Biofilm formation is initiated by bacterial adhesion to the surface. In this work, the ability of R. equi to adhere to the surface of human lung epithelial cells was detected by a fluorometric adhesion test performed on 40 clinical isolates. Subsequently, the capability of R. equi to produce biofilm was investigated by colorimetric, fluorescence and scanning electron microscopy analysis, revealing a general slow growth of rhodococcal biofilm and different sessile phenotypes among field isolates, some also including filamented bacteria. Azithromycin treatment produced a higher long-term inhibition and dissolution of R. equi biofilms than rifampicin, while the two antibiotics combined boosted the anti-biofilm effect in a statistically significant manner, although this was not equally effective for all R. equi isolates. Increasing the MIC concentrations of drugs tenfold alone and in combination did not completely eradicate pre-formed R. equi biofilms, while a rifampicin-resistant isolate produced an exceptionally abundant extracellular matrix. These results have strengthened the hypothesis that biofilm production may occur as an antibiotic tolerance system in R. equi, potentially determining persistence and, eventually, chronic infection. View Full-Text
Keywords: biofilm formation; respiratory infection; biofilm dissolution; biofilm inhibition; scanning electron microscopy; fluorescence analysis biofilm formation; respiratory infection; biofilm dissolution; biofilm inhibition; scanning electron microscopy; fluorescence analysis
►▼ Show Figures 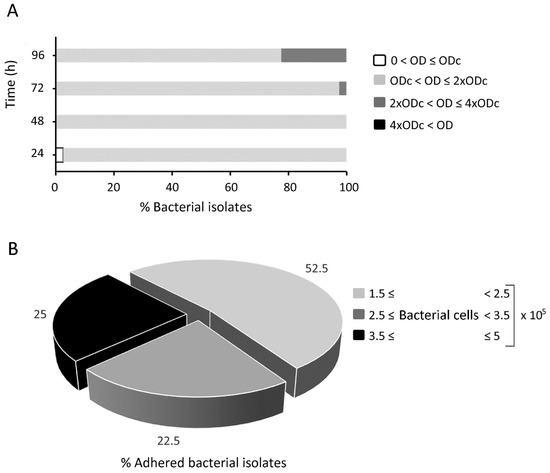